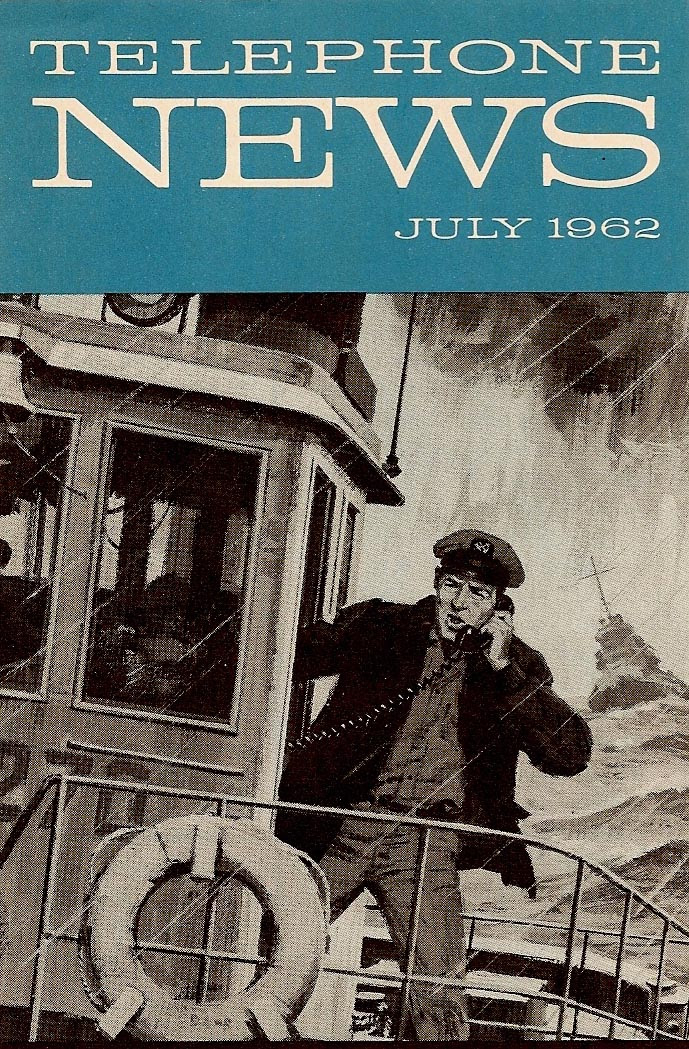 Back in the 1920's I can recall my grandparents farm home a few miles south of Fresno. In the evening my grandmother would hold a match to gas lights that hung from the ceiling. Also remember my grandfather yelling into the mouthpiece of a wooden box wall phone, with a crank on the side. And, yep, it was a three party line! 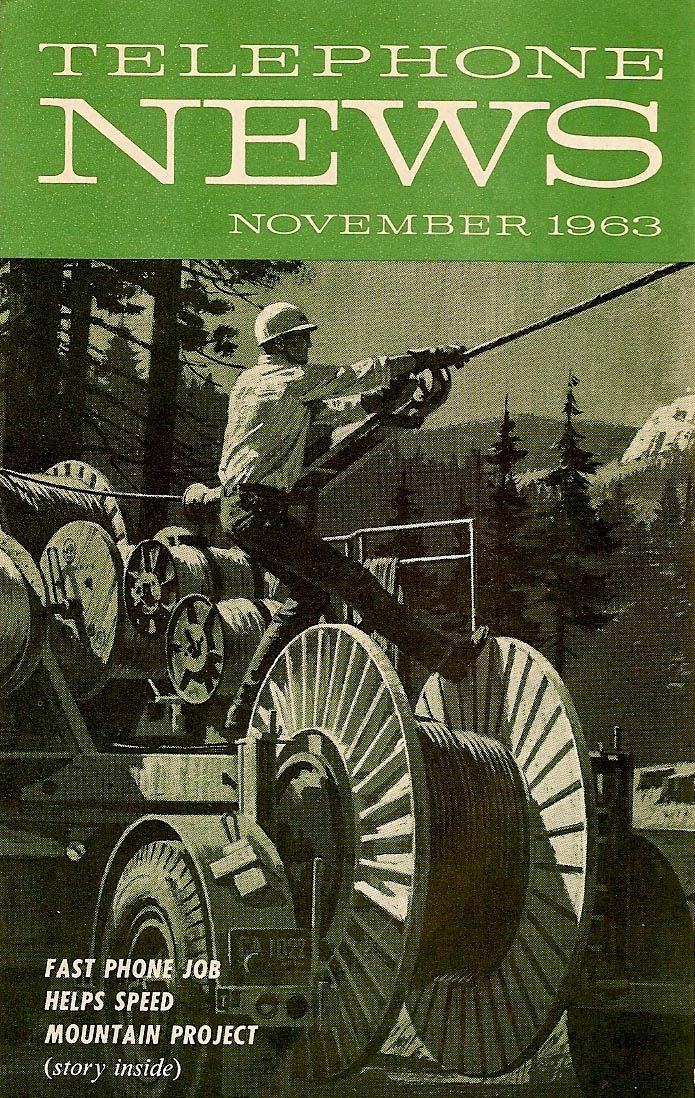 The 1950's and 60's were 'modern times' when I illustrated about two dozen 'Telephone News' mailers which were sent out with monthly bills. Modern times are relative, however! Today's fiber-optic 'information highway', wireless cell phone mania, as well as digital camera and computer combos were unheard of in those days. 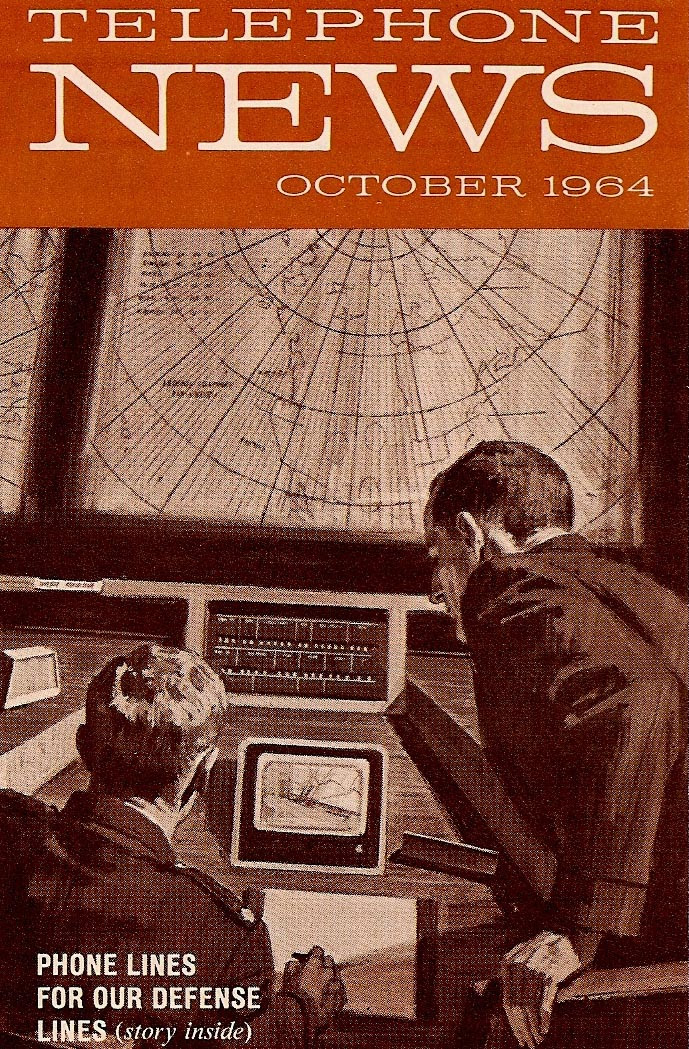 BBD&O and Pac Tel were very good clients then, providing both newspaper ads and 'Telephone News' assignments. They had interest and variety....a real plus for me. Pac Tel or BBD&O came up with photos of cable trucks, tractors, hardware, etc., but the figures and compositions were left to the artist. 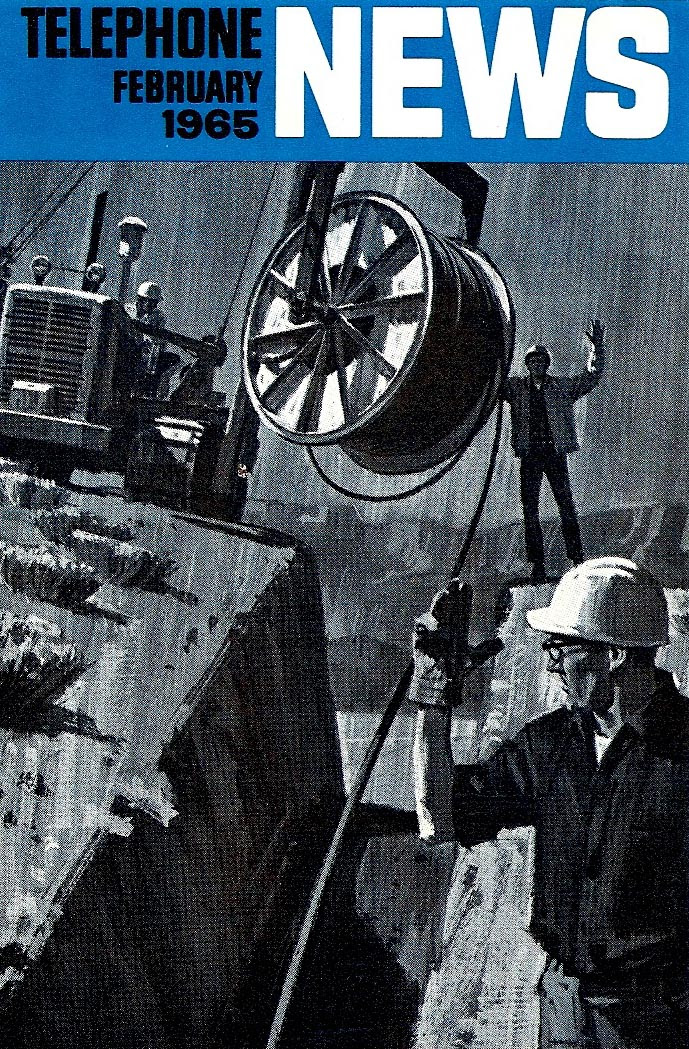 As I recall, some of the duotones were painted that way, on others the second color was added by the lithographer using the B&W halftone original. At 3 1/2 x 6 inches, I usually worked 'twice up', or roughly 7 x 10 inches. But...enough shop talk....the illustrations are pretty much self explanatory. 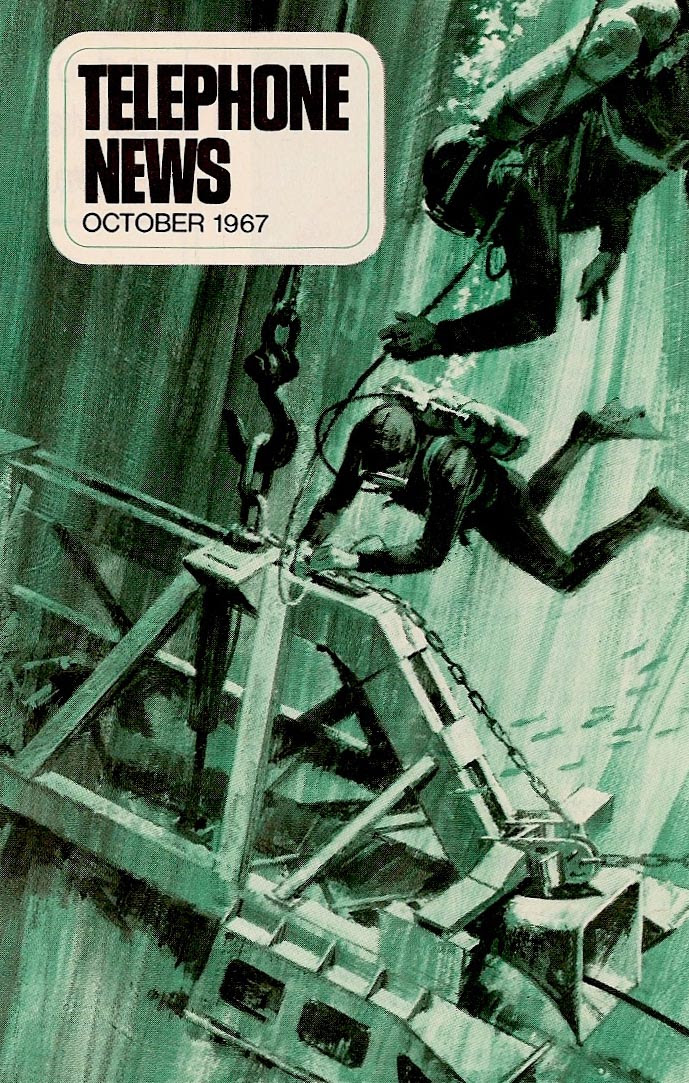 * Charlie Allen's Flickr set.
Posted by leifpeng at 7:17 AM 5 comments:

This week the CAWS will revisit our 'lady of steel' hostess....appropriately attired, as always, for field, farm, factory, or shipping dock in blouse, skirt, and high heels! 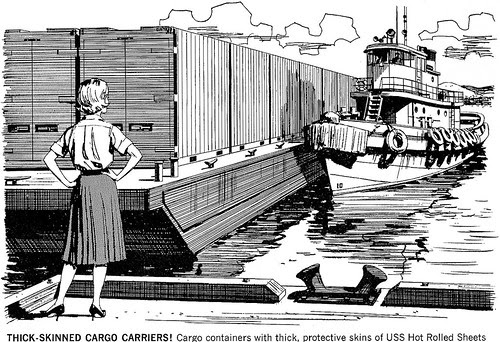 Amusing maybe....but today's ads can be even crazier. Logic and advertising were never equal disciplines. 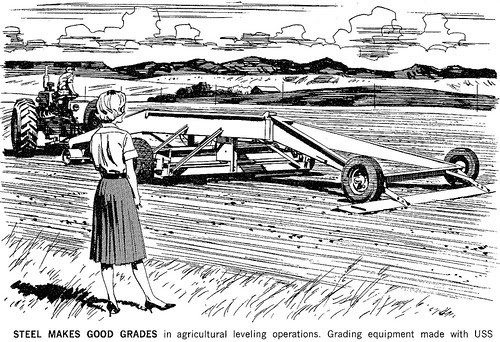 In the 50's and 60's I illustrated at least two dozen B&W US Steel ads....and that times four B&W individual spots totals a lot of illustration from one client. Many were hurried by deadlines, and not very good. But....considering the complexity of many of the subjects, some still hold up pretty well. 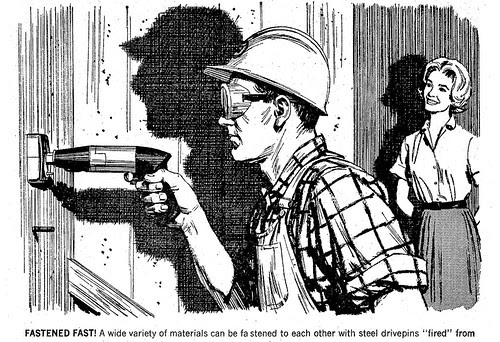 The three below were done before our hostess appeared. Some were printed as a mailer or brochure on quality paper. Others have been scanned from newsprint clips and show their age. Leif asked for a 'heads up' when I posed (usually a Polaroid shot) on ads. The first and last of these qualify. Of course, I always improved the model! 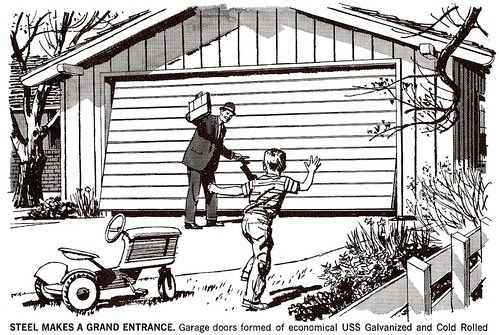 It will be interesting to see if these, and other ads, are too repetitive. 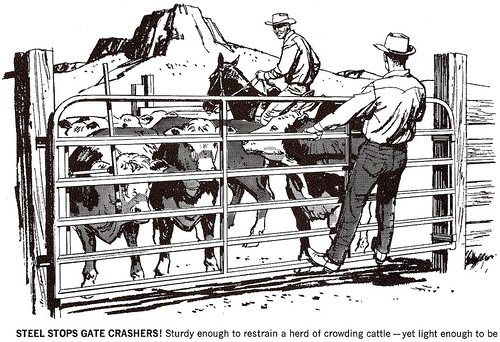 Roughly a dozen large corporations or companies provided most of the lllustration work in San Francisco. 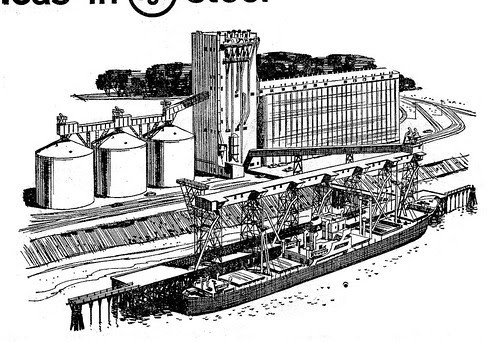 Themes and assignments, such as these ads, were repetitive. To the illustrator, however, each was a new challenge and a new subject....hopefully, still of some interest!

*Take a closer look at the details in these illustrations by clicking the "All Sizes" tab above each image in Charlie Allen's Flickr set.
Posted by leifpeng at 3:34 AM 4 comments:

A press photographer with snap brim fedora, wielding a big 4x5 Speed Graphic camera plus flash gun, was the norm back in the 50's. In their zeal to further the civilian use of aluminum following WW ll, and advertising nationally, Kaiser Aluminum based in Oakland, was considered by agencies and by illustrators a real 'plum' account on which to work. 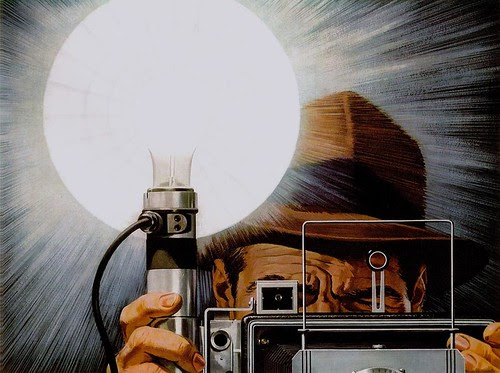 They seemed to me remarkably relaxed about product details....as on this flash reflector...which I believe was chromed brass or steel. Aluminum was used primarily on small consumer flash cameras. The above illustration was the left page of a double page spread in Saturday Evening Post, Newsweek, Time, etc. As shown below, the right page contained six 'spots', as we termed them, depicting aluminum uses. The scenes and product details were very much left to the artist to create. 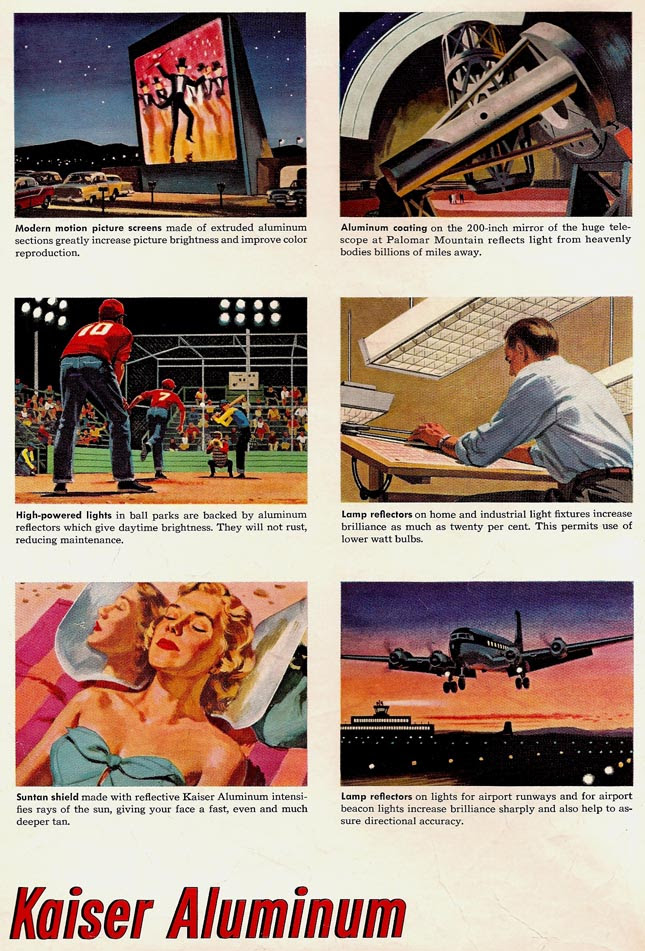 The improbable youngster, below, hoisting an aluminum stroller, was my third 'breakthrough' job in the first two years in San Francisco. 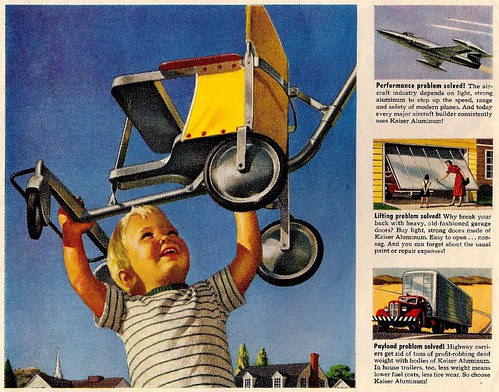 Thanks to the dedicated and enthusiastic salesmanship of Chet Patterson, this was my first national magazine color ad assignment. Once again, Chet persuaded Don Sternloff at Foote, Cone & Belding to try his 'new guy'. It was done in 1950, and, once again, I sweated this one out!

* For the full size versions of these scans go the Charlie Allen's Flickr set.
Posted by leifpeng at 8:33 AM 1 comment:

Several weeks back the subject of hands came up, and it aroused a few slumbering grey cells. Hands, those essential tools for work and every day living and so vital in human communication, have been subjects for artists, photographers, and advertisers for a long time. 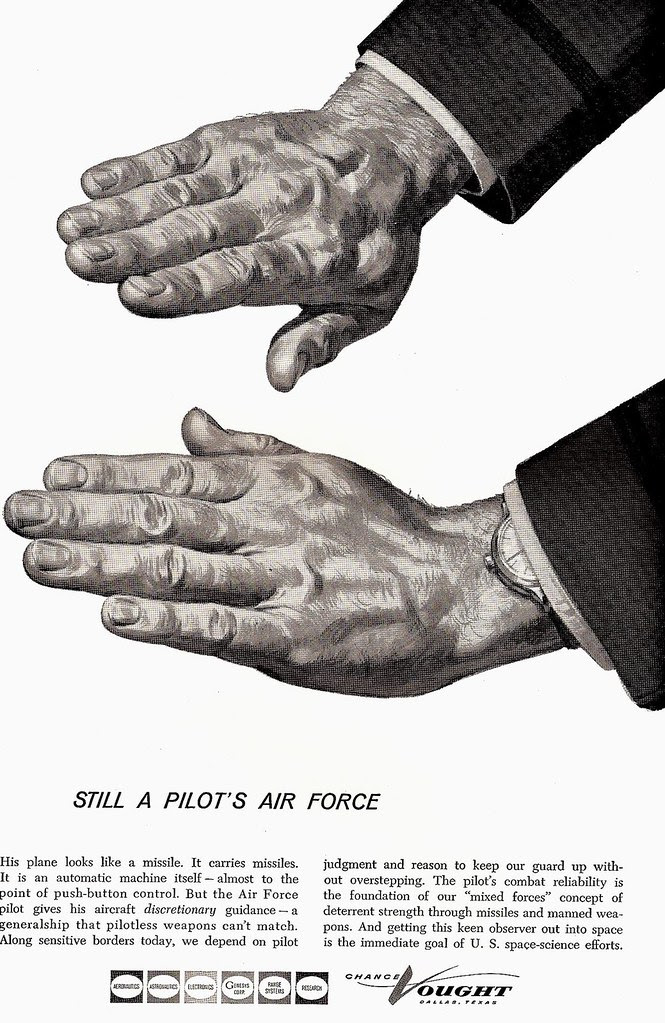 Handshakes, high fives, thumbs up, V for victory signs, hands of strength, of beauty....the list goes on and on....both positive and negative. Can't forget the exuberant fist pump by Tiger Woods on sinking a 40 foot winning putt! Not that dramatic, but over the years I had drawn hands many times. Following are a few examples exhumed from an old proof drawer. 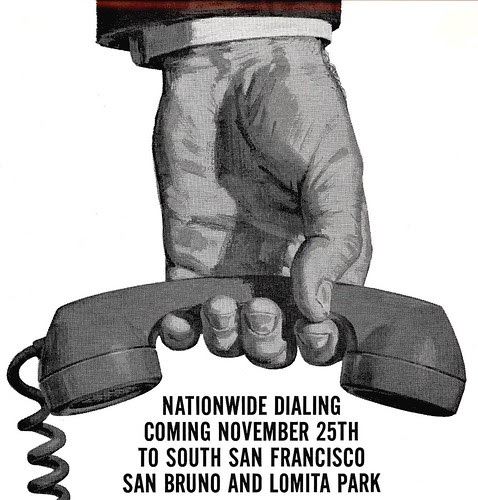 In the example below, middle daughter, Mary Jane, posed for a Standard/Chevron ad in 1957. Back in the 'good old days' when full service, clean restrooms, and leaded high octane were promoted heavily. Oh yes....gas was about 29 cents per gallon! 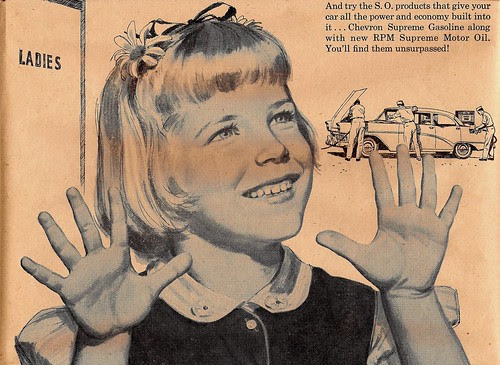 Next, a generic car in 'good hands' for the same folks. 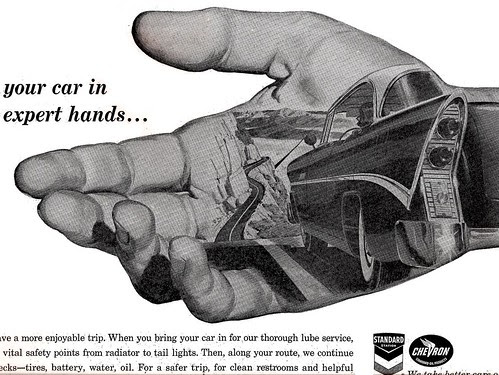 Both were Higgins Ink wash illustrations. The hands for the Pac Tel and Vought Aircraft ads (at top) were done with Perma-Grey gouache paints....better and easier to use than Windsor Newton greys. Finally, a 1950's Kaiser Aluminum ad, done in Windsor Newton Designers Gouache, the usual color medium in those days. Added note, aeronautique: Not sure who 'owned' the big fist in the sky, traveling at about 50 0 knots....we'll call it 'The Force'. 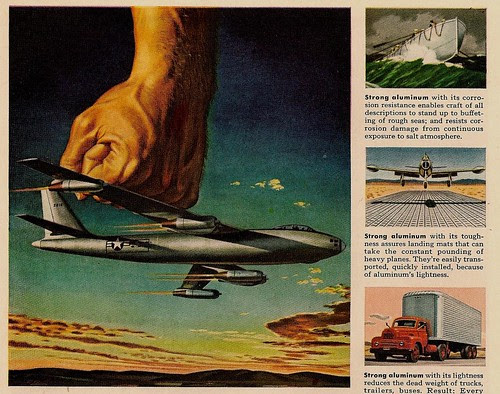 In static testing the force is usually down on a wing. However in flight, the force (and failure mode) is UP. On the next flight, check your jet's wing flexing 3 or 4 feet up in flight. After the AD's concept layout had been through several meetings with Kaiser ad and engineering honchos, mine was not to reason why....just do the illustration....or else!

* Note: After many months, I checked in to Leif's CA Flickr Set last week. It's awesome in size, and still growing! Thanks (I think) to Leif for storing all that ancient stuff. Awesome, too, knowing every flaw....but thinking back, it was always thus. Deadlines provided a necessary but an irrevocable discipline. Good or bad, the jobs went out for all the world to see. I also want to thank the viewers for the interesting comments....and the jokesters are a hoot! Rich and others offer more credit than deserved....and for Picture Book and r8r... gas refrigerators were quiet (no motor), and some foods are noisy!
Posted by leifpeng at 5:15 AM 5 comments: