Mr. Webster defines comprehensive as....."dealing with all or many of the relevant details; including much; inclusive." In ad illustration, right on! As one of the old school, and digitally disadvantaged, I have no idea if the word 'comp' is used in today's advertising and media world. In my thirty or more years illustrating, 'comp' or 'comped' were everyday terms for a sketch in B&W or color shown to an agency or client for approval before finished art was begun. 'Storyboards', or comps before TV commercials are produced, were around back in the 70's. I did a few, and Leif tells me they're still in demand....only in computer form instead of markers. 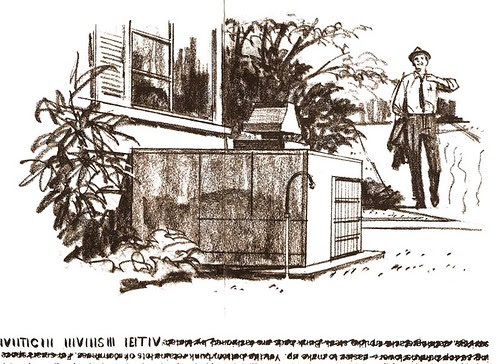 This week's CAWS will show some random comps with a general date.....and more will follow in the weeks to come. Illustrators agreed that their comps were often better, and certainly had more vigor, than a more precise, tightened up, finish. The client would probably not agree! Oddly, in my work, the more important jobs....billboards, most Chevvy ads, Kaiser Aluminum ads, a few others....were comped by the art director, and client approved, before coming over to me. On many 'lesser ' ads, the artist had to provide comps before a finish was ordered.

Below, a 2B pencil comp on bond pad for Hexol, a home and bath disinfectant....in the early 50's. 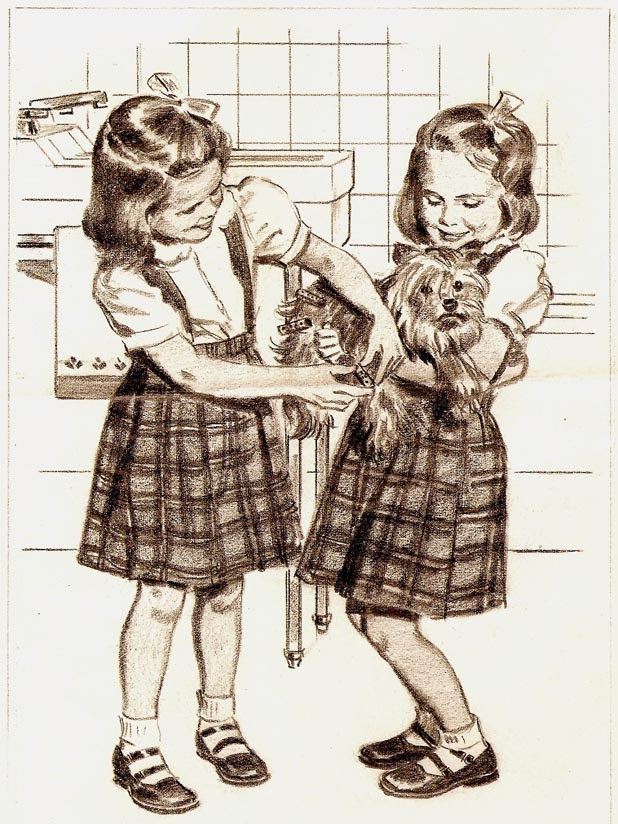 A finished ad, done in ink wash, follows. For some reason the Hexol folks were hooked on the twins idea. No problem....it still just required one model, my daughter, or maybe one of her friends! 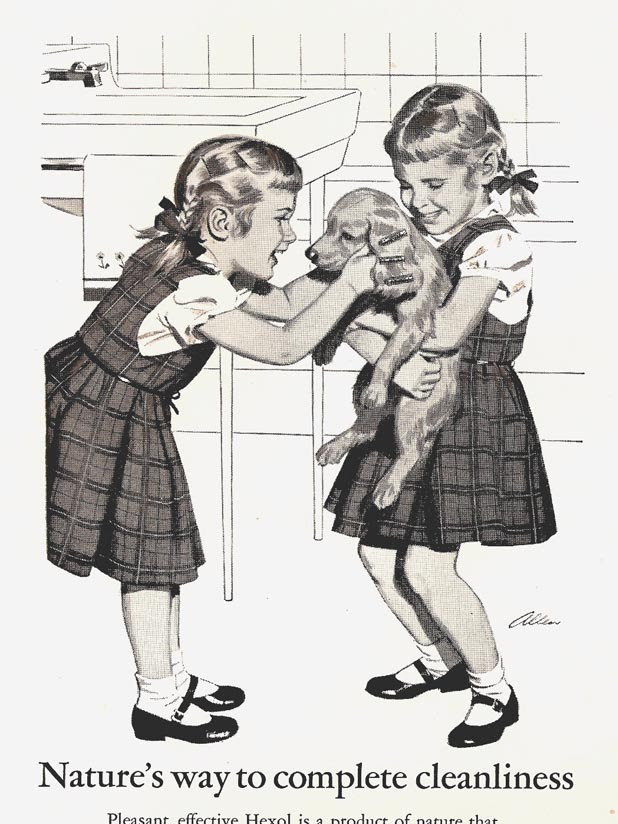 Next, the charcoal pencil sketch of pony, tyke, and dad, for State Fund done in the 70's. Why the tractor tire? I have no idea....and can't recall if it became a finished ad. 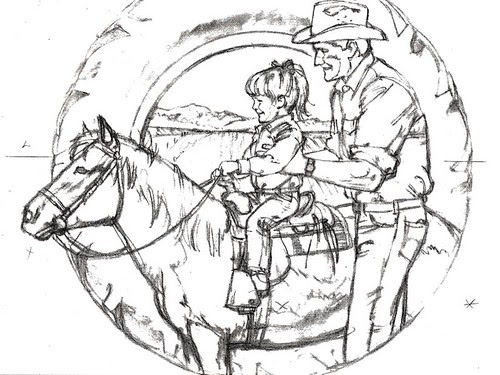 Then two more charcoal pencil comps for US Steel B&W ads. As with the two at the top of this post... 1960's vintage. 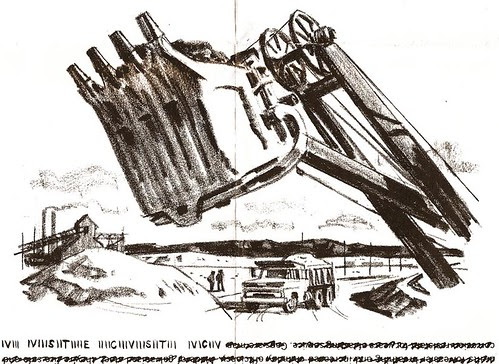 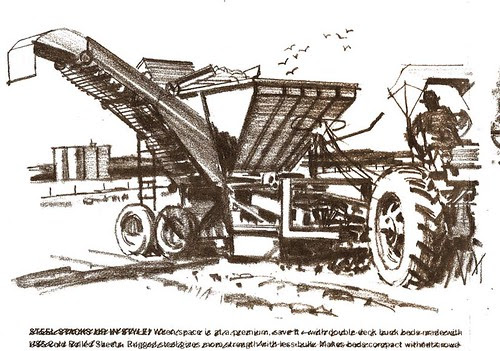 Finally, a charcoal pencil montage, a popular fad in the 70's. It was for a State Fund Ag insurance ad, usually published in farm journals. 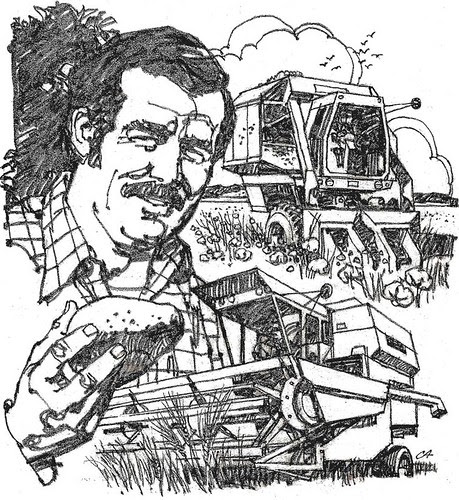 Some of those, which we'll see later on, were cleaned up and used as finished art.

* See these images at full size in Charlie Allen's Flickr set.
Posted by leifpeng at 6:24 AM 3 comments: 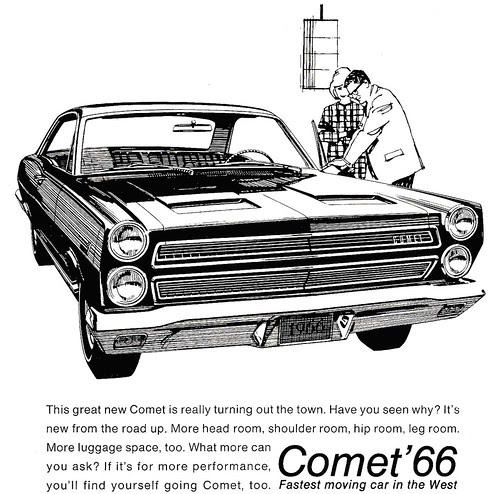 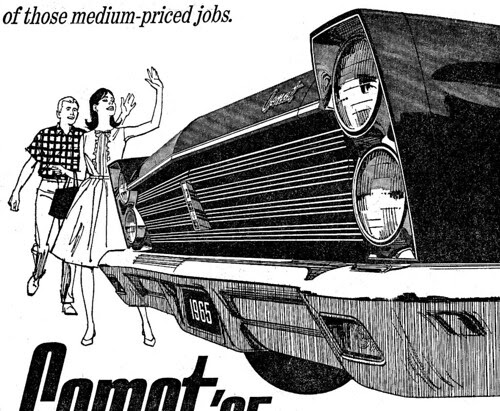 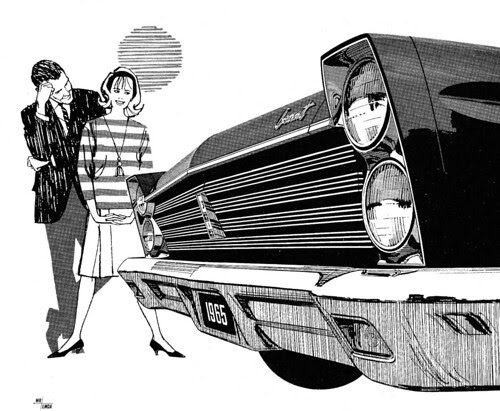 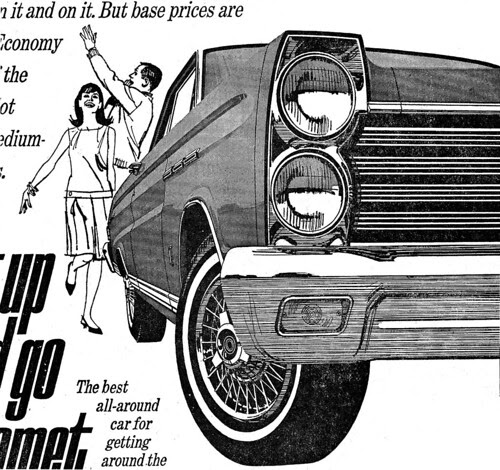 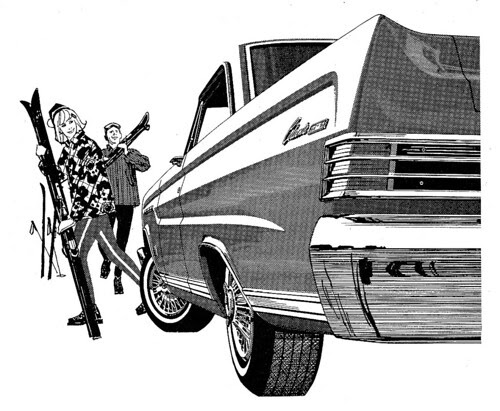 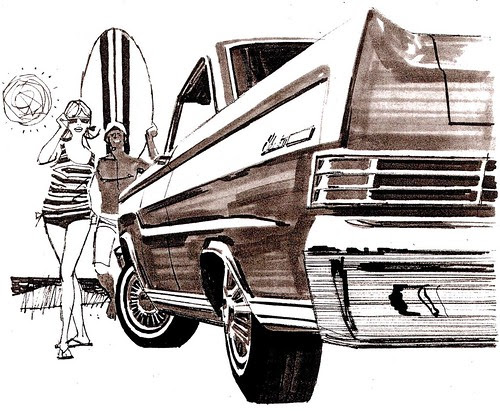 * Charlie Allen's Flickr set.
Posted by leifpeng at 4:47 AM 2 comments:

In keeping with the current stormy economic times and climate, the CAWS will post a 1955 Kaiser Aluminum ad depicting a B-47 in stormy night skies. 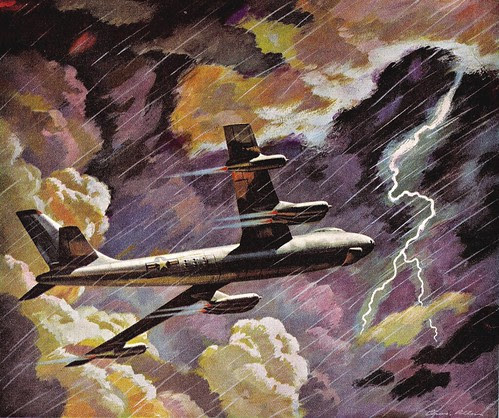 At the time, I wasn't that happy with the stormy sky illustration. Felt it was over-dramatized and not well designed. Now, for some reason and in hindsight, I like it better.

Also, in keeping with the times (and our beleaguered banks), a second Kaiser ad, circa 1956, showing a bank with flawless aluminum door frames. Hopefully, this bank's loan portfolio was as pristine and flawless as its' doors! 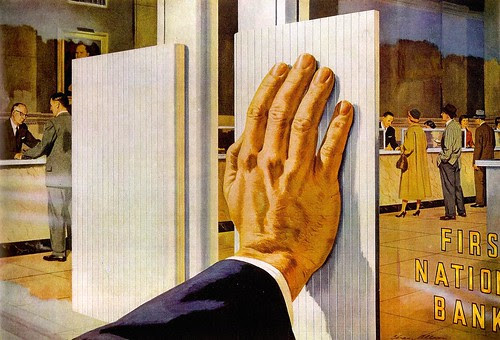 How do you show the outside and inside of a bank at the same time? The ever present illustrative problems. For what it's worth, Haines Hall (P&H) posed for the bank officer on the left and the customer on the right. I was the customer with the striped sport coat on the right. Wish I still had that sport-coat! 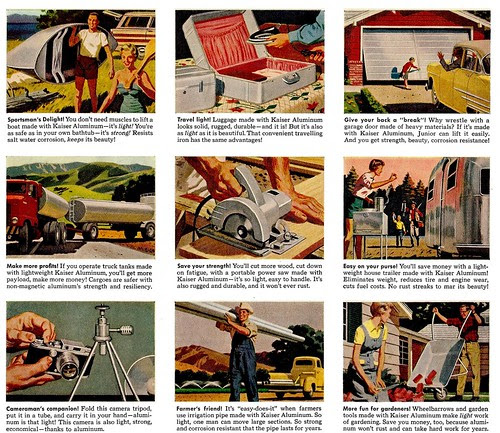 Both were difficult assignments for a young artist...and presented a real challenge. Both had additional 'spot' illustrations, and, of course....a deadline.

The small illustrations appeared on the right of a double page spread in the Saturday Evening Post, Time, etc. 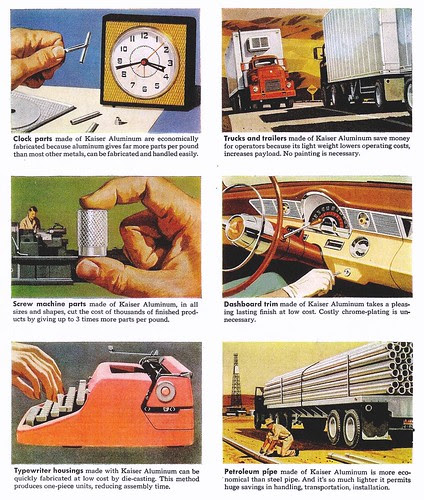 Another workout, but more fun to do!

* Be sure to check these small spots out at full size in Charlie Allen's Flickr set.
Posted by leifpeng at 7:33 AM 1 comment: 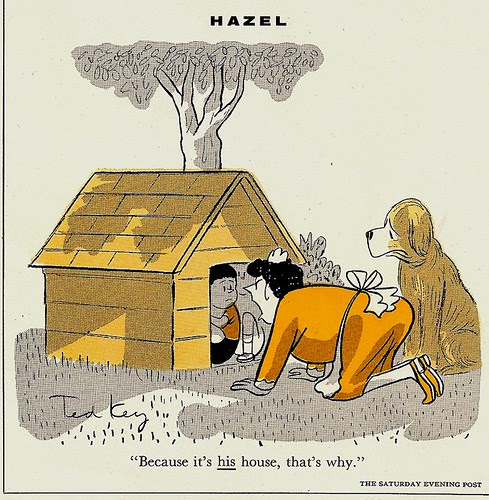 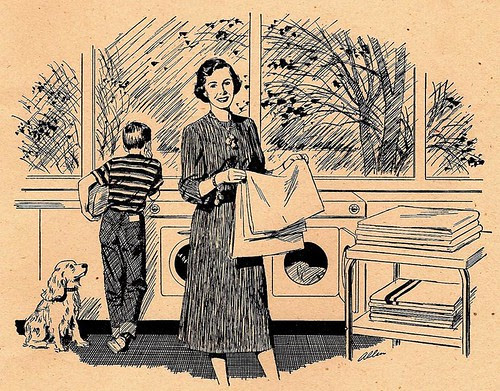 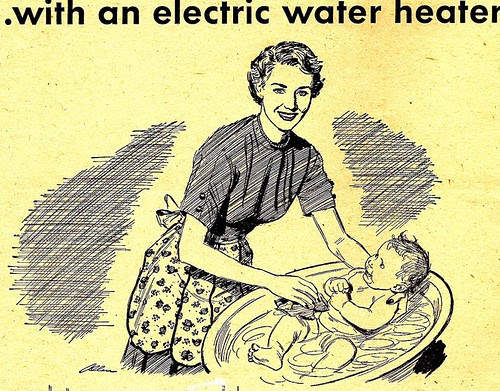 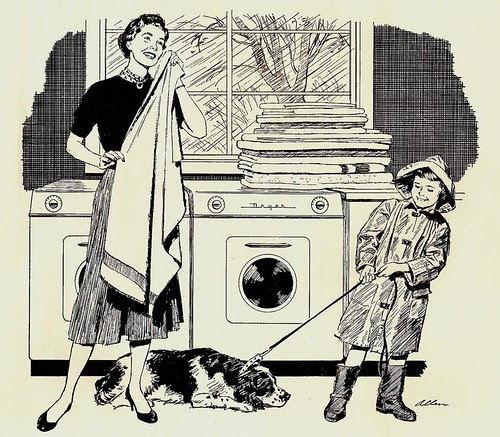 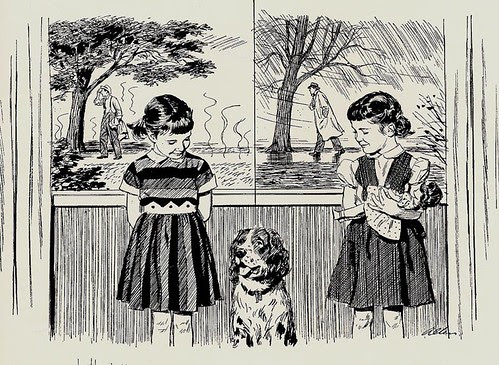 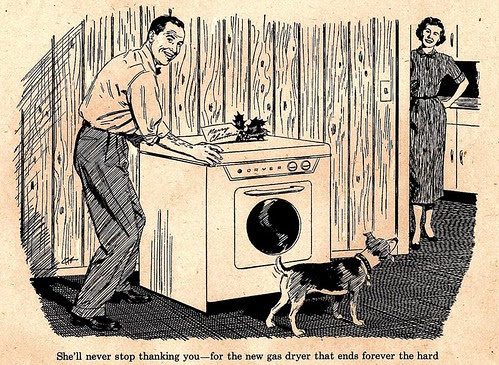 When I was considering...and test-driving on the dealer lot....a Honda 55cc motorcycle, she said, 'Mr. Allen doesn't need a motorcycle. What he needs is a ten-speed bike!' Her name was Helen......close enough!
Posted by leifpeng at 8:39 AM 1 comment: 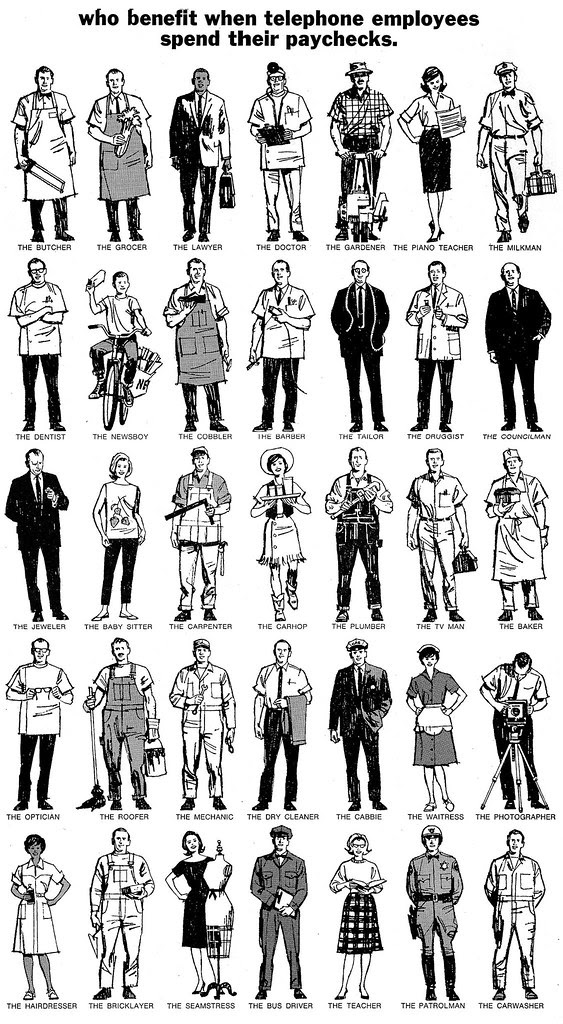 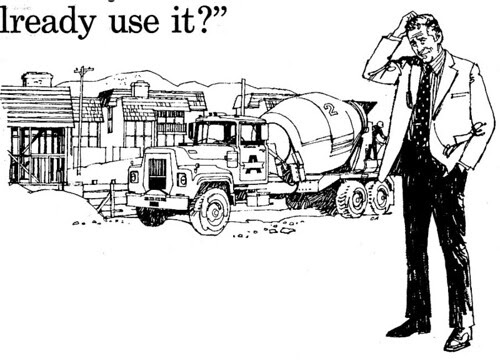 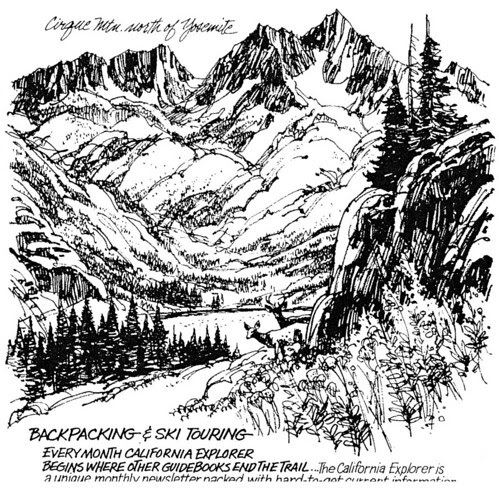 * Thanks for kind help from Tom Watson, who has a better recall of the 60's and 70's than I.... just a brief review of Hal Riney's career. He was an inventive AD at BBD&O when I did several jobs for him....and later became the agency's creative director. In the 1970's he started his own ad agency, and, adapting to the changing times and media, created a series of outstanding TV and radio commercials for major national clients. Some were General Motors Saturn division, Lipton Teas, the 'Morning in America' commercials for Ronald Reagan's re-election campaign, E & J Brandy, Bartles and Jaymes Wine Coolers, and many others. He often performed his own 'voice-overs' on commercials....with a quiet, folksy, nostalgic style that was in complete contrast to the hard sell voices usually heard in advertising. Riney died this year...but his amusing, kinder-gentler Americana themes and style will be missed greatly.
Posted by leifpeng at 9:32 AM 4 comments: