It's a workaday world...and, life is work! 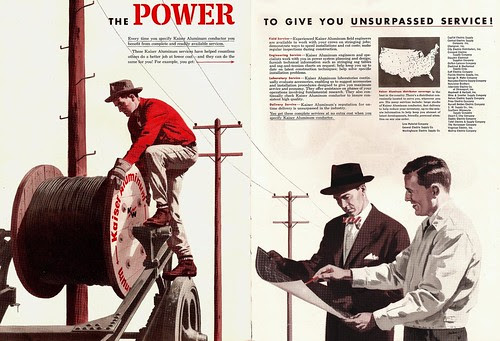 When I was a kid (a couple of hundred years ago!), boys grew up with pocket knives, cap pistols, even BB guns. Most commercial toys were made of cast metal or formed metal. Decades before plastic toys were the norm, we carved and created most of our play items. From pine box wood....we made airplanes, boats, race cars. Paper provided airplanes and boats. From bamboo....submarines, blow guns, and orange peel shooters! Forks of branches gave us sling shots....rubber inner tube strips tied on. At one young stage, and from our encyclopedia, a friend and I were fascinated by mummies, catacombs, and Egyptian tombs. We carved small figures, wrapped them in strips of cotton, then burned them at the stake. I know....warped from the start!

Back to pocket knives, one of my two original knives is shown in this Kaiser Refractories duo-tone ad, opening an industrial bag. 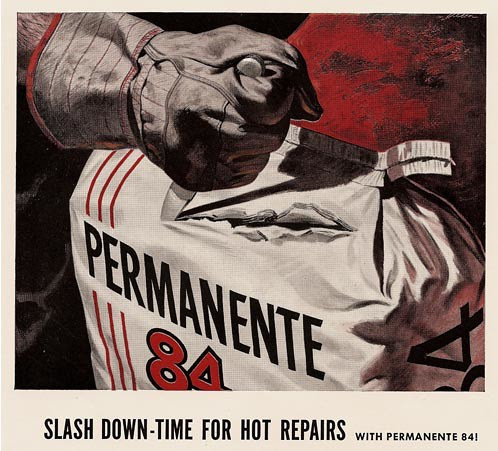 Mat knives were around in the 50's, but box cutters had not come into common use. I still have the pocket knife, and a similar pair of work gloves. 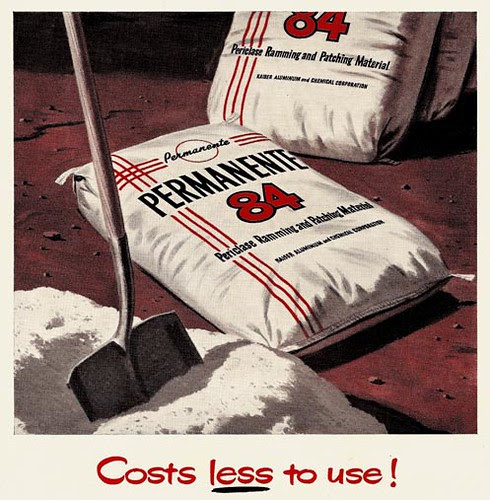 Western industry and agricultural corporations, though smaller in numbers than in the mid-west and east coast, still provided a lot of ads and illustration subjects back in the 50's and 60's. This week's CAWS will post a few assignments from Kaiser Corporation and US Steel. 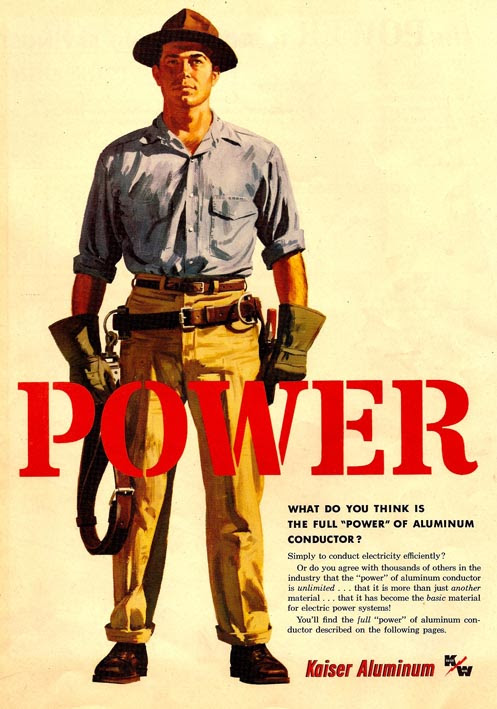 Kaiser had multiple divisions....Kaiser Aluminum, Kaiser Steel, Kaiser Refractories, Kaiser Automotive, which produced cars for several years, and, of course, one of the first and most successful HMO's in the country. 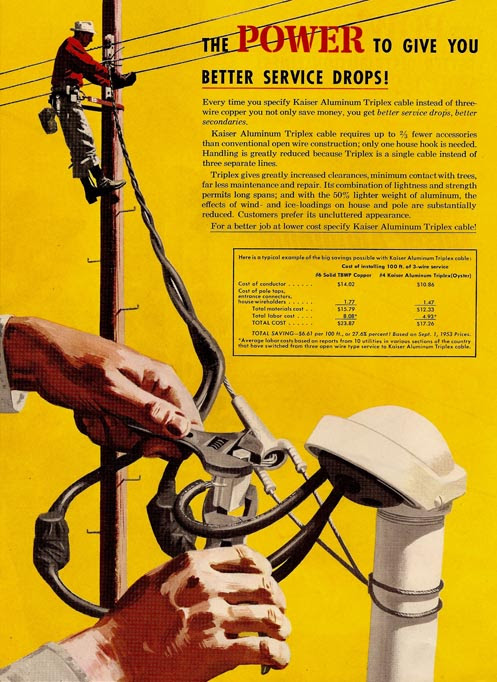 Above are two scans from an early Kaiser Aluminum wire cable brochure. Below, three US Steel B&W spots....all working subjects... 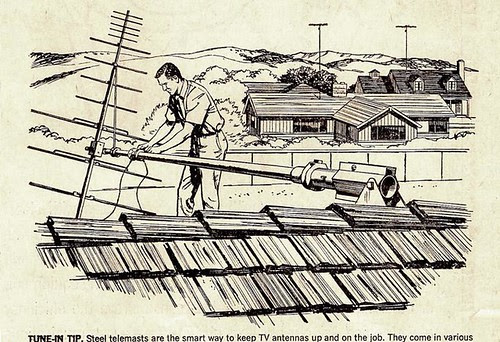 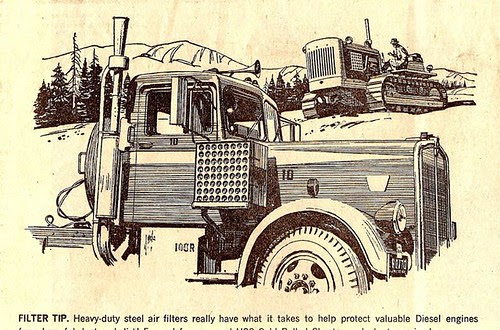 ...one including our 'lady of steel'! 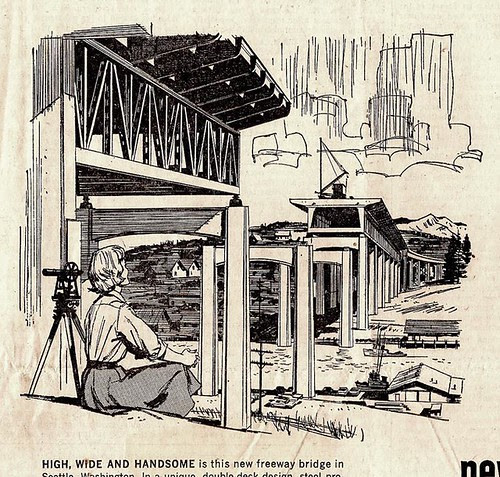 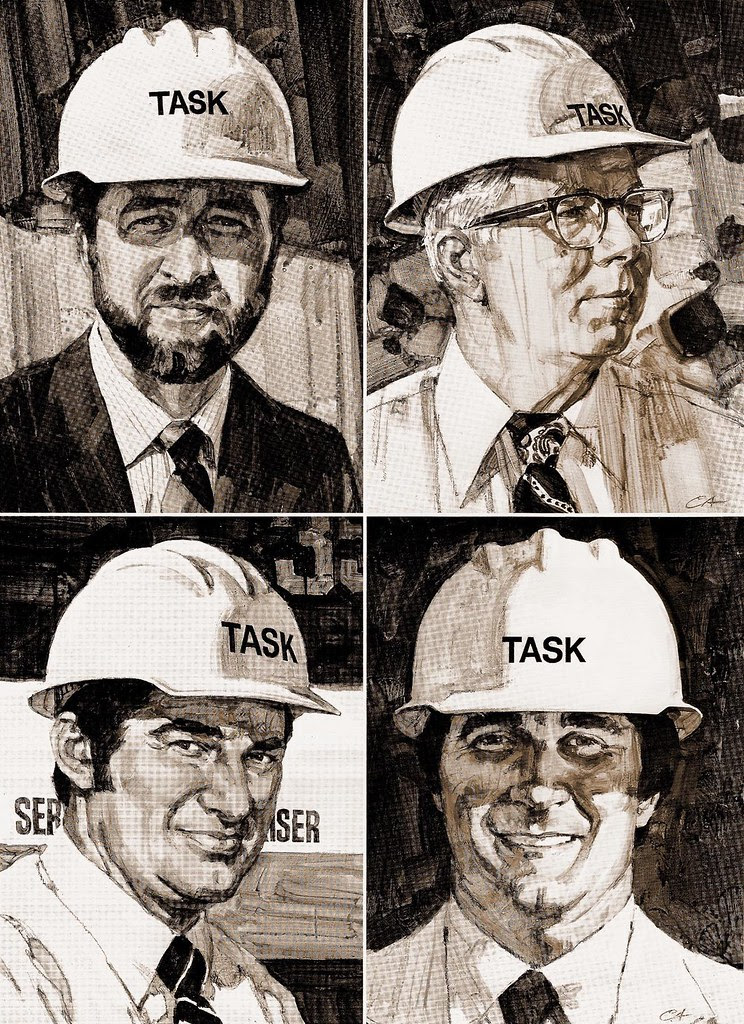 * See these (and many more) images at full size in Charlie Allen's Flickr set.
Posted by leifpeng at 2:12 PM

Perfect perfection almost, as always, Charlie, and again...the compositions and those hands...

You wrote you were a kid "a couple of hundred years ago":

Hi Mr. Methusalem!
Already in those times you must have been a very creative boy. Did anything survive from those times? Anything made out of paper, pine box wood, bamboo? Any self-carved mummies?

A child's imagination! A piece of wood suffices and serves to make anything out of it, variation upon variation.
Your descriptions stirred memories of my own childhood. Had a rudimentary set of Lego stones, but would assemble them in a thousand ways, sometimes erecting the queerest buildings, sometimes constructing something resembling a house.
Perhaps like the 24 letters of our alphabet. Anything ever written just consists of those few characters, doesn't it?

And nowadays?
What about the illimitable child's imagination, if today's Lego-sets come with instruction manuals, if today's children get all that pre-chewed, elaborate, sophisticated stuff the marketing departments invented? Of course sales will increase, but what imagination is left in all that? That child's imagination you so vividly describe from your memories 2000 years ago?