'DRIVE YOUR CHEVROLET THROUGH THE U.S.A.
AMERICA IS THE GREATEST LAND OF ALL....'

Yep....the Chevy jingle again...with good reason. It was very much a part of the 1950's radio and TV advertising culture, along with the newspaper and magazine 'Chevy blitz' to which so many illustrators contributed. This week more Chevy newspaper B&W's....then we'll finish the Chevy illustrations next week with a mix of billboard and magazine ads. 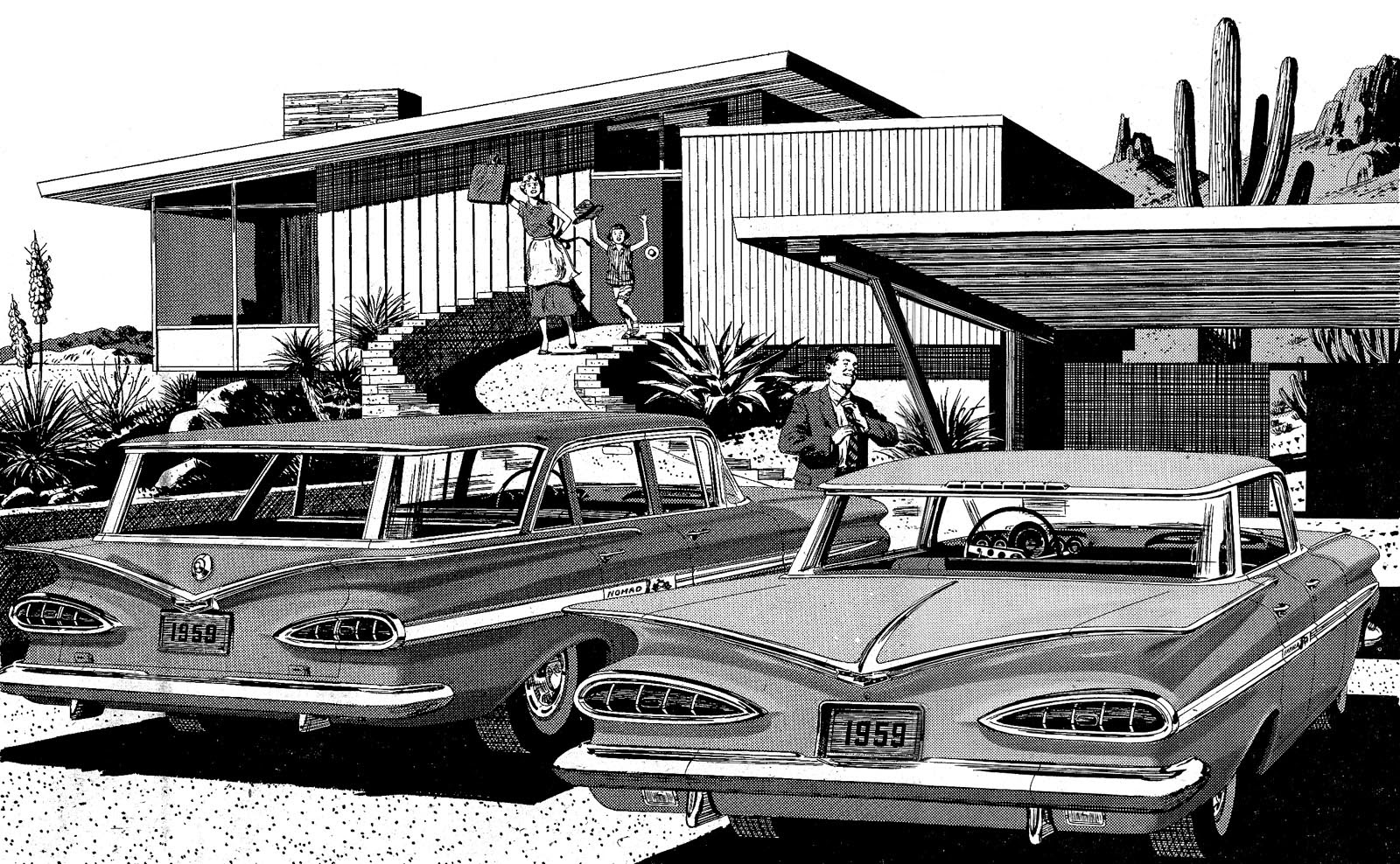 Once again, Leif is 'elected' to patch together partial scans from full page clips and newsprint proofs. It seems to be the only way to come up with decent scans on these B&W line ads. (Click on each image to see a MUCH larger version.)

First (above)....a 'could be' Arizona location and family scene....conjured up from imagination, and from our very different northern California environment....grassy hills, bays, oaks, redwoods, eucalyptus, etc. I was aware in those days that the tight rendering on the cars tended to add the same style to the rest of the illustration. Pretty hard to 'loosen up' on Chevrolet ads! I finally did....on the yellow Corvair magazine illustration seen earlier, and maybe again later on.

Following, another steep hill concept, so favored by Jim Hastings and staff at Campbell Ewald. This is a fictitious bay scene....whose bay? Not sure....somewhere in the 'wild west'! Again....it's advertising! 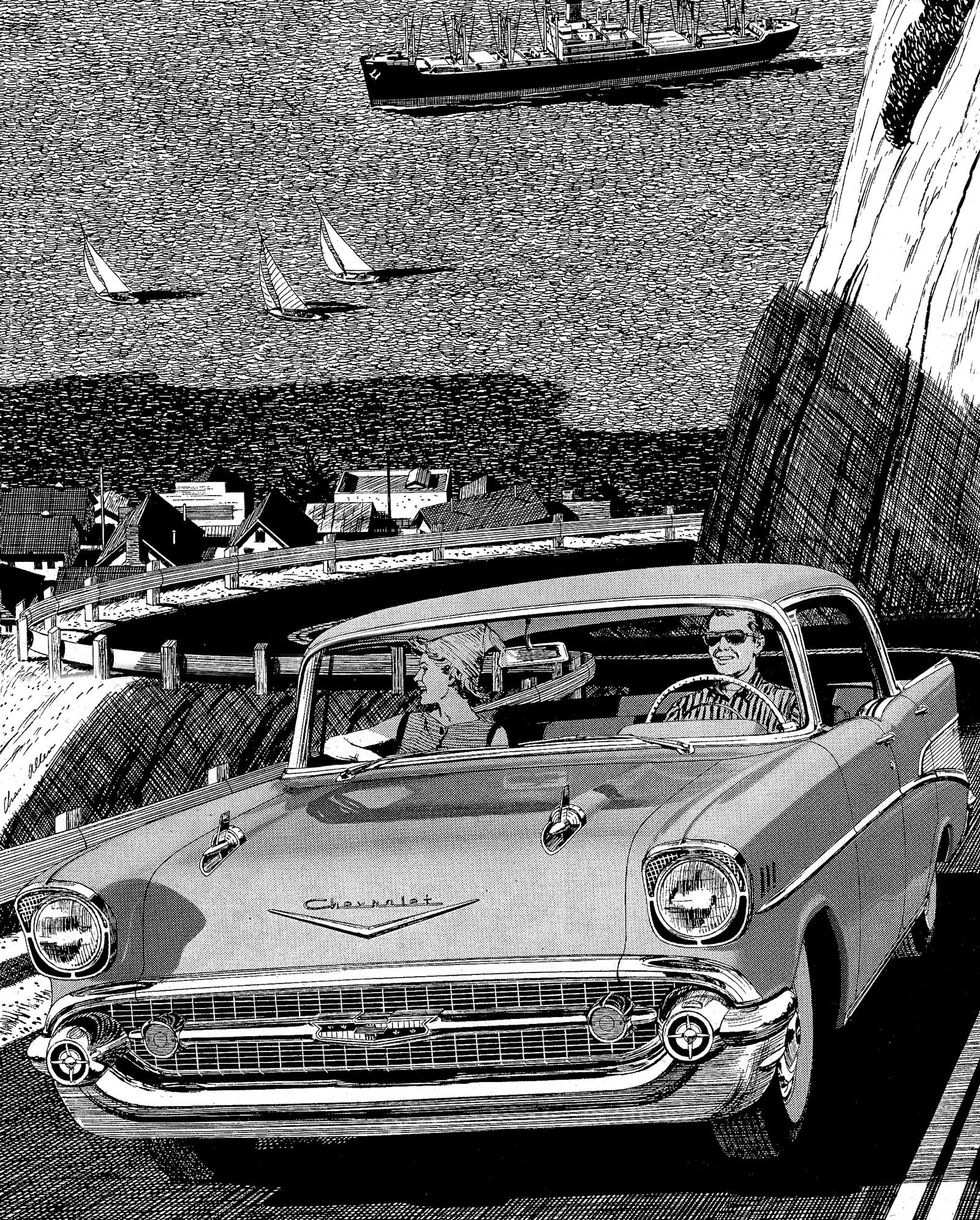 Then a mountain road location with a cable and gondola overhead. Sharp eyes will notice how I 'cleverly' sneaked my TR-3 sports car into a Chevy ad....in the scenic pull out in the background. 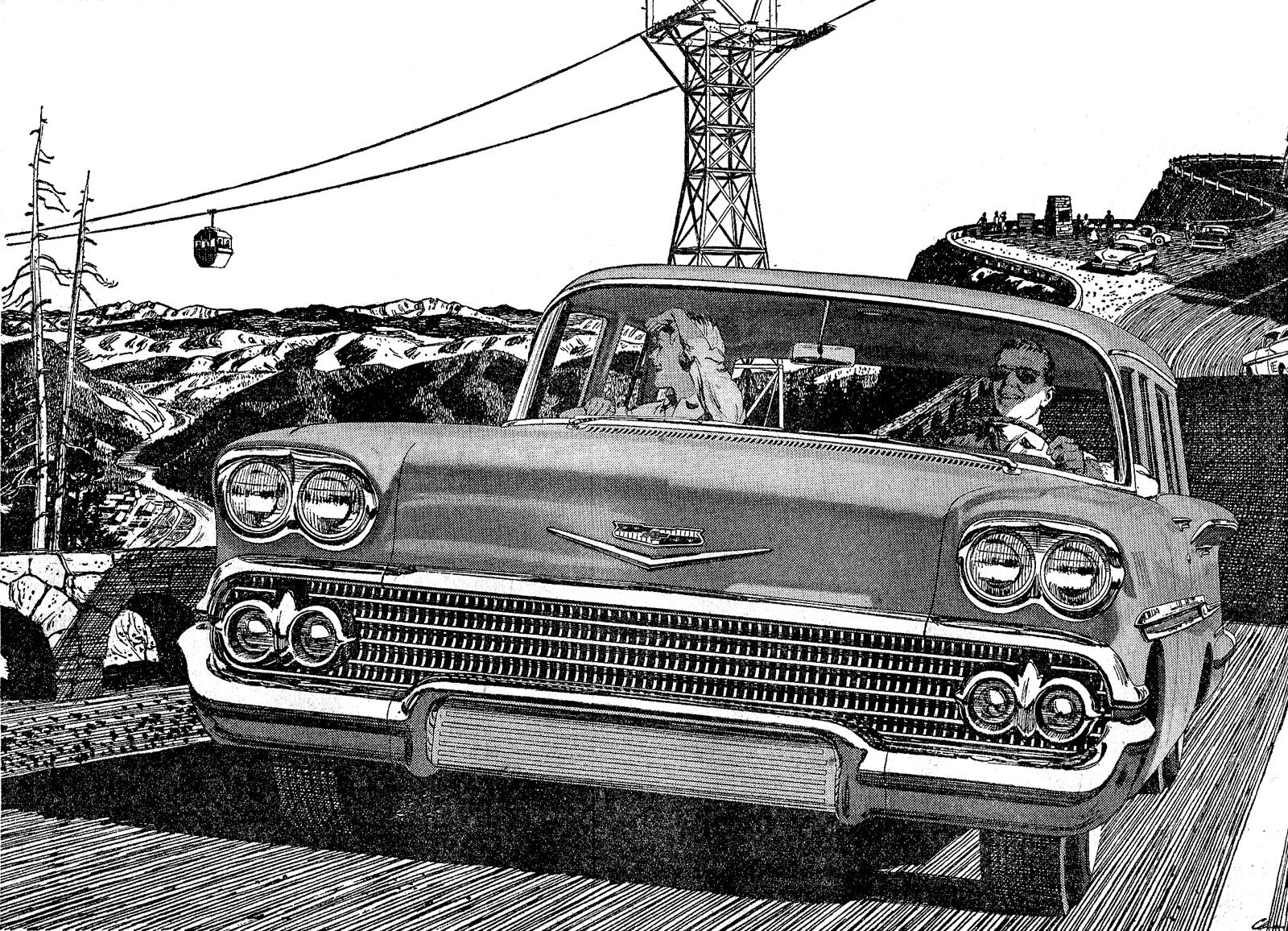 The 'Jack Robinson' illustration should be next....and I seem to recall the agency and Chevy liked this ad. 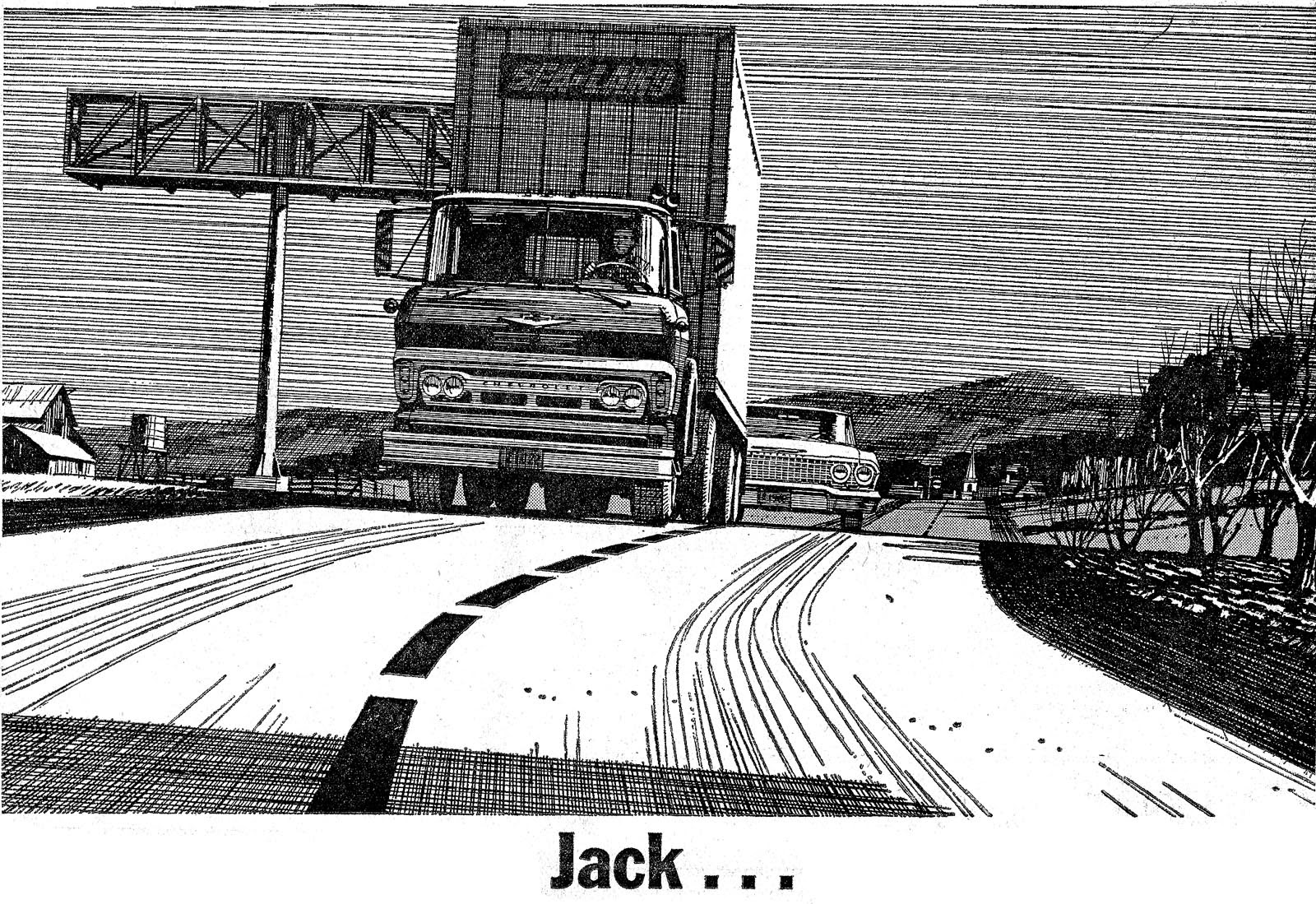 Next, a must inclusion of a glider scene. A tough assignment, as I remember, getting car, glider, background and all, in the picture. I had in mind a quiet glider-friendly airport, maybe in the Tehachapi Pass area of the Sierras. Not so sure I would want to be in the glider....an early release at a low altitude could ruin your whole day! 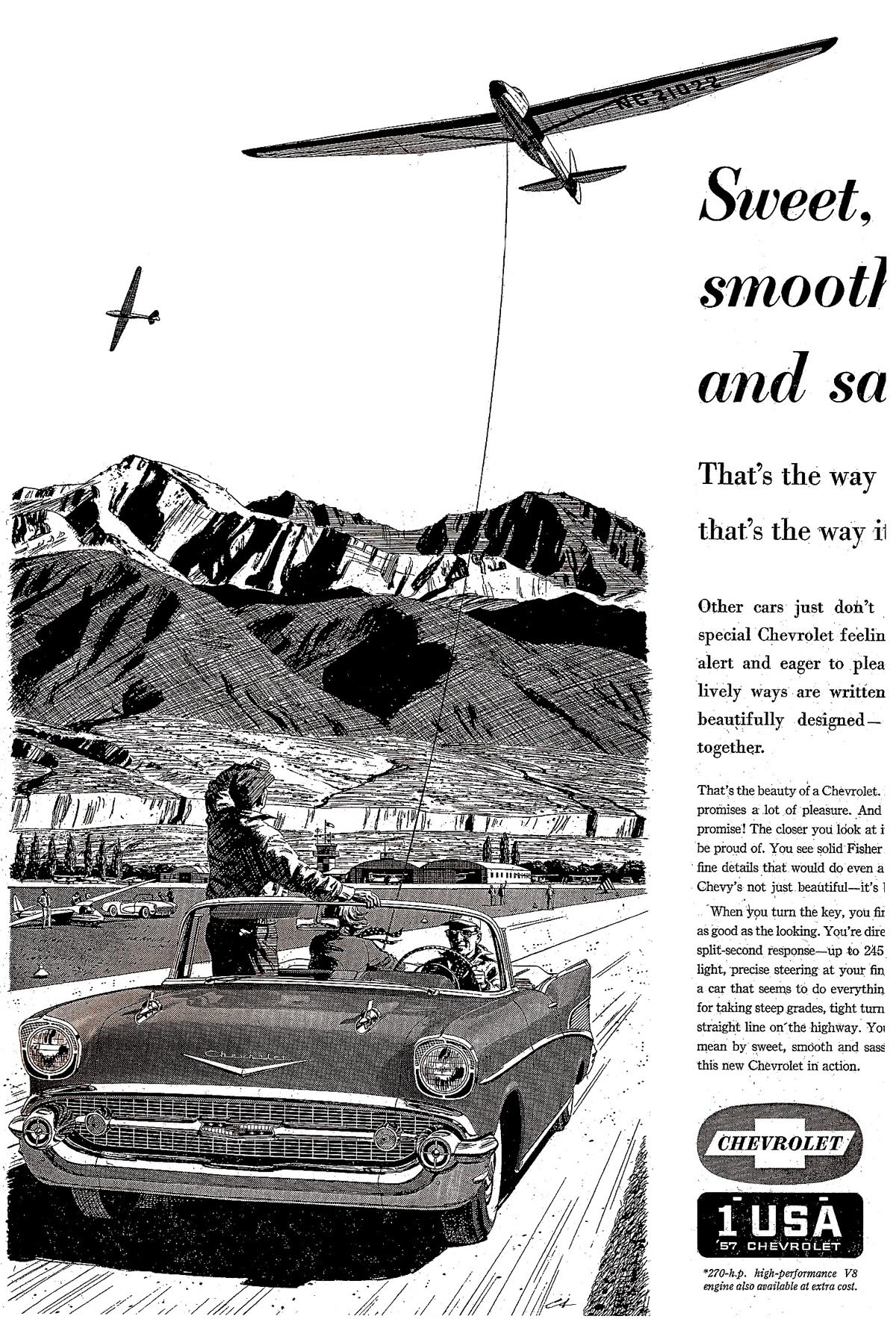 Finally, one more oldtimer that hadn't worked earlier. Comment....not much, except I can't remember where I took the shot looking up the tailpipe of a military jet....but probably at Alameda Naval Air Station. 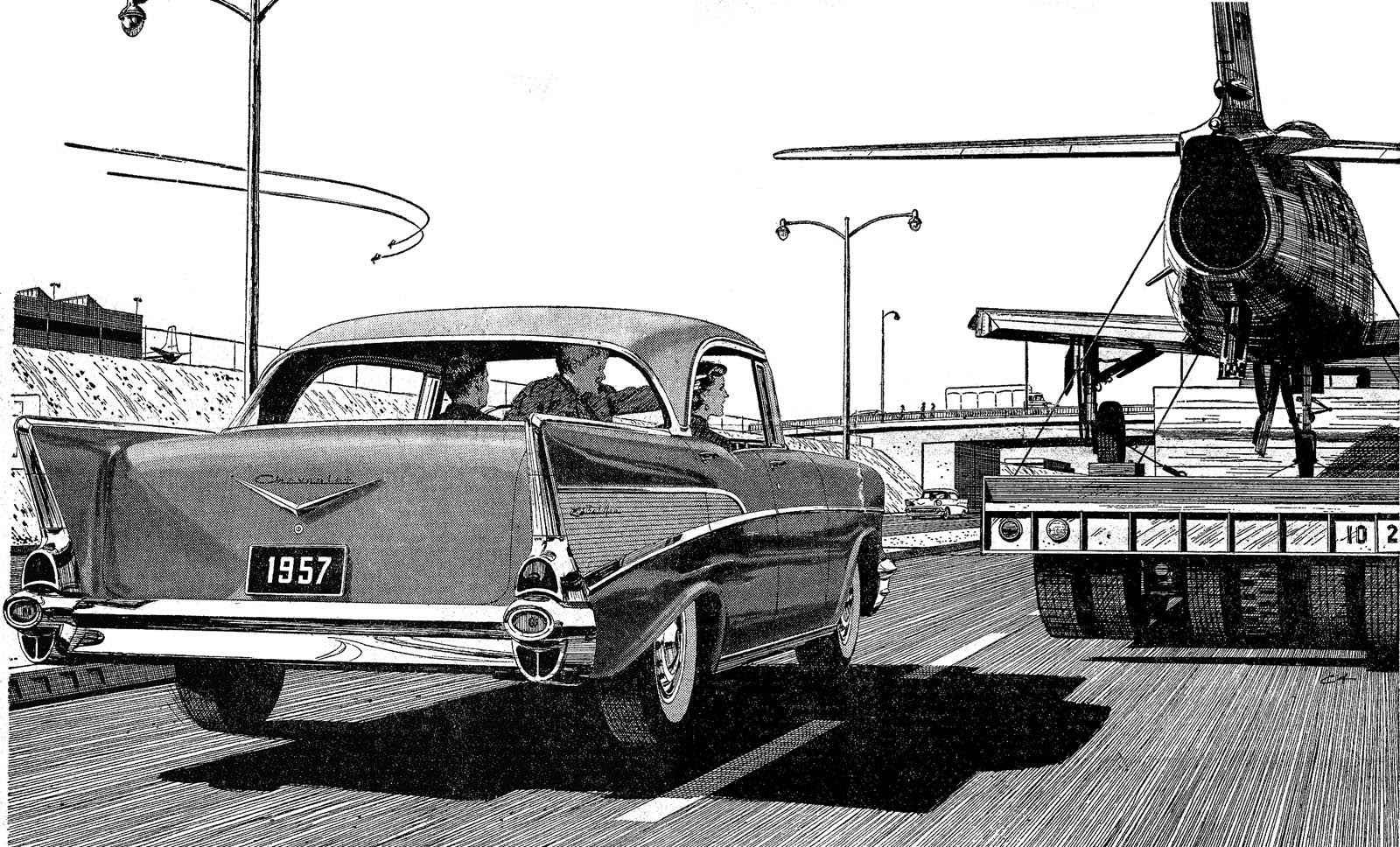 Here's the bridge....sing out now!

'ON A HIGHWAY OR A ROAD ALONG A LEVEE
PERFORMANCE IS SWEETER, NOTHING CAN BEAT HER
LIFE IS COMPLETER IN A CHEVY....
SO MAKE A DATE TODAY TO SEE THE U.S.A.
AND SEE IT IN YOUR CHEVROLET!'

* Charlie Allen's Flickr set.
Posted by leifpeng at 8:16 AM

LEIF.....I don't mind going first! It may seem 'pushy' but if viewers could see the yellowed, folded, tired, sometimes torn and stained newsprint clips from which these images are scanned, they would understand. Leif received partial scans, poor scans, dirty, off color backgrounds...all kinds of curve balls. Then he produced these stitched-together, clean images, and a handsome blog. Just can't say enough thanks, Leif, for once again salvaging the old days of black and white newspaper illustration.

Hello Charlie Allen. I have become a fan of yours since I found your site.

I am very impressed with your visual story telling ability. The way you design your compositions are brilliant. I have a warm place in my heart for your Black and White work.

I do have a question. I'm starting a video blog where I discuss the underlining design choices a very well trained artist / illustrator makes when composing their artwork.

My first video - I used one of your Chevy illustrates for my demo. Would you be willing to view my video and grant me your permission to use a few of your illustrations in a few more videos. As you will see I promote your blog in exchange for your permission. If you are ok with this ... I would love to interview you via phone. If you like the videos and grant me the permission to use some of your illustration .... you could post them on your blog. I'm sure your audience would enjoy them also.

Thank you for your consideration. If you don't grant me permission... please let me know so I can remove the video. Thanks - I wish you well.