A 'sedimental' old ballad composed by Carmen Lombardo and played by brother, Guy Lombardo, the well known hotel band leader and orchestra back in the 30's, 40's and 50's. He was famous for slow dance music and fast racing boats. Also for ushering in the New Year each year from a posh NYC hotel, back when dance orchestras were broadcast nationally over network radio. Ah yes....gentler times. And....times to match some very early B&W ads, 1950 or '51. The CAWS is all about old, of course....but there is old and older. Trying to clear the decks, anyway, of most of these....historical or hysterical....viewers choice.

First, four B&W PG&E ads from the consumer series in the early 50's. These were to promote the low power rates in Northern California....now, some of the highest rates in the nation! Monterey Bay, the location of the first illustration. Fishing boats often carried female names on the bow....I used my wife's name on the foreground boat 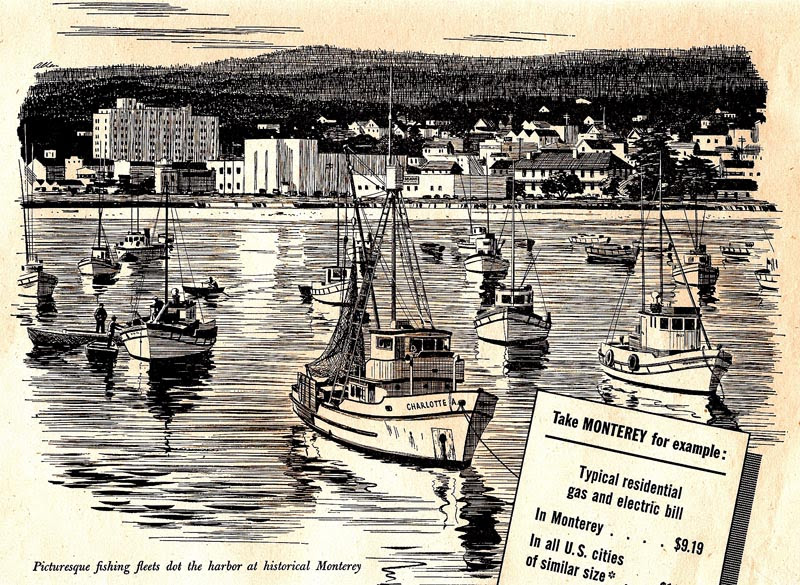 Then, central valley cotton fields and hills the scene on the next... 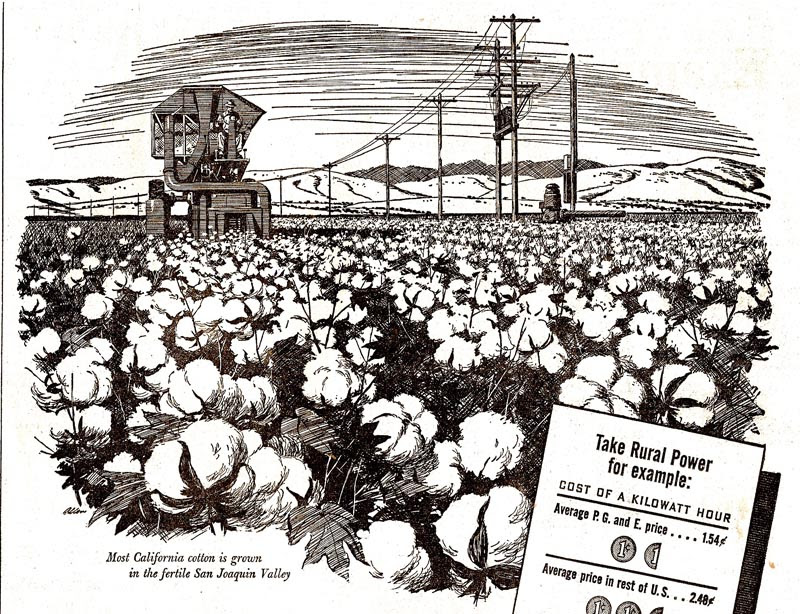 ...followed by San Jose with the palm trees. 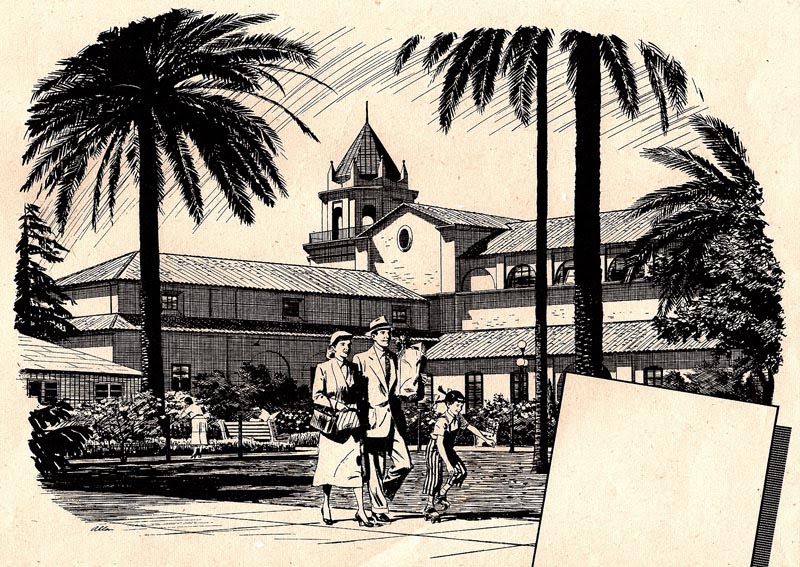 A new Richmond city hall building follows. The interior scene, both pen and brush and ink, presented a challenge, as I recall. 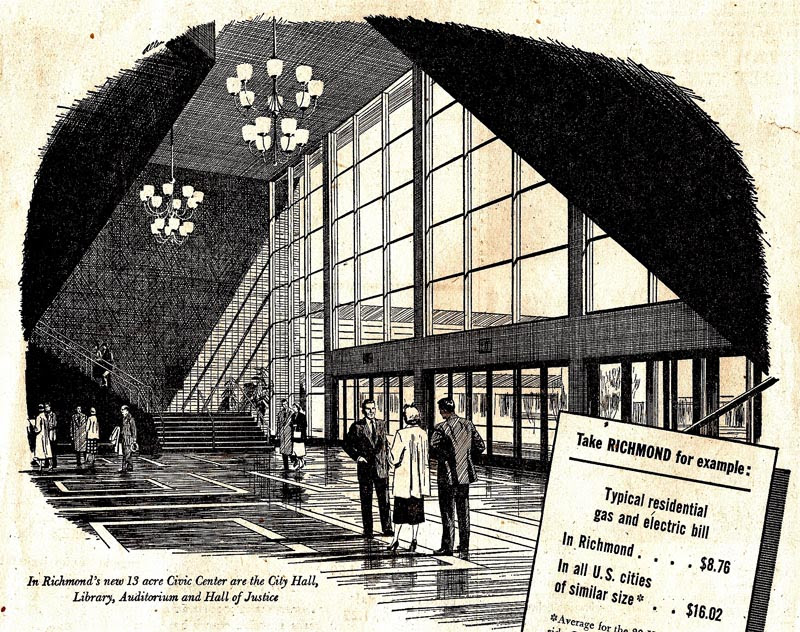 A B&W Chevron service station illustration follows....back when credit card use was just beginning....this one showing a new imprinter. As I remember, this was my third 'important' Chevron assignment from BBD&O....very tight and very dated. 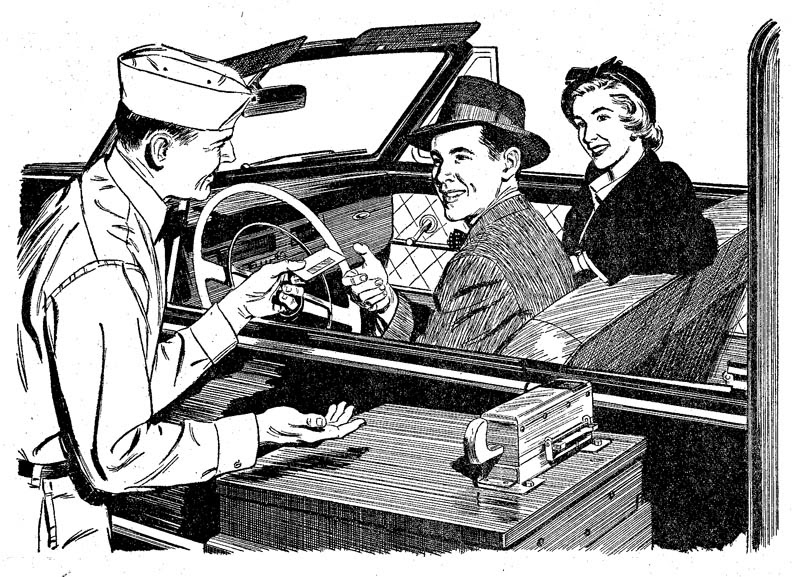 Two smaller B&W spots next, a professor lectured by a student and Chevron attendant.

A Marathon Oil ad after that, minus the halftone background that went with the film pos. This came from an eastern ad agency. 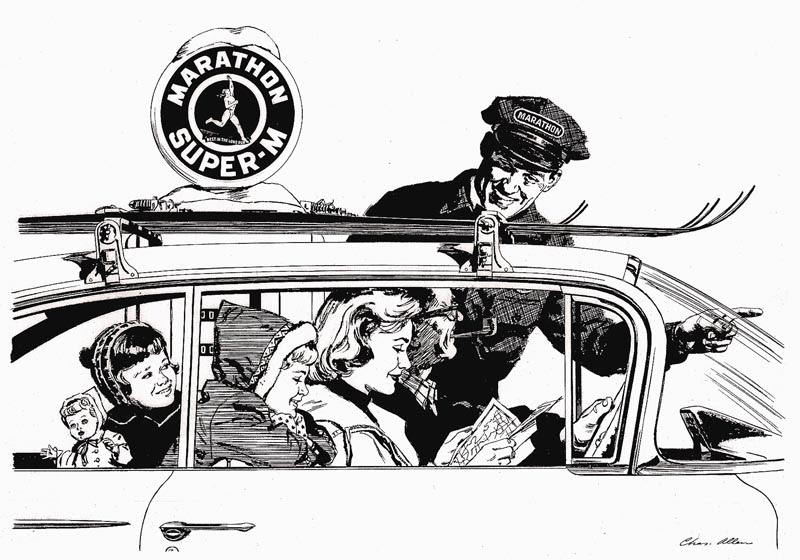 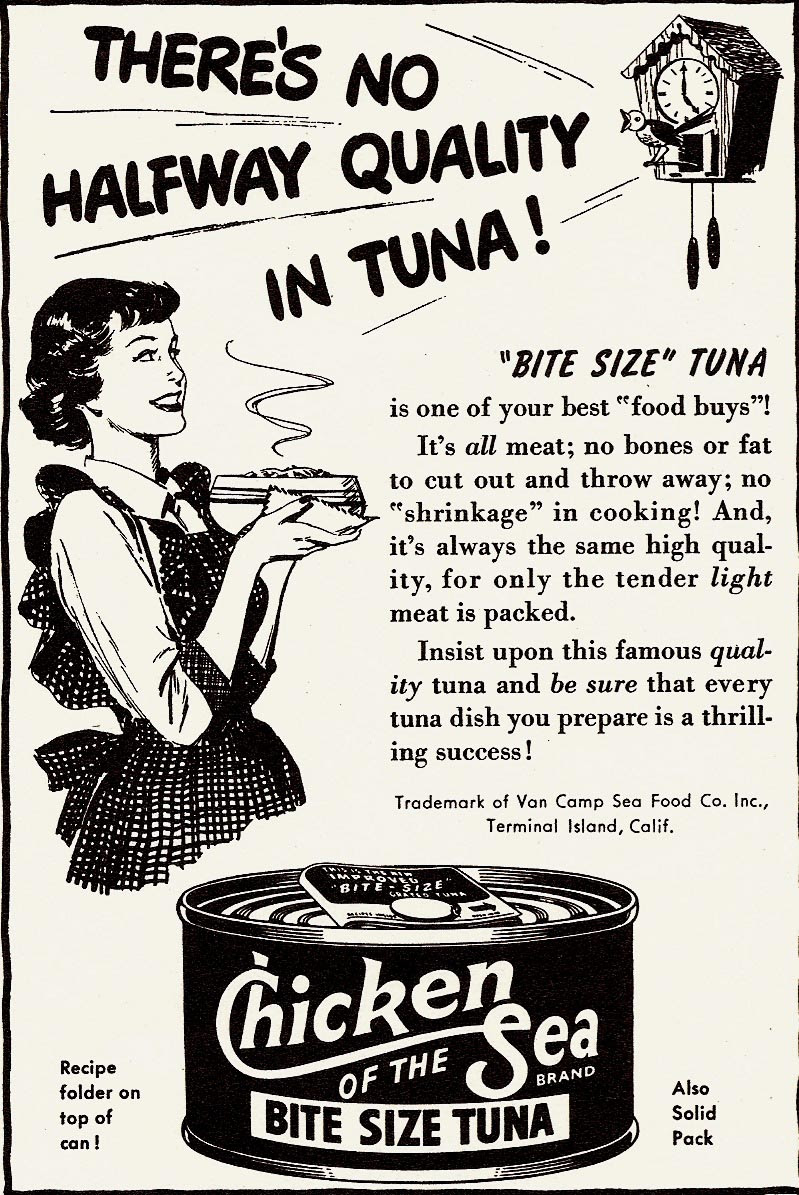 Two of them lamenting the sad plight of the young hostess not choosing the 'right' tuna! Tres tragique! 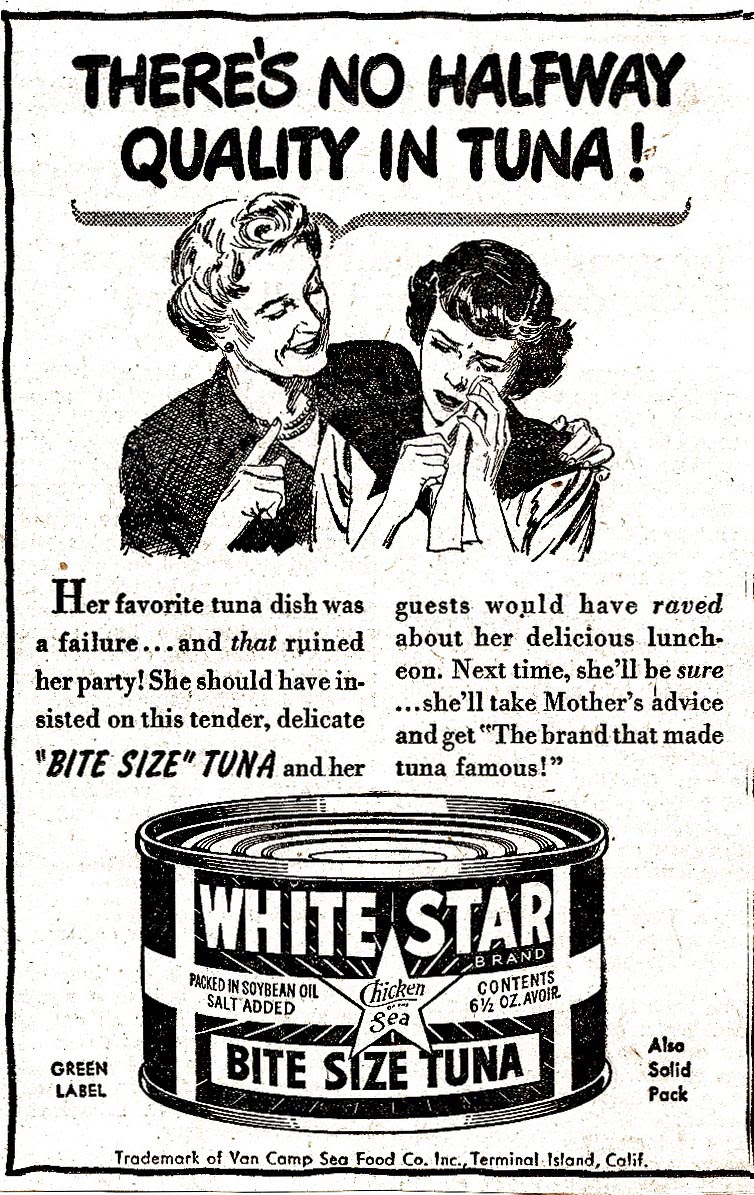 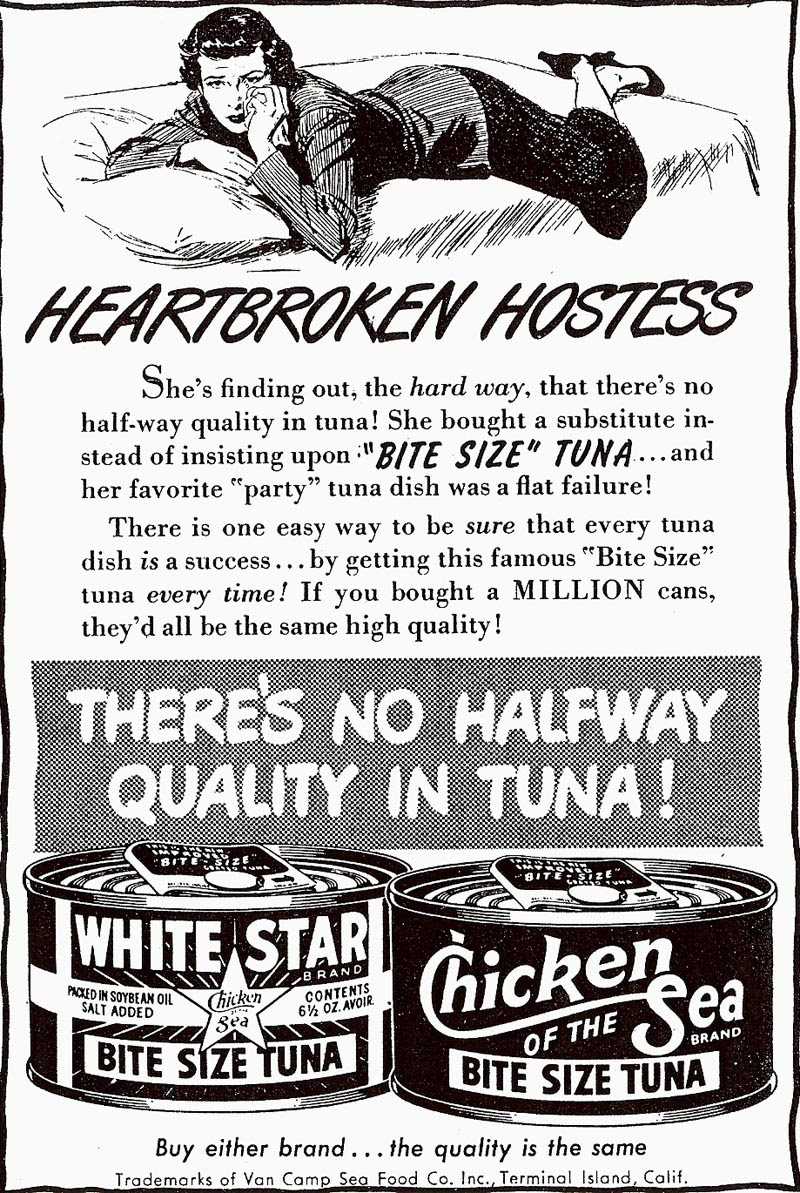 And very last....two scans revisiting our intrepid 'Lady of Steel' once again. 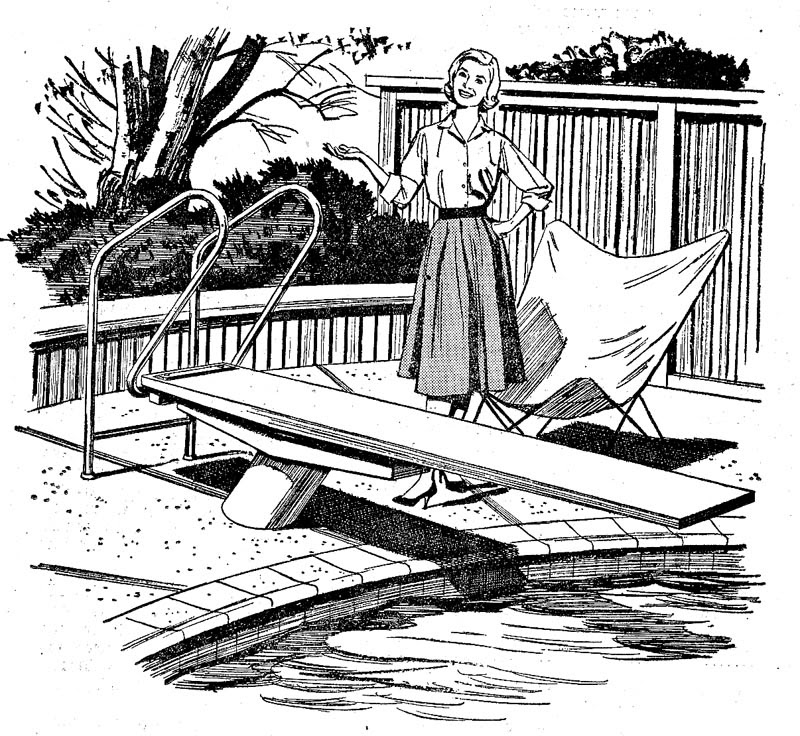 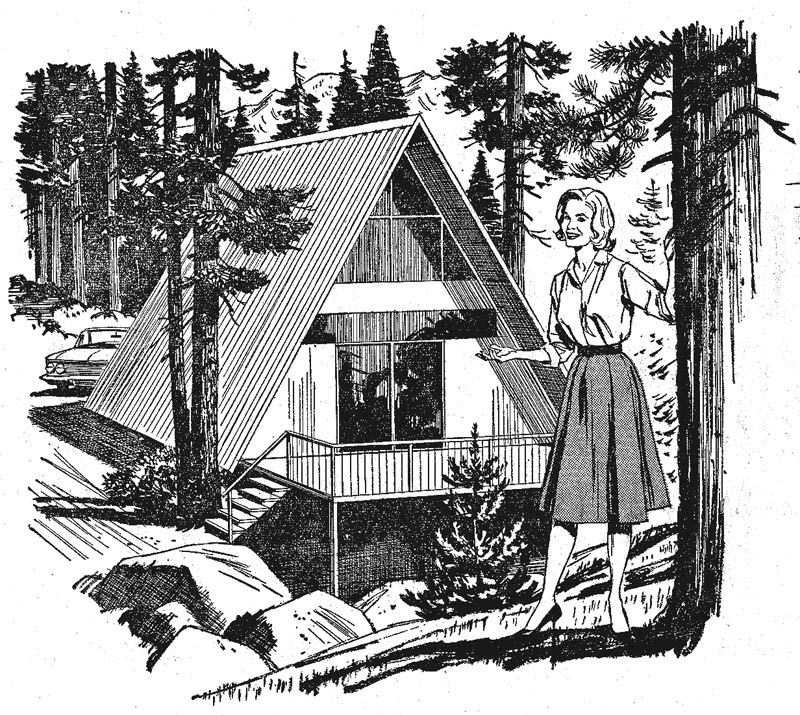 * Charlie Allen's Flickr set.
Posted by leifpeng at 11:17 AM

hi charlie, its me again … joe, the anonymous-kid.
such a brilliant lineart! i´m speechless!
please, for a better understanding, could you give
me (us) an explanation how did you done the drawing-process?

for example "central valley cotton fields" …
did you worked here with a picturereference?
and if so, how did you treat it … take you ole camera and drive with the destination mississipp´,
just for an simple job like this?
how many time – average – did you need for an
artwork like this one?

maybe my question sounds a little bit stupid for you, but i´m just a kid of my time … grown up surrounded by digitalgadgets.

JOE....Sorry about the digital gadgets! Deep condolences from here. The cotton field B&W was made up....but fortunately my wife had dried cotton branches, bolls, leaves for the close up. She uses it in flower arrangements, wreaths, etc. I recall getting reference on the cotton picker....and the well pump and telephone pole wires, etc....from farm journals or mags. On the others, had reference on buildings, boats, a shot of Monterey from a pier, that I took....some provided by BBDO....etc. Collecting reference for a job often took hours or a day or more....but necessary. The figures, I always had to come up with....and that took time....and the composition of the picture was mine. So....I guess that's why it's called a job! Last, I believe those PG&E jobs had a one week deadline...not much more. Hope that helps.

I think I recognize your girls in the back seat of the Marathon ad.
I don't know what I enjoy more, the illustrations, or you commentary. Keep it up Charlie.
Bruce

BRUCE......You're right on the Marathon B&W....my two youngest. And I think you remember Chris Kenyon who posed for the Marthon attendant. Jack Painter was probably the driver/dad. Thanks for the comment on the blog comments....workin' at it.

beautiful stuff Charlie. I love the linework and all the different hatching techniques, the drawing under it all is so perfect too. What kind of nibs were you using to ink these?

What a wonderful hand, eye, and imagination you have! So glad to get to see your work. I hope you will continue to post these...i look forward to seeing more!

DYLON....Not sure the pen points are available today....just havent checked. Likewise wooden pen holders. My favorite two pen points were a Hunt # 303, and I think a Hunt Spencerian, which was common and easily available. Also called a bankers pen. A strong point with a small nib on the end. VANNA.....Sorry I gave a bad address.....but you found it....thanks. If you scroll back....and check the Flickr set, there is a lot of ancient stuff!

Perhaps not THAT trivia, your note, Charlie:

May be in the near future, me pedestrian will be coerced to wear a safety helmet...

I can almost taste the joy in these pictures. Your positive inspiration is much needed in these interesting times.

What great stuff! Your line illustration is so superior to most of the ad work I've seen in 40s and 50s magazines.