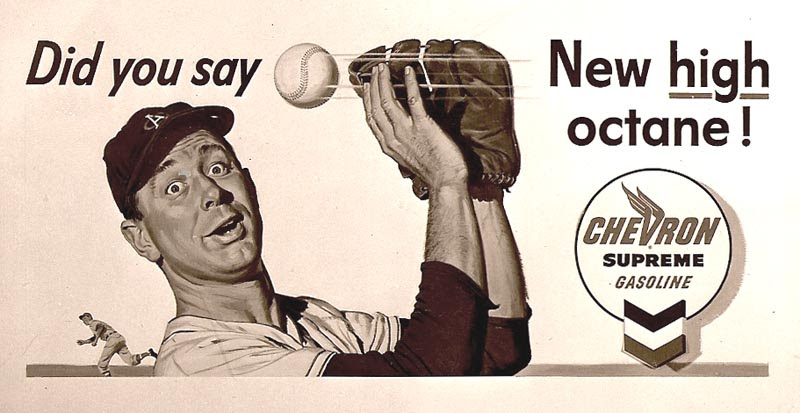 * Charlie Allen's Flickr set.
Posted by leifpeng at 6:57 AM

these are really great - really takes you back in time. it's amazing how the styles [of esp commercial work] really influences the perception of different eras - thus, the "tight" aesthetic really makes the 50s seem clean/sterile... but I suppose in many ways it was.

nice work, once again!
thanks for sharing!

Ahh Charlie, beautiful. Check out this link (I hope it works) to see a close up in color, and a look into the detail, brush strokes, and Charlie's wonderful ability to turn a plane.
http://phcreative.com/realretrosource/gallery/27.jpg

@bruce:
the link that you given us, don´t run.
could you try it again please? thank you!

thanks for sharing + nice greets,

I'll add a late comment to this....and it's something I forget to mention often enough on the blog. That is the skills and talents of the artists at P&H and other agencies and clients who were involved.. On the billboards seen here, all of the headlines on those ads were hand designed and lettered by mostly one guy....Jim Hasse. I would give him a tracing early on, and he'd work out his part. After I finished the illustration, he'd letter the headline, strip in a logo, whatever. A real team effort. I was very fortunate to work with him and the many other contributing artists in the business.

Some may feel squeamish about eating it, but rabbit has a fan base that grows as cooks discover how easy they are to raise — and how good the meat tastes.

Hello! This post couldn’t be written any better! Reading this post reminds me of my previous room mate! He always kept chatting about this. I will forward this page to him. Fairly certain he will have a good read. Thank you for sharing!
_________________________
Plakatanschlag