"Whenever you're watching a hula girl dance..."

"Whenever you're watching a hula girl dance...
Be careful, you're tempting romance...
Don't keep your eyes on her hips
Her naughty hula hips...
Keep your eyes on the hands!"

Two things I share with the 'Singing Detective', from the British PBS TV series, years ago. An obscure auto-immune skin disorder, mostly controlled these days with Prednisone. And....a tendency to associate pop songs from our era with subjects or events of today. So....the above Hawaiian tune!

A travel and Hawaiian theme on this week's CAWS. First, the 'Chevron Island' hula dancer. In color, an aviation magazine ad... 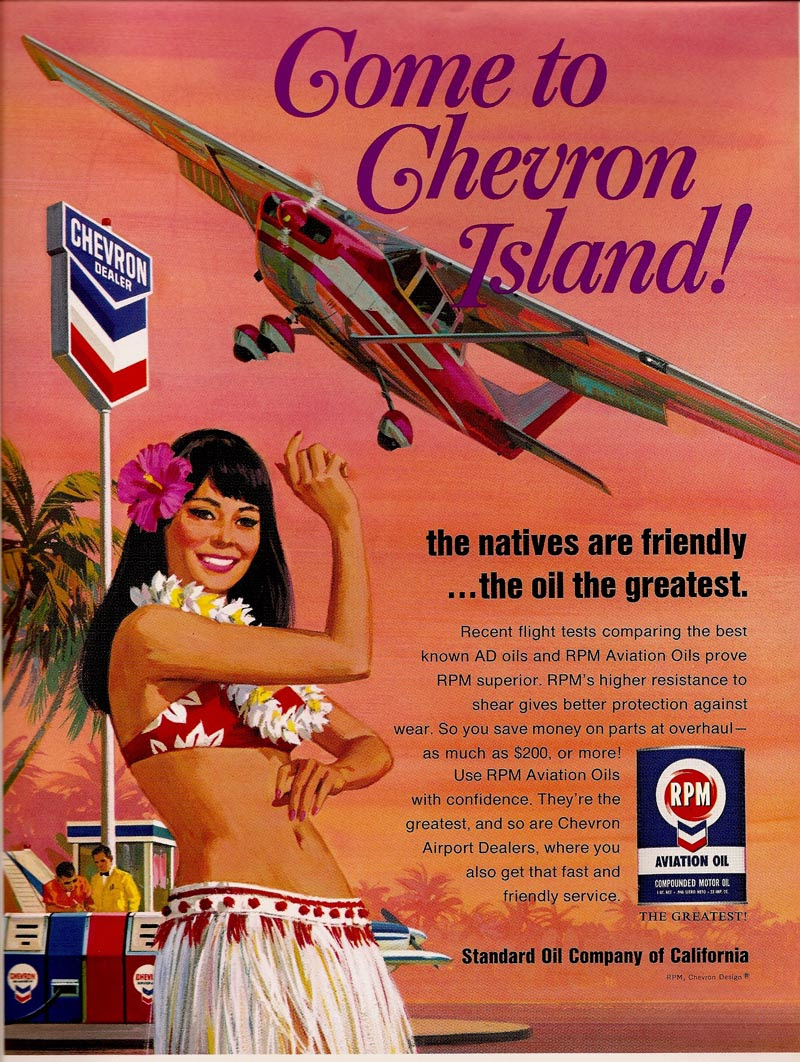 ...and in B&W (from color), a Chevron ad minus the copy above and on the left. 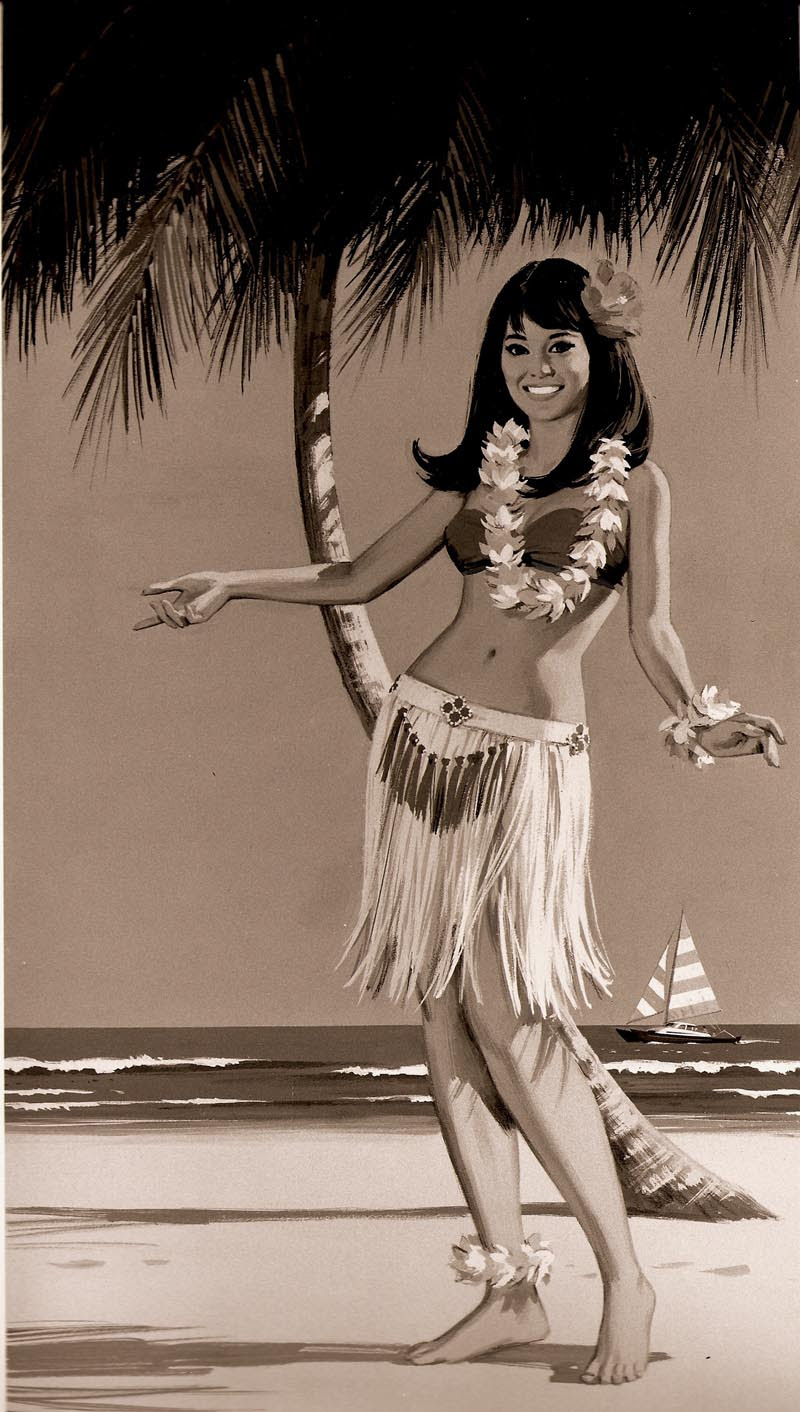 Both the Cessna Co. and the FAA might have had fits seeing that unacceptably low turn on final approach! But, hey....it's a fantasy world! Hula girls and gas pumps aren't normally found on runway thresholds!

Next, three Matson travel ads...around 1958. Matson was still promoting passenger ship tours to Hawaii on the 'Monterey' and the 'Lurline', both ships back from WWII service. 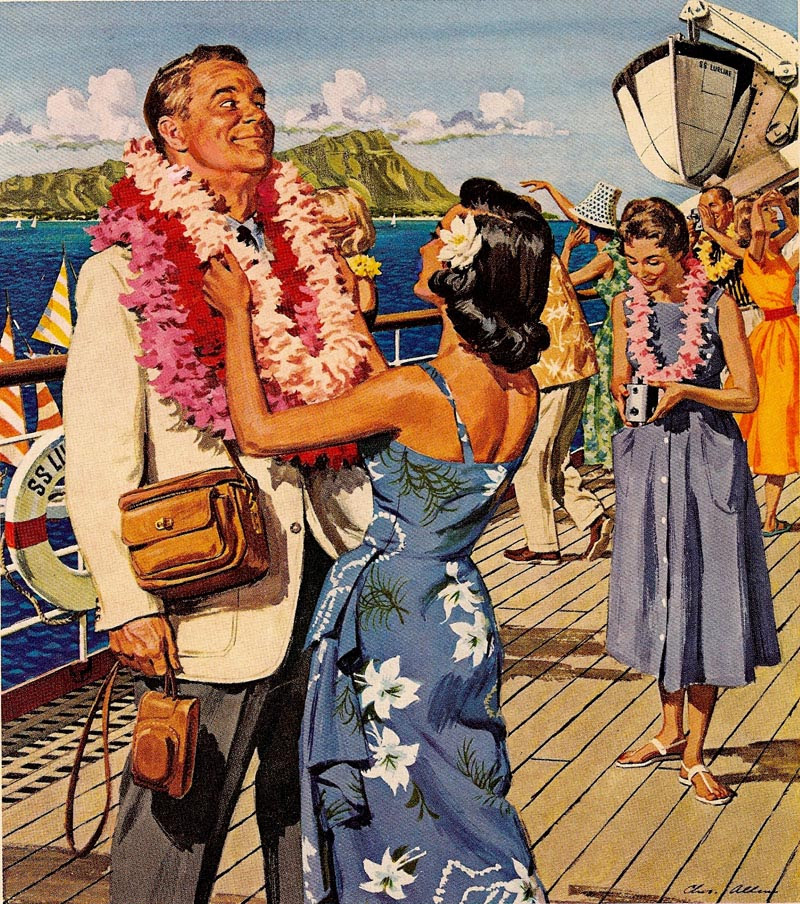 Competition at that time was from flights on DC 6's and Boeing Stratocruisers, both great prop engined planes. However...a ten or more hour flight to Hawaii in the usual bumpy, turbulent weather. Shortly after the 50's, jet travel took over....with a mere five hour flight to Hawaii...normally in smooth air. 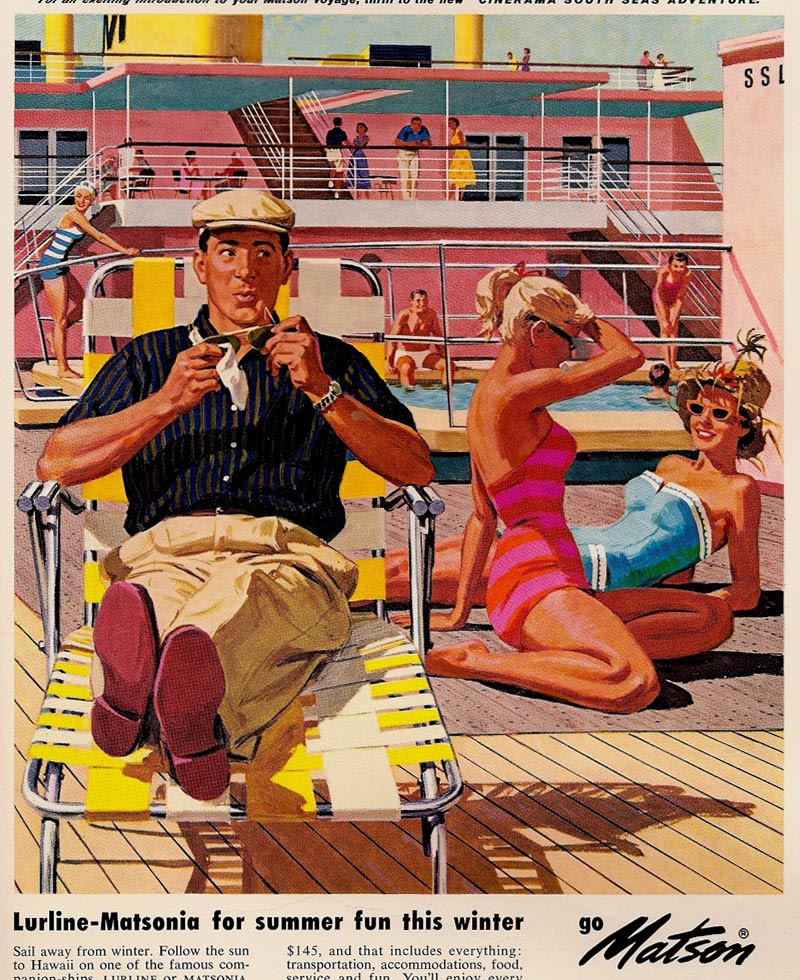 Matson and American President Lines turned to freight and container ships. These three illustrations were done in the usual Windsor-Newton designers gouache. 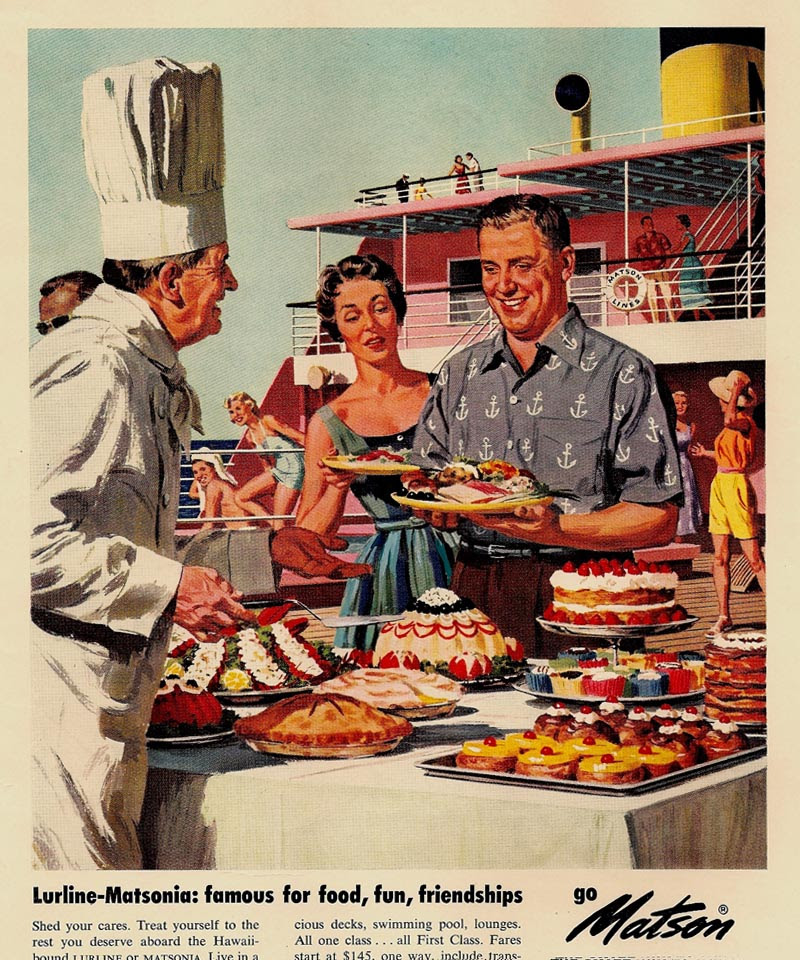 Then, a Japan Airlines B&W news ad from the same era. It was a line film pos over ink wash halftone. 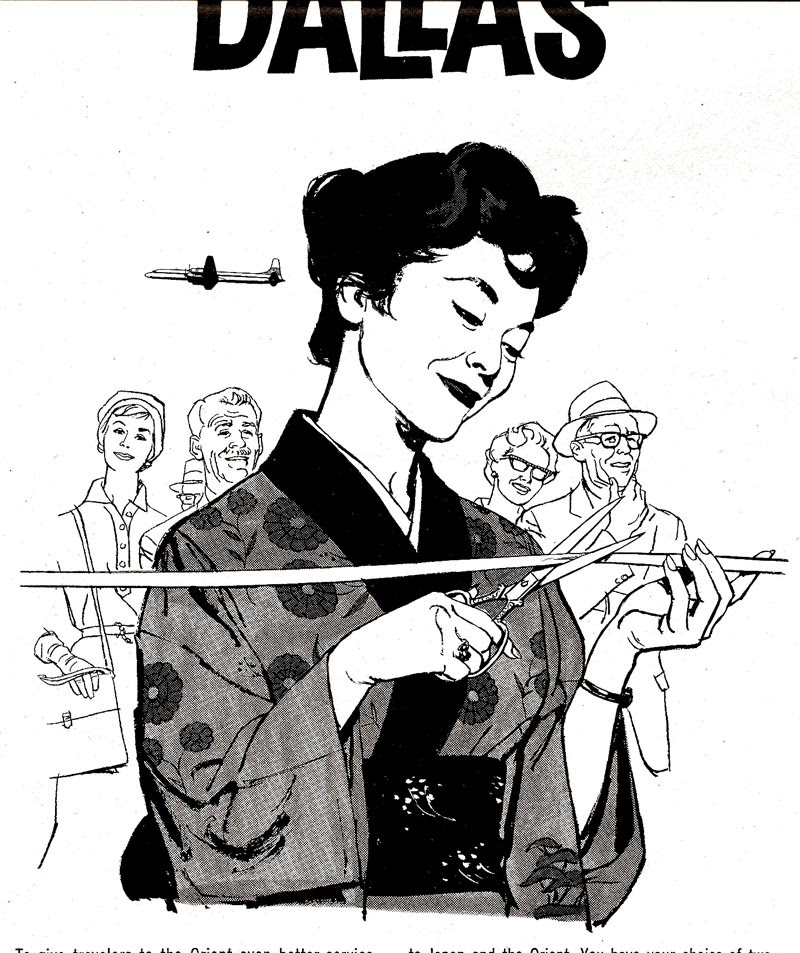 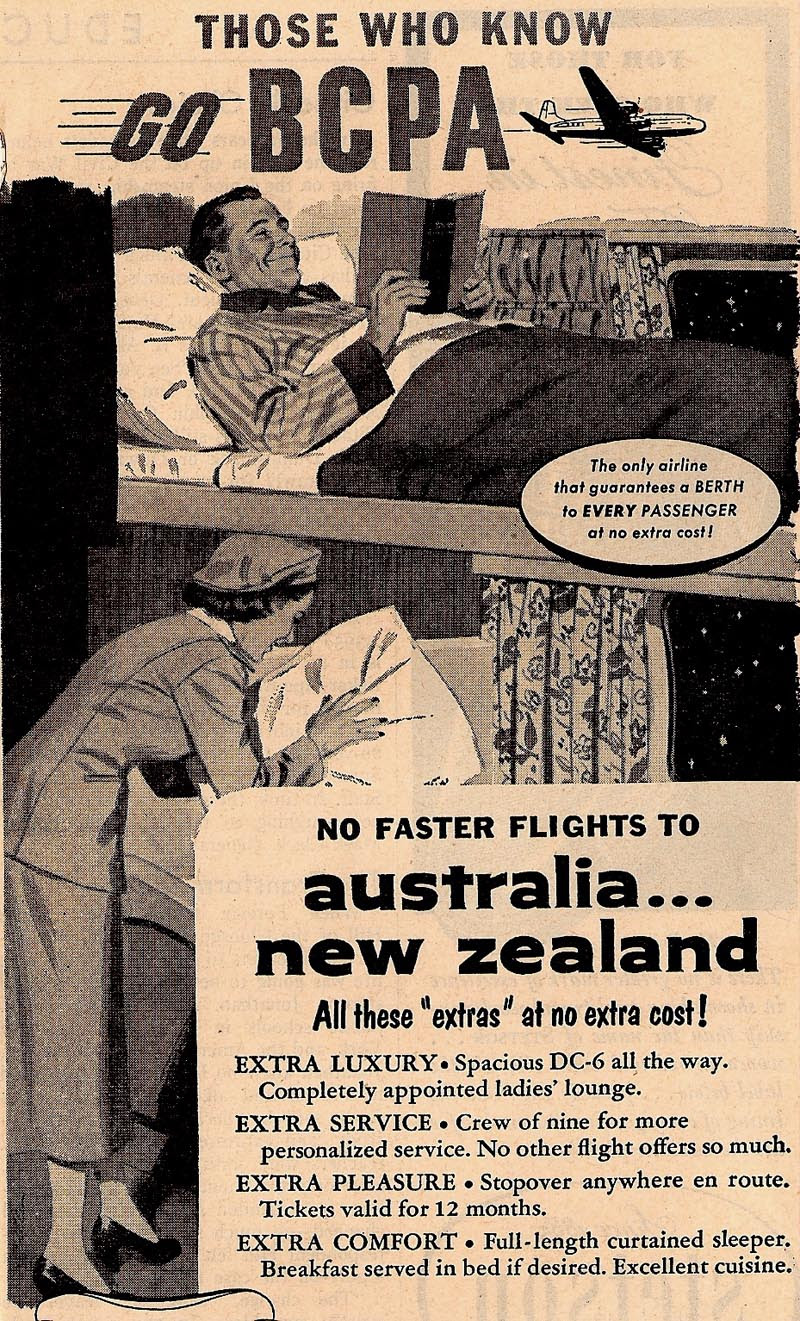 Another verse? Why not!

Wondeful art, thanks for sharing!

Aloha!
You think the Feds wouldn't approve that Cessnas "low turn un final"?
However, to me it looks still within limits. And how to say?...the ambient color reflects on that plane. It becomes part of that orange-rose background. Something not everyone with a paintbrush can do...

Those Hawaii-shipdeck parties are quite intricate. Love to look at them - as a well conceived, composed whole, as well as to look at any detail. To me they are illustration masterpieces of colour and design! See the opulence of that food plate, for instance! The cook...he somewhat looks like Lyndon B.Johnson serving...

Finally the difference between a somewhat squat DC 6 on the way to New Zealand (that must have been a long journey in "economy" class without those beds)..and the DC 7 passing by that elegant Japanese Geisha...

As always, thanks, Rich. those prop plane flights to southern climes were rough. I photographed a Stratocruiser at SFO, right after a flight one day...while the maintenance crew was cleaning the interior between flights. Air bag city! It was not a friendly environment! Trivia on the chef serving in the Matson ad. A great guy...our 'old timer' in the firm, did mainly air brush retouching. Colorful past....name, Sig Beartown, or Sigmund Bearnstag, in his native Norway. An excellent ragtime and honky- tonk pianist....and when young, played in a Montana brothel! He posed for more ads than we could count.

Love the guache paintings Charlie.
That one of the buffet is intriguing. The wife looks like she wants to slap her husband for sending his cholesterol sky high or maybe she's just annoyed that she can't get at the food because he's hogging it.
Interesting the way you've put the guy with sunglasses over the chef's shoulder. I wouldn't have done that and yet it works and really helps the impression of a crowded deck.. which I imagine was the intention.
Really appreciate you posting your work and look forward to seeing future postings.

Man! Fantastic work. I love the gouache paintings on the blog in particular. I don't know where to start....pretty girls and guys in superbly painted clothes. and those Hula girls are perfectly sexy/sweet, I sure do miss that in what passes for modern girl art. Any chance of you explaining your procedure for doing a gouache illustration??? I'll keep my fingers crossed for that ;)

To Michael....Will finally get to an answer...and do appreciate the comments. I could, or someone could, write a book on gouache painting. Those were done before acrylics came along. I used a mix after that. Same principle for watercolor, gouache, oils, and acrylics....start thin, then work gradually to thicker or opaque. Start with a composition worked out in pencil or ink...don't paint and try to compose at the same time! Values are more important than color. Do a color comp....sort of a road map, so you know where you're going. This could go on....but practice, practice, etc., etc. Good luck...and hope this a bit of help!

Those Stratocruiser "airbags"...
Now I know why they called the Douglas DC7C the "Seven Seas".

Thanks Charlie, I'm constantly looking for insight into how other artists work. I've always thought that gouache was a very neglected medium and it got totally overshadowed when acrylics came along.I sure do love what talented folks like you can do with it though!

ps. you should write that Gouache book ;)

Hi Charlie. I'm contacting you to see if I can use an image for my uke club. Can you please let me know if that's an option?