Still on last week's golf theme, the first scan is of the third PGA tournament cover I illustrated. Montages (a blog on the subject coming up) were the 'innovation du jour' in the 60's and 70's. The approach that I used on this cover had a lot going on within the Watson figure, and plenty of color. It needed a neutral background....I chose black to hold it all together. 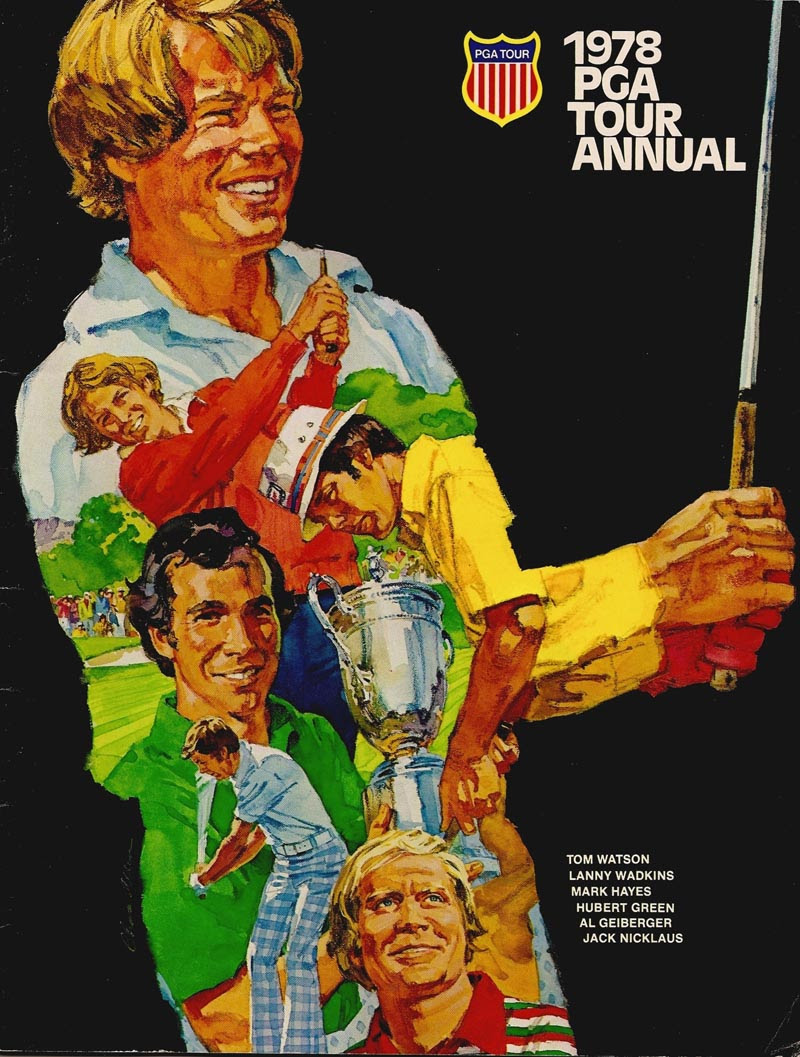 Next is an inside illustration, a graphic of Ben Hogan combined with a view of the Colonial golf club in Texas....I think Hogan's home club. Again the concept was a result of teamwork with P&H designers. 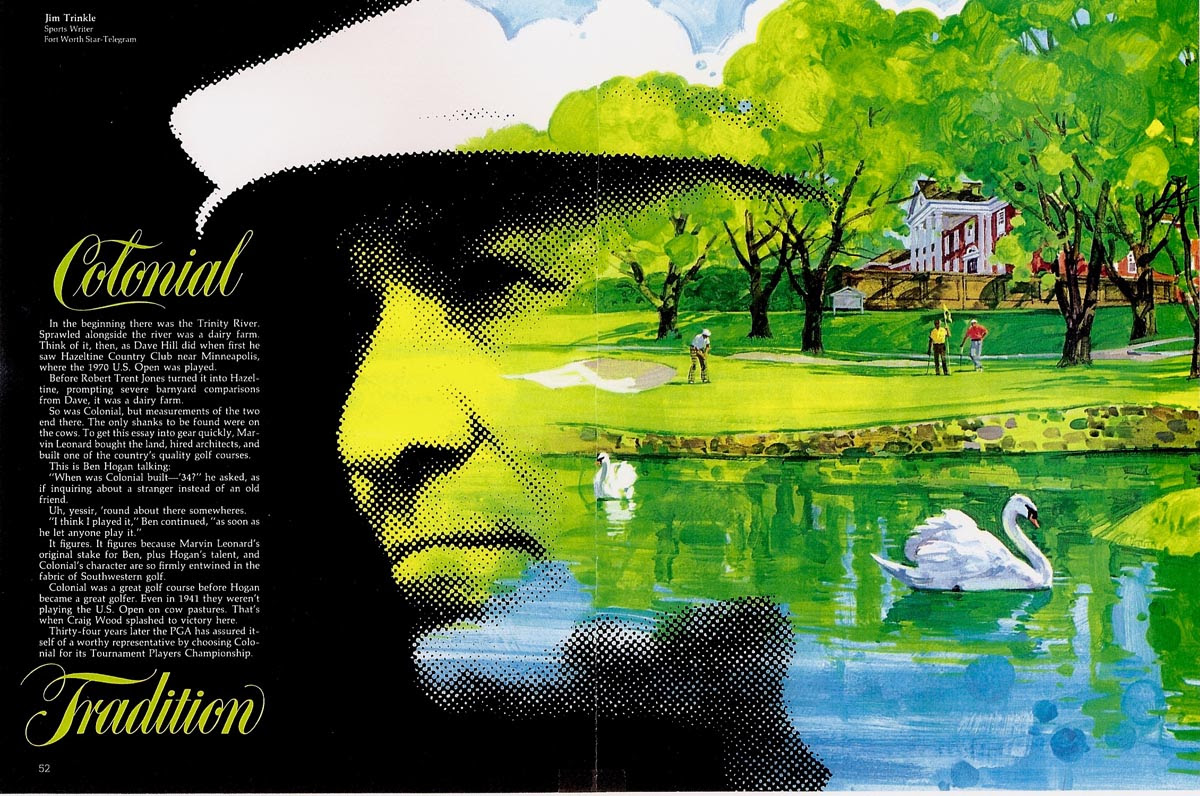 Separately, but on golf, a brochure assignment that came in during the 70's, and again during the montage years. This was for a tour sponsored by TIA Airlines, primarily a specialty and vacation charter business. 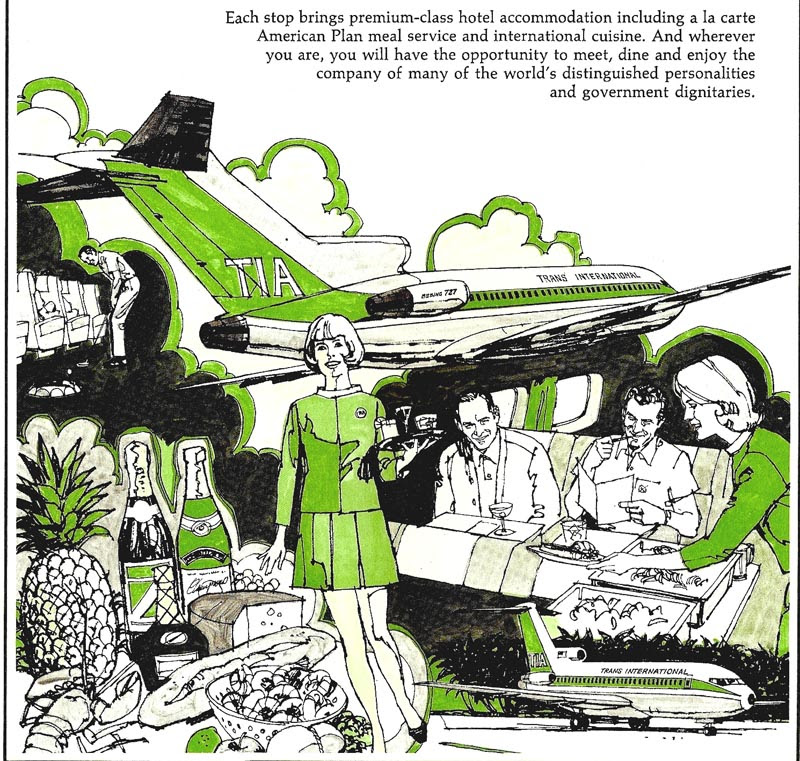 The host was Paul Hahn, a professional golfer, entreprenuer, entertainer, and trick shot artist. These were ambitious times....and I wonder today how successful it was, and how many golfers joined the tour. Somehow, I don't think it would 'fly' today....but I've been wrong once or twice! 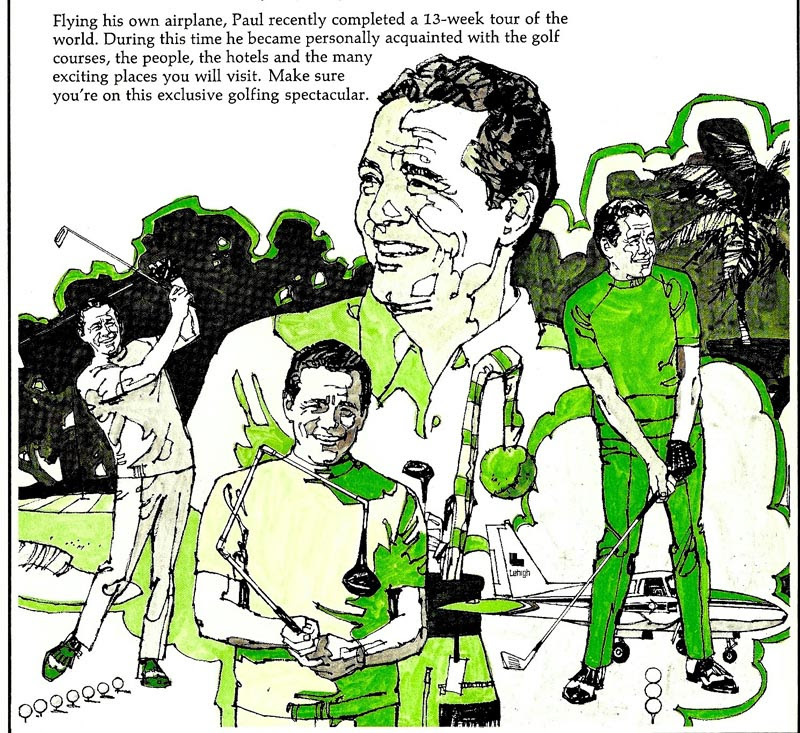 Done in line and two colors, using gouache mixed with acrylic medium on much of it. 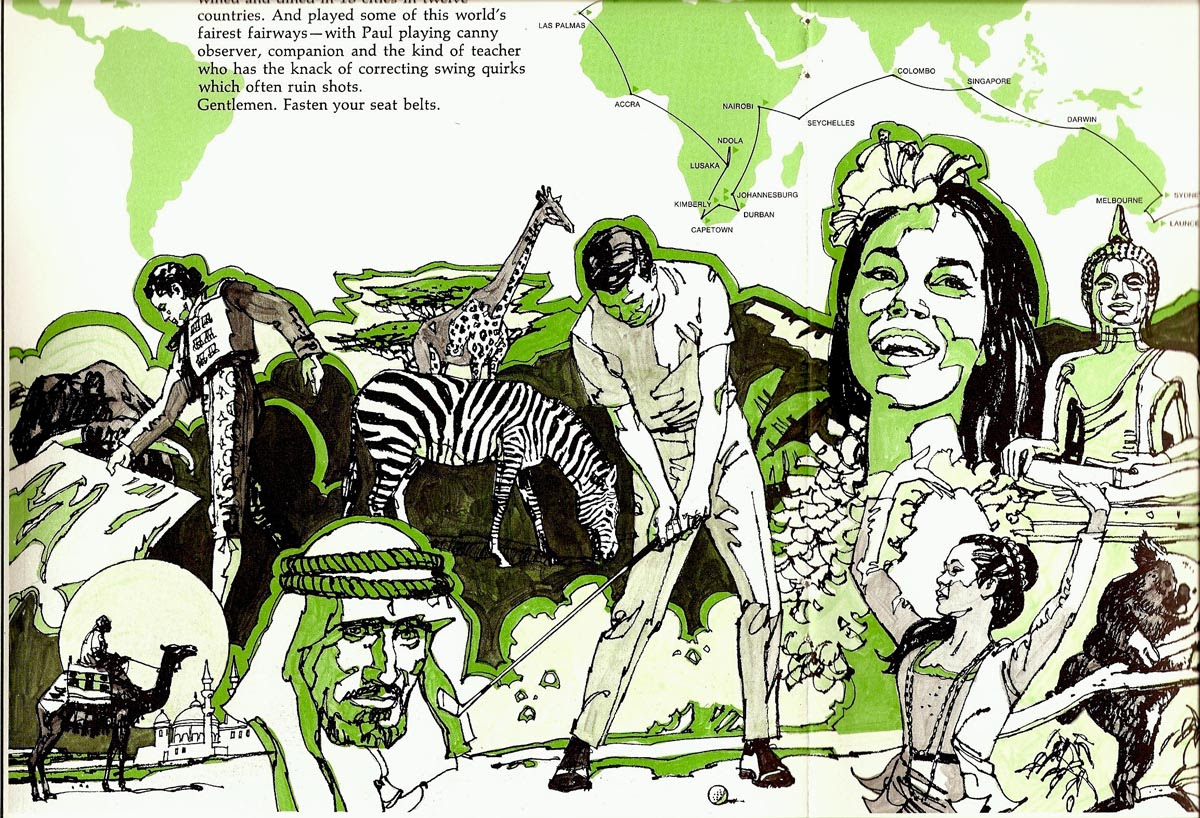 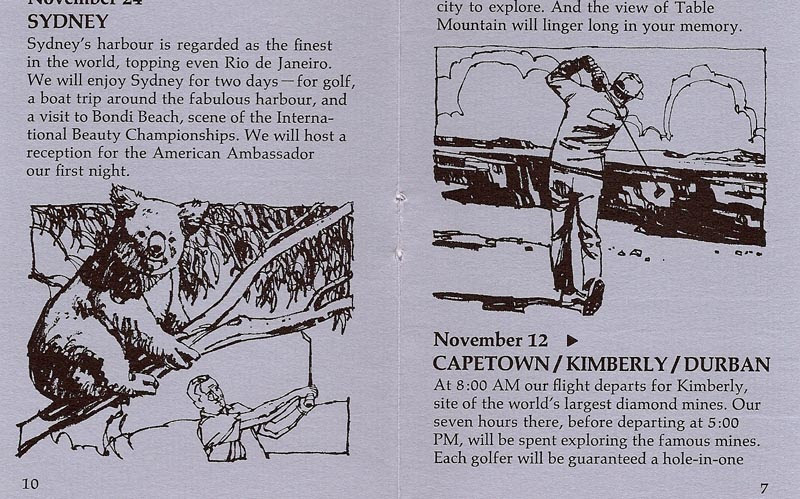 It was an expensive promotion, and as said, wonder how well it fared. I recall at that time feeling a bit 'burned out'....more interested in my homebuilt airplane project than illustration. 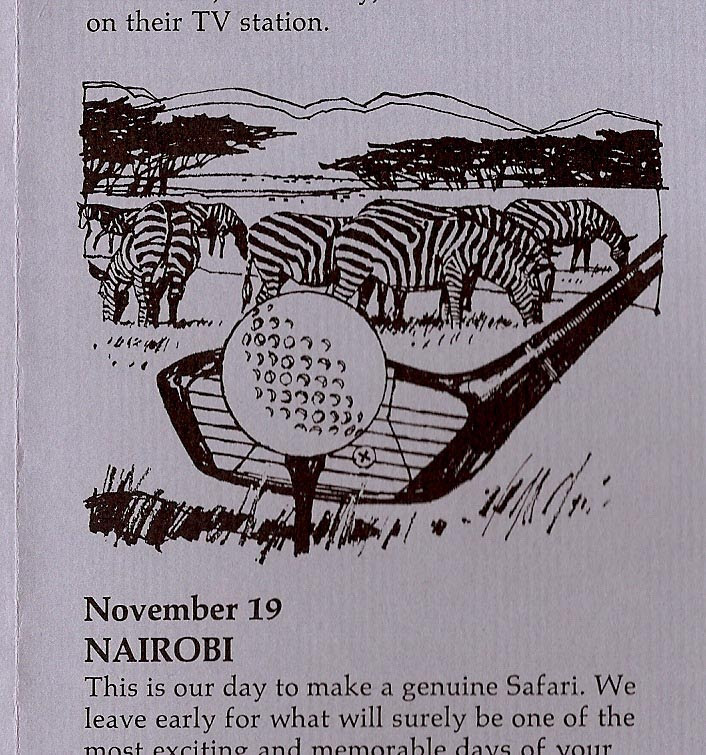 No doubt the project was a needed diversion after a lot of years of deadlines, and during some crowded 'pressure years'. Part of those concerns were the changing times....and that magazines and print ad budgets were rapidly losing out to TV broadcasting. 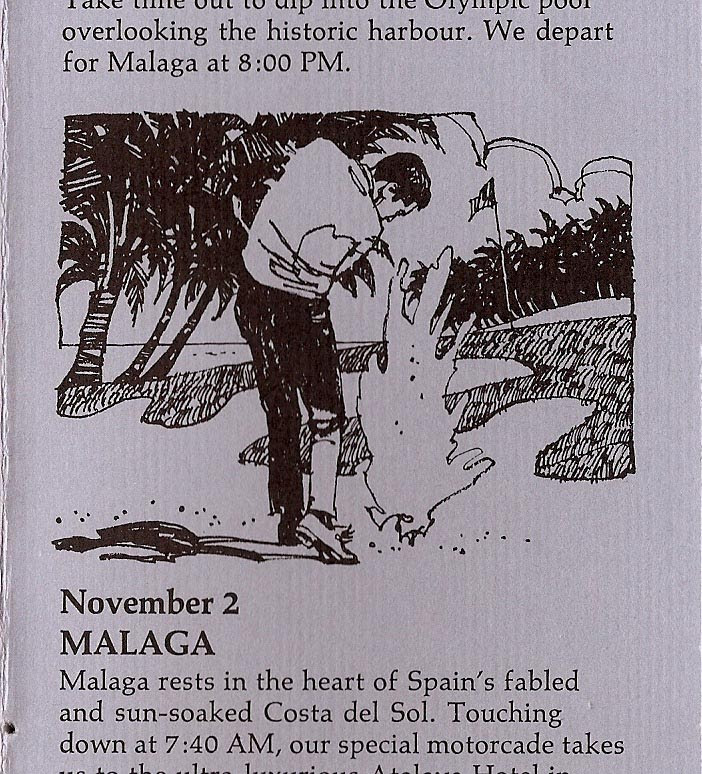 On an unrelated subject, and to pad the CAWS this week, we'll post a comp and finish reproduction of a Chevron product ad....not sure how the ad was used. 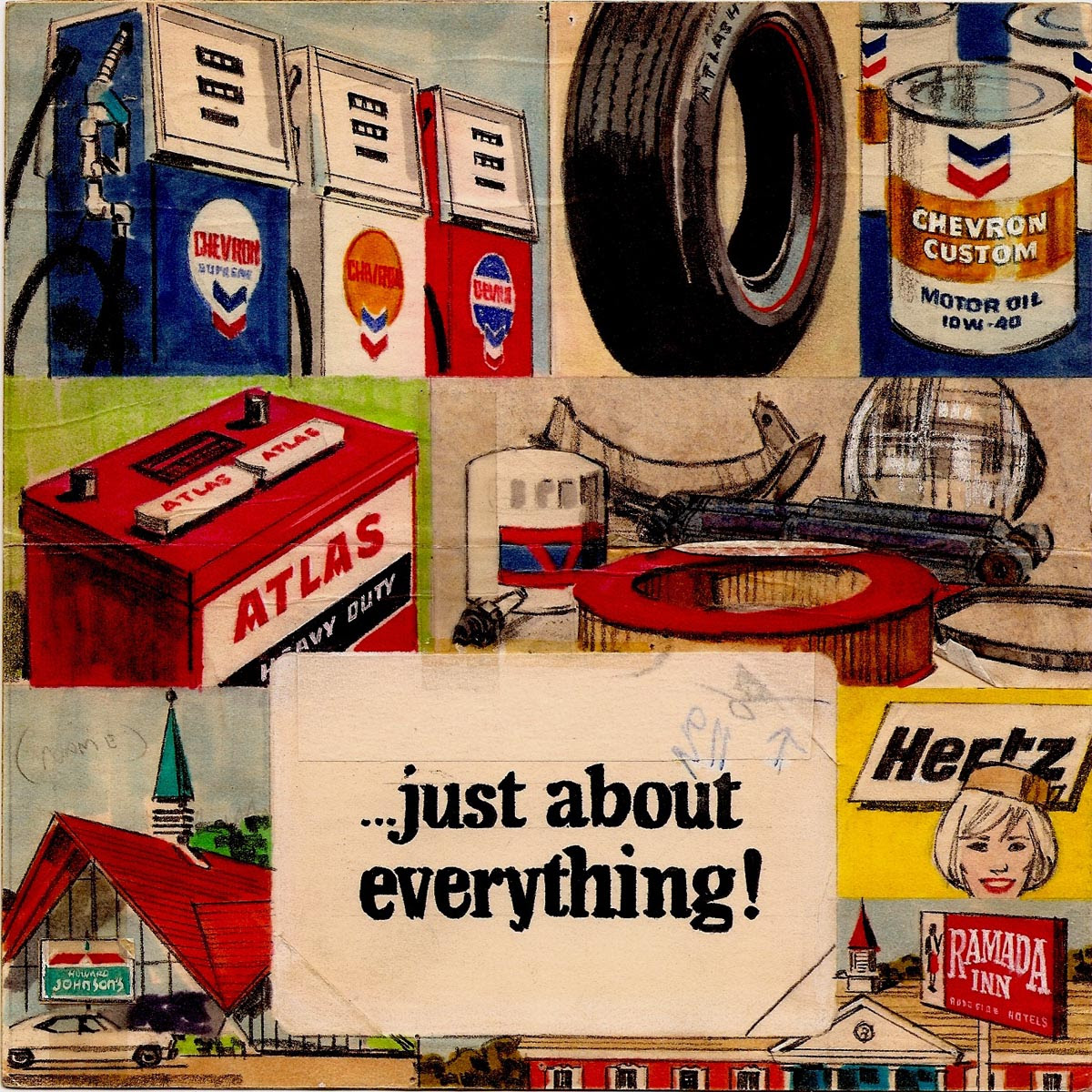 The comp was in marker and pencil, the finish done in gouache with an acrylic mix behind the products. 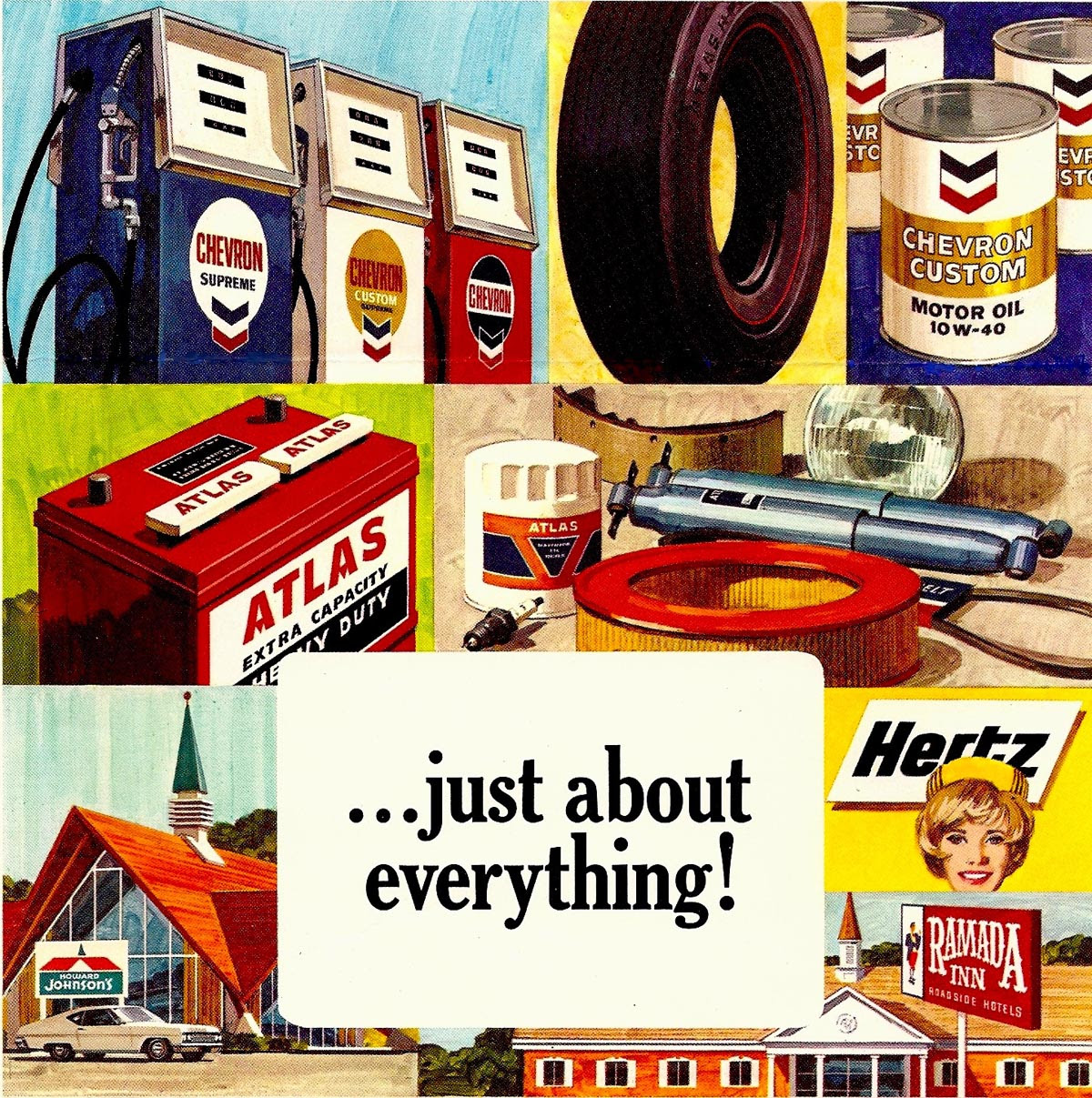 * Charlie Allen's Flickr set
Posted by leifpeng at 7:12 AM

as much as the black back with multi-color details is good, so is the two color with "echoed" outlines - it's all so darn incredible.

as we all know, a lot of design styles are cyclical (at least the good ones), and you can see many of your characteristics in today's work (even of different media).

Thanks, Matt. After seeing a contemporary's work, Bob Jones, on TI this week, I'm glad I went the western route, and ad work. His talents and variety are amazing, but as were a lot of illustrators, especially at Cooper's, they seem tracked into two or three categories. Out here, I was left to illustrate in styles really not that influenced by other artists and magazine traditions. Ads were banal, boring, and pure hucksterism, no doubt...but there was a variety of work, and I think more freedom. Also prices seemed to have been as good as NY, if not better. Enough!

Wow! That golf tour sure was ambitious! They certainly were different times, tho' in the early days of "jet-set" travel, I can see it appealing to a certain cache. I presume it was pre '73 and the oil crisis.
On another topic, any chance of seeing some pics of your self build airplane adventure? I remember seeing ads in the back of aviation magazines for these, but I always thought they were about as likely to fly as sea monkeys or those one-man subs you could build for $10!
Lovely work Charlie.

Glad you asked, Roger....in fact, glad anyone asked! There are thousands of homebuilts flying...some very sophisticated, hi tech creations. Since flying in the service influenced my young years, I still find it interesting....though no longer participate in my 80's. I'll post another blog on planes and include a few shots of the homebuilt. It never flew out of the garage....I got older faster than the plane got finished.I gave the engine, instruments, wheels and brakes, etc. to a son in law....who did finish his plane. I've flown in it. And finally, a hobby can get to be a nuisance if it drags on too long.

As odd as this comment may be: I admire those tires. I think hardly anyone has been able to rend tires as well as Charlie did.

I keep chirping up here! Thanks, Rich....as a friend said a few years back, 'I'm not a flat tire....I'm just a slow leak!' Rendering tires, batteries, shocks, filters, etc. was rather mindless work....but to be honest, I enjoyed drawing almost anything....especially if I was paid for it. Some people like crossword puzzles ( my daughter for example). Drawing and painting was a bit like solving a puzzle, but more fun.

What a great post, I actually found it very thought provoking, you just never know sometimes when a golden nugget of information is going to land at your feet, thanks

I found your blog when I was looking for a different sort of information but I was very happy and glad to read through your blog. The information available here is great. lollies

Golfing is a way to relax your mind and escape the hectic traffic. Seeing a green background and a beautiful landscape certainly help calm the tensions that you feel inside. But sometimes, it's not really time to go far to enjoy the golf at golf courses. But golf fans eager for you, you have some way to play sports, even at home. Indoor Golf is a good idea for sure. What you need to do is buy the supplies and equipment needed to perform well in the game indoors. Here are some tips to help you learn what to take this activity.

This is a good subject to talk about. Sometimes I fav stuff like this on Redit. This article probably won’t do well with that crowd. I will be sure to submit something else though.

I really like your blog content the way you put up the things…I’ve read the topic with great interest.

Man sign up with www.BreezeAds.com its far better than google adsense alternatives