Again, the upbeat old tune, 'There'll be some changes made'....from the 30's. The change I noticed in 1980 when painting these Matson subjects was that I felt older. Not physically, but I was 58 and had been illustrating actively in San Francisco for over 30 years. On my occasional visits to clients and agencies, and even at P&H, many of the artists and AD's were in their 20's or 30's. I was the 'old guy' and feeling a touch of discrimination. Naturally, I overlooked the early days when I and others of my generation were the 'new kids' on the block....replacing many older illustrators.

We're back to the Matson Centennial brochure and my third painting, originally planned for Carl Evers. Before getting to that, a comment on the SS Monterey illustration posted last week. One 'old salt' at a Matson hosted luncheon asked why I had omitted the gun tub on the bow of the ship. It seems when the troop ships had been modified and painted grey for military service, several gun installations were added....bow to stern. I told him the only reference provided was of the 'Lurline' and 'Monterey' in peacetime white....no gun tubs! At that time I had just received a B&W photo of the SS Enterprise, Matson's first non-sail freighter. Once again, an ancient photo....and the only reference Matson had of the ship. The same 'salty gentleman' had served on Matson ships since the early 20's. I asked him if he knew what colors were used on the 'Enterprise'....the hull looked pure black....and neither Matson nor agency people had an idea. He replied, 'we called it brindle-shit brown!' I don't think Windsor-Newton gouache included that color....but the hull was duly illustrated in various shades of umber, the super structure, Matson yellow with white trim.

Going back, a better scan of the 'Emma Claudina' photo. 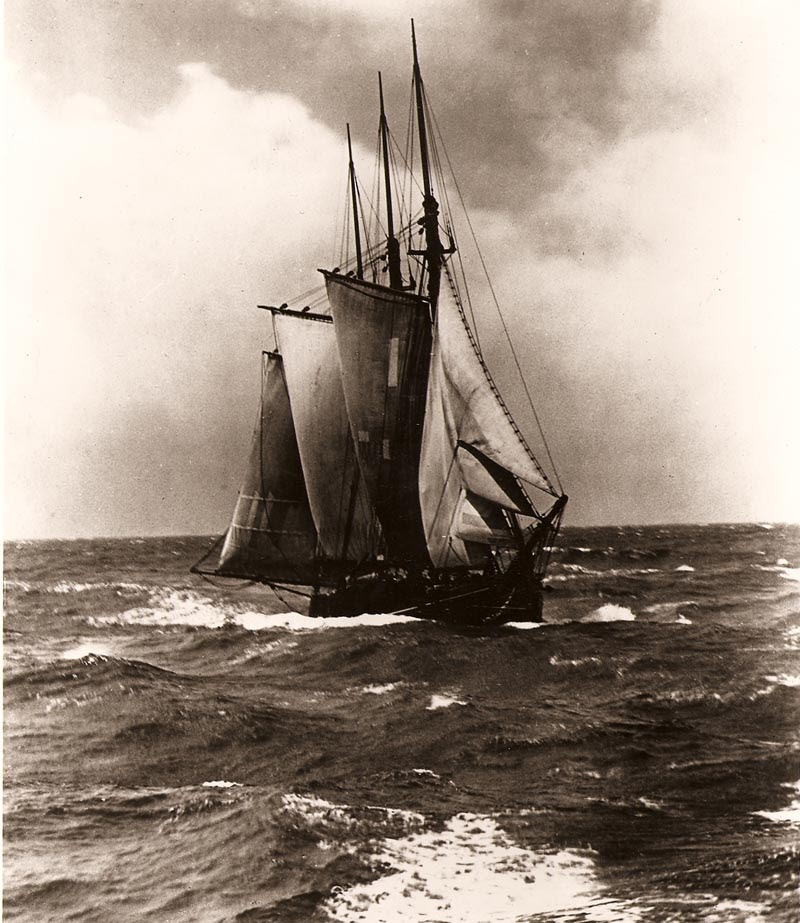 In this it had become a coastal lumber schooner. They were often heavily loaded....a mere foot or two above water line. Next, a poor scan of an early comp done before the Claudina painting. 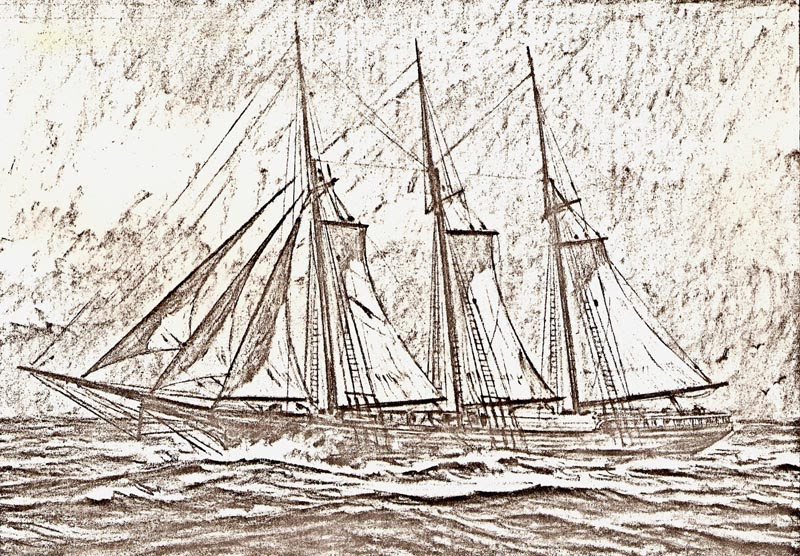 Following, and finally, the 'SS Enterprise' in 1902 at Hilo Harbor, on the big island of Hawaii. The 13,700 foot Mauna Kea volcano in the background, at times of the year snow covered....in a tropical climate! The Enterprise was a small freighter, the first oil powered ship in the Pacific. It took general cargo and 22 well fed travelers....at $50 per trip! 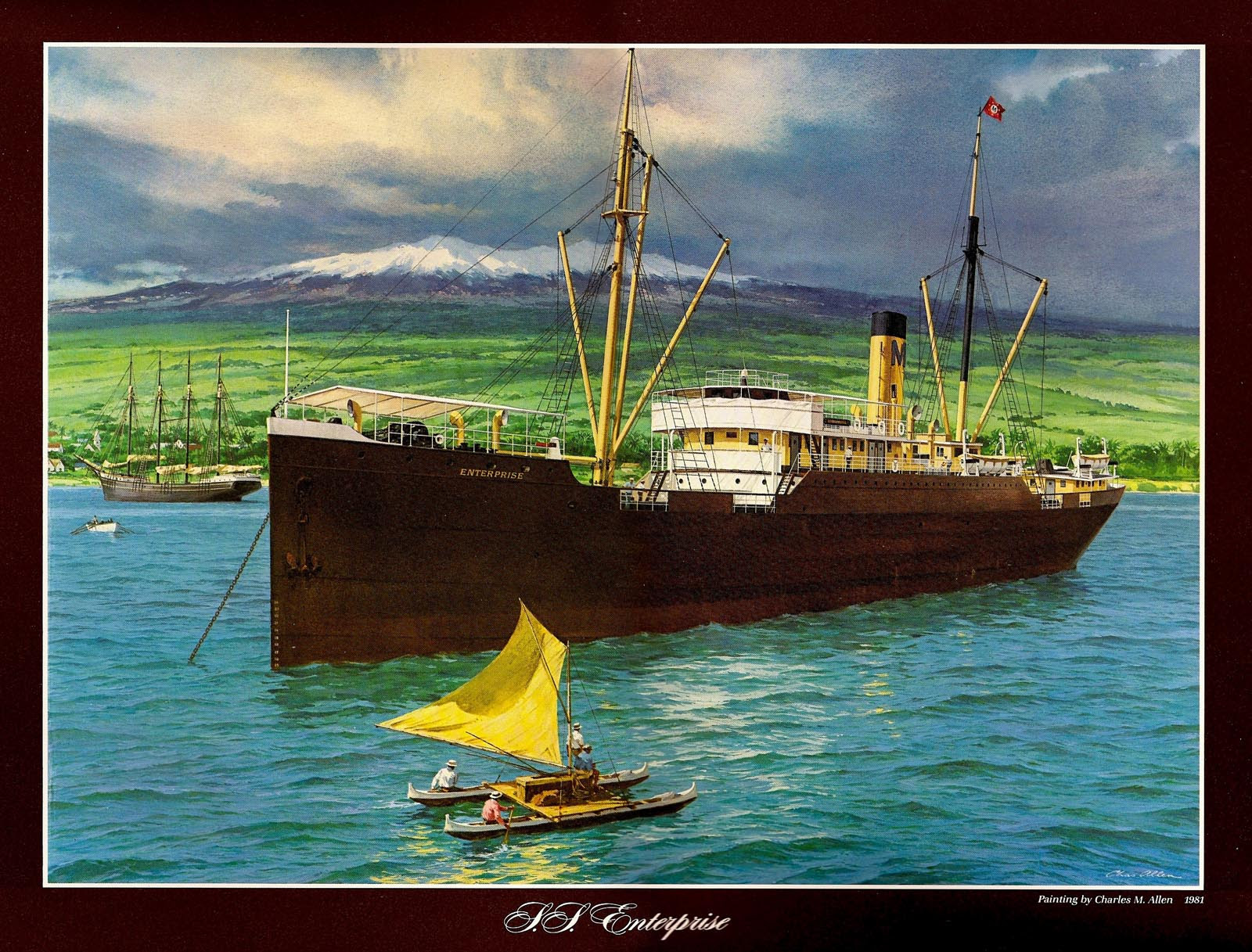 Next, a commission several years later from the Matson Company direct. They wanted a large oil or acrylic painting on canvas to present as a gift to an old Japanese shipping company, NYK Lines, on its' centennial anniversary. The companies had cooperated for many years with shipments, ports and facilities, and deliveries. The subject was NYK's first container ship leaving San Francisco bay. 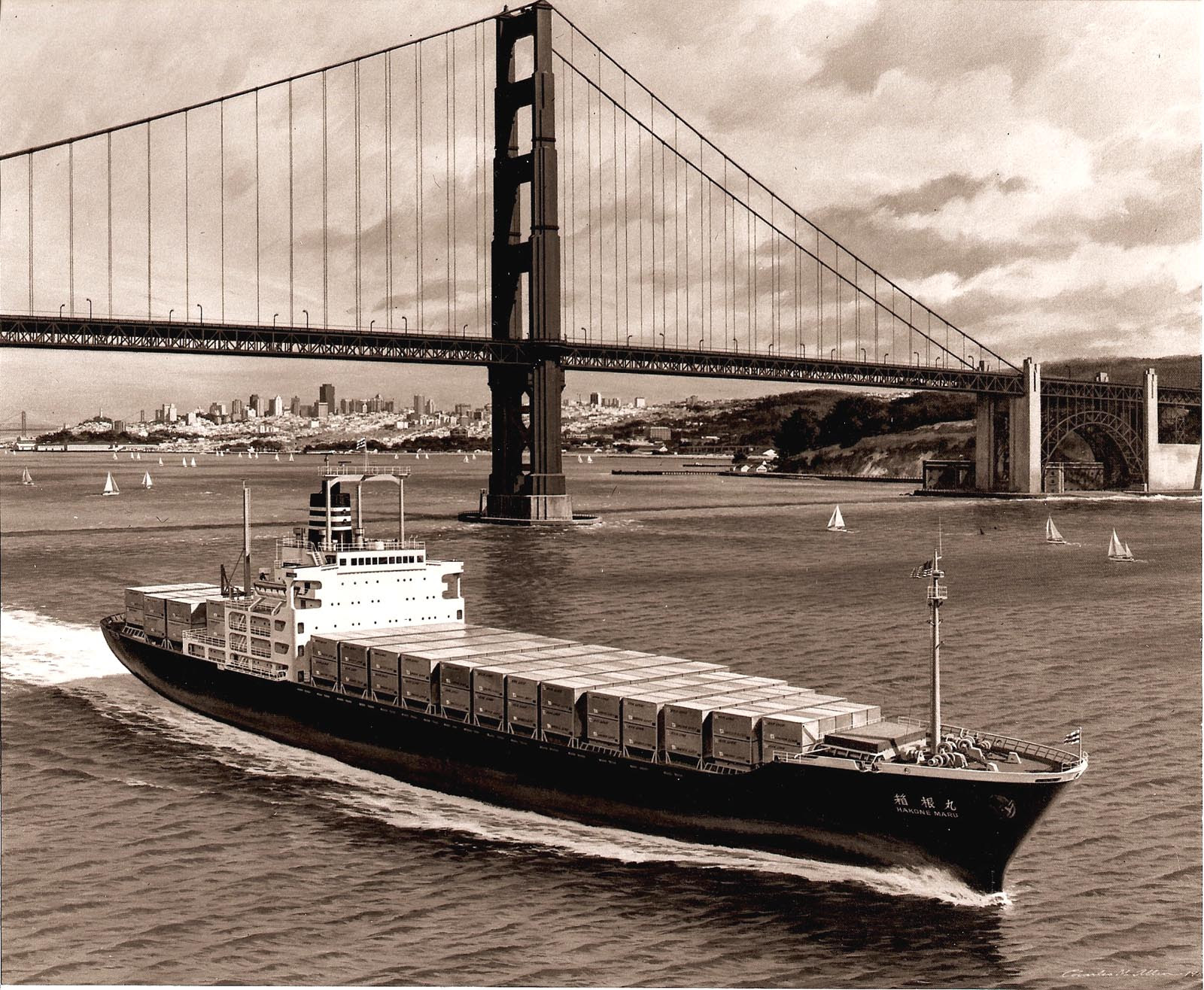 On the painting (this copy is my only record) I used both oils and acrylics. It was finished and framed in the mid 80's. The dark Golden Gate bridge was it's usual industrial red in the painting.

Last, and displaying my limited marine painting portfolio, a color comp for one of those 'less established' clients that have been mentioned on CAWS....a client that needed better 'vetting'. At the time, president of the S.F. Yacht Club, he owned and raced a high tech crewed sail boat and wanted a painting for his Marin Co. Savings and Loan office. Also, he wanted to see a sample of sail boats on the bay. I knew nothing about his yacht....and whipped out this comp. 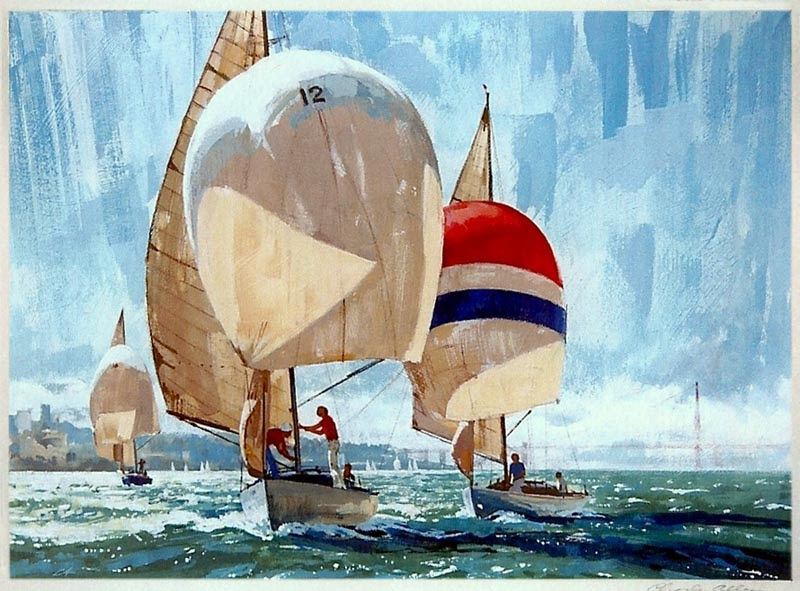 He put it down as 'small time', and ordered a painting of his boat on a windy, stormy day, the GG Bridge in the background. Also he finally produced a photo of his Class (?) racing boat. The painting was completed and accepted....but never paid for! Another story for another time!

* Charlie Allen's Flickr set.
Posted by leifpeng at 7:49 AM

Beautiful work. It's amazing to me how versatile your work is. I could spend many hours going through your blog. Thank you. ;)

I love that comp, full of energy!

Todays Inspiration linked me to your blog, just had a great time getting inspired! I love the fact that you share the roughs. Thanks for sharing.