One of the great old pop songs from the early 30's, composed by Billy Higgins, if not mistaken. I seem to recall Fats Waller had one of his classic piano and vocal renditions of the tune. Yep. the CAWS doesn't need to remind....all together now....'change is the constant!'

In the late 70's both print media and the ad business had changed drastically. Gone were the billboards, many of the magazines, most of the big print ad budgets. TV was taking over. A lucrative illustration assignment in San Francisco was rare. Sometime in 1979 it came as a welcome surprise to receive a call from Allen-Dorward with a request for three large marine paintings....for an ambitious Matson Centennial brochure. Three known ship or marine artists had been commissioned by the agency. I was the fourth artist selected. Included was Carl G. Evers from the east coast....a well known and widely published marine artist. I had clipped Evers ad illustrations over the years with great admiration for his talents. The project had already begun....Evers had completed his first of two. The painting subject, a modern Matson container ship approaching Hawaii. Evers was 82 at the time....and the dozens of tiny Matson logos on the container ship boxes caused his hand to cramp up. He complained....and chose to do only the one painting. Hence....I was offered three paintings instead of two.

As usual, these stories get too long. I was not known as a 'marine' painter....but helping out in this case, the AD for the marine paintings was a former BBD&O art director. I had illustrated Matson tourist ads for him (earlier posted on CAWS)....his name now escapes me....and I must assume he chose based on trust. The painting size was to be a minimum of 19 x 25 inches....large for my style of work....and the paintings were to be hung in the Matson building offices in San Francisco. The medium could be oils, acrylic, or gouache. Evers was a master at gouache painting....and because I was more familiar with it, I chose to 'emulate' Mr. Evers. There was no way to match Carl Evers masterful handling of the sea....and it meant a lot of homework and study to attempt the various moods and conditions of the ocean. It also meant returning to a more academic style of painting. That was mentioned earlier on CAWS.

The scans will begin with three of the opening pages in the 12 x 18 inch well designed brochure. 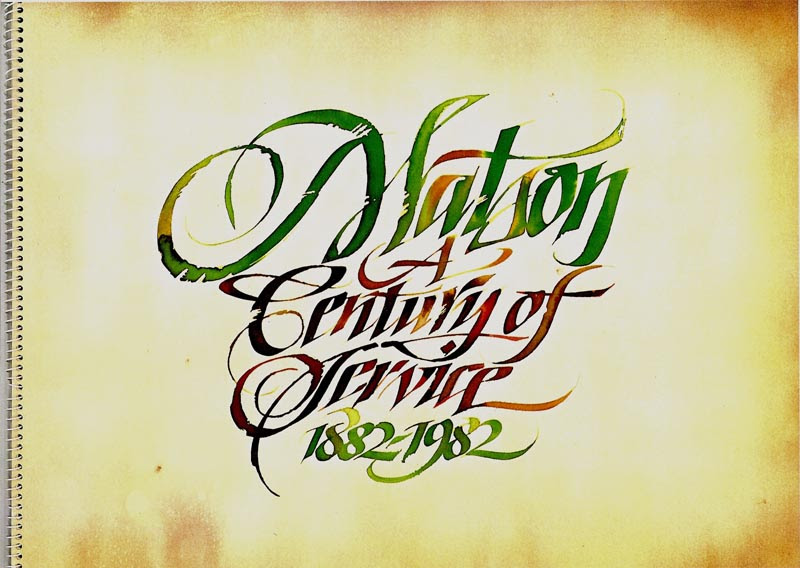 The art director on the brochure design was a beautiful and talented young Chinese lady, Winnie Lum. The pages were on heavy stock, spiral bound....and the well written brochure covered 100 years of Matson history from sailing ships to modern container ships. Each painting was accompanied by a brief history of service and accomplishments. 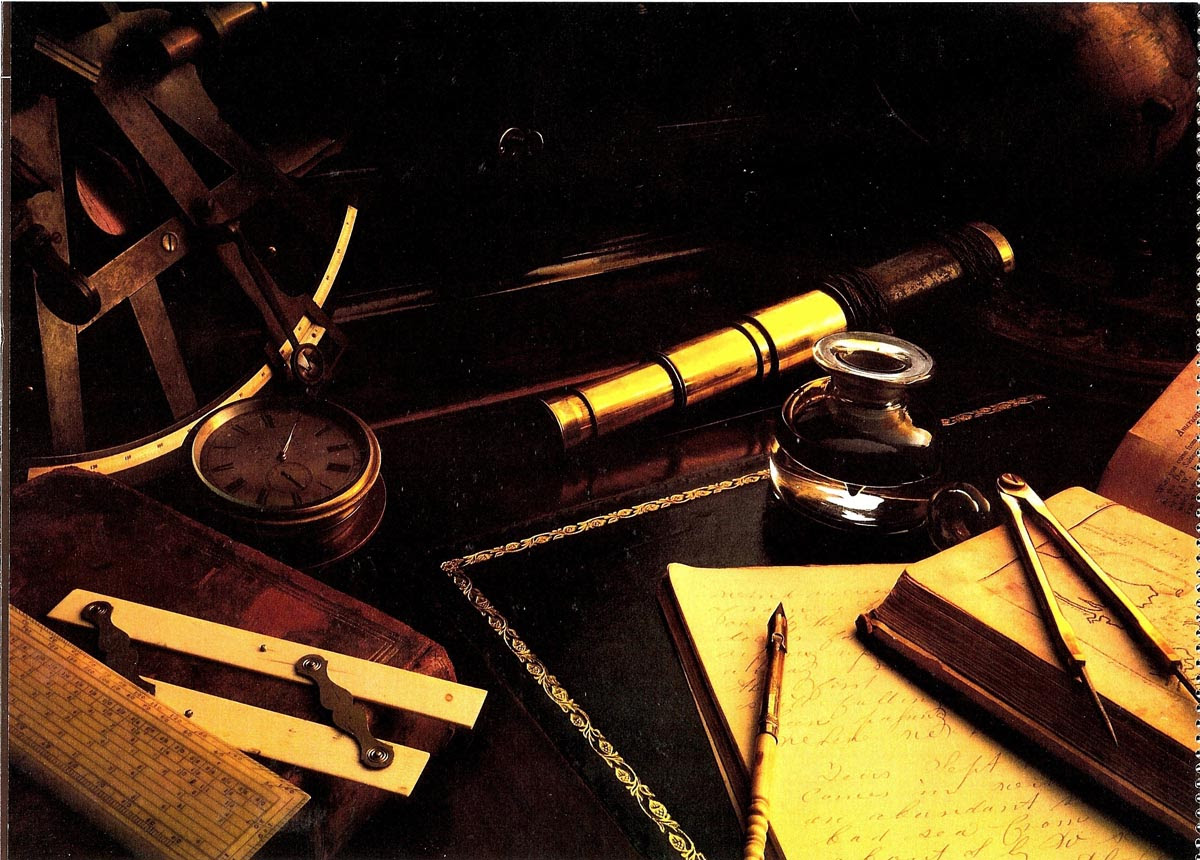 The second introductory page shows a dark, indistinct photo of a three masted schooner, the 'Emma Claudina', William Matson's first sailing ship. This ancient B&W photo of the heavily loaded schooner was the only reference Matson possessed and provided for my first painting. It required a lot of research in libraries, books on sailing vessels, and time spent at the S.F. Maritime Museum to accurately portray a profile view of the 'Emma Claudina'. 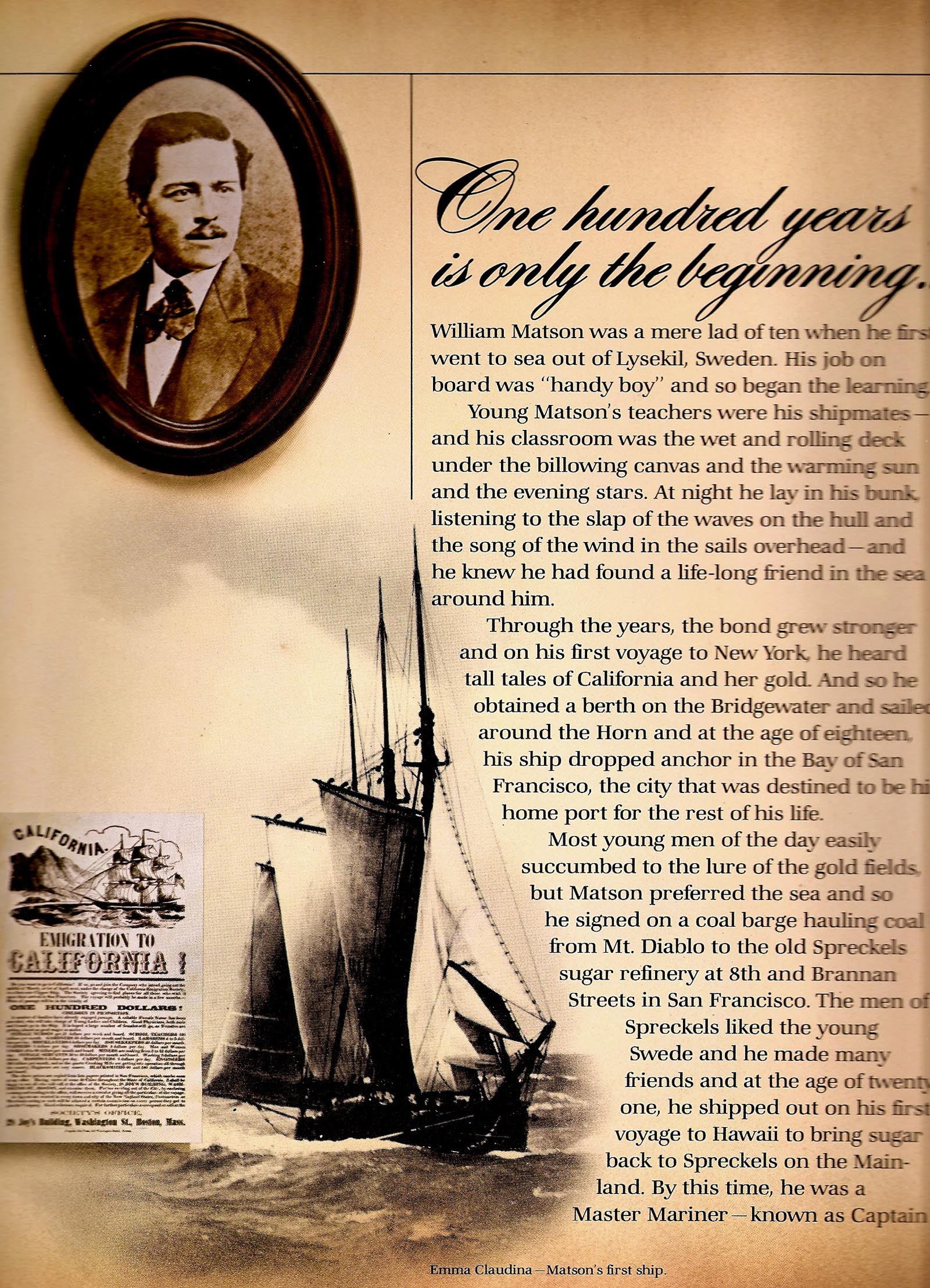 Illustrating it in heavy seas in the mid-Pacific was still another challenge. 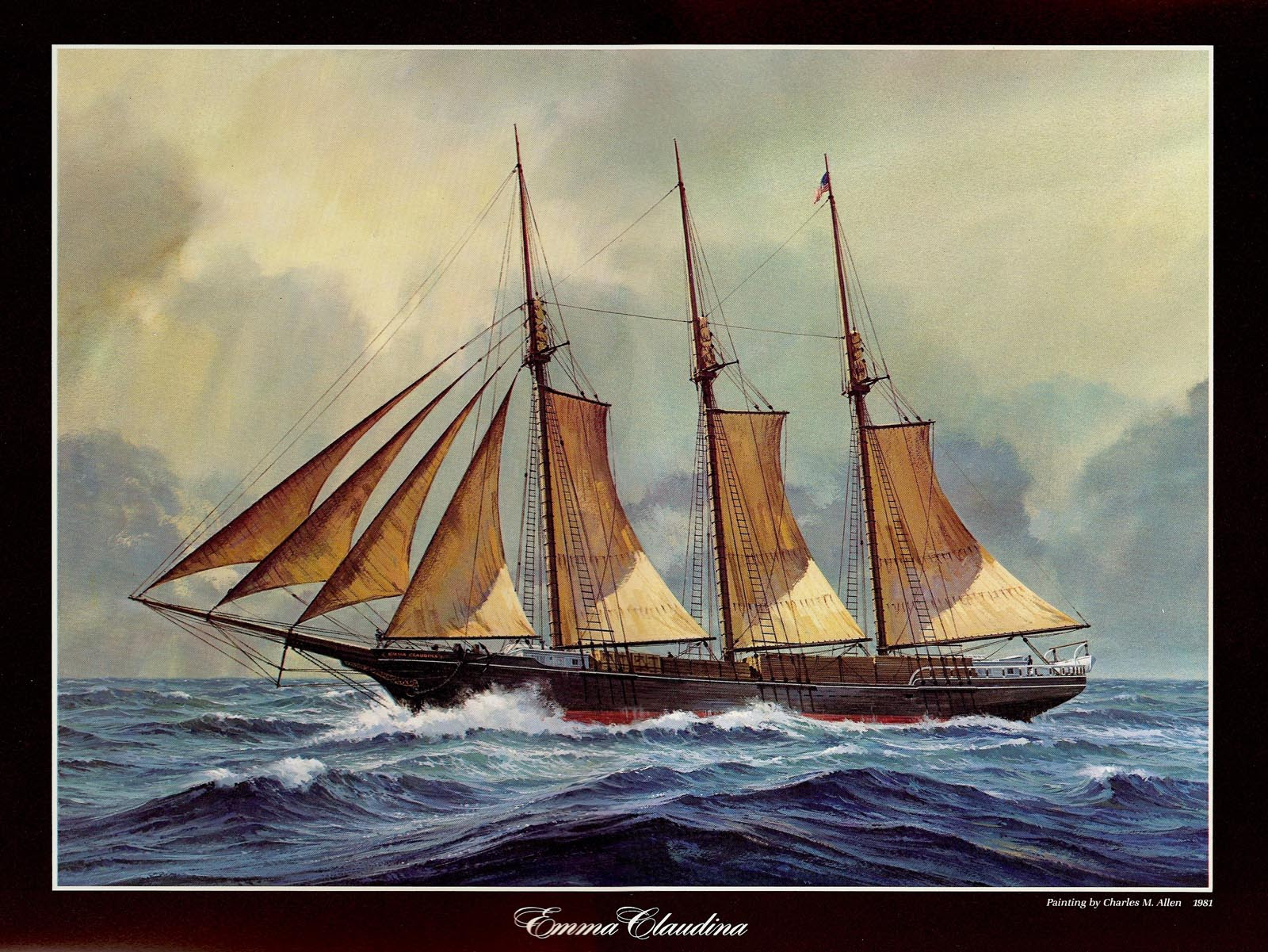 The painting of the SS Monterey, in wartime duty as a troop carrier in the Mediterranean, was the second painting requested. Both paintings were done in 1980. Monterey had been one of two Matson tourist liners to Hawaii....before the age of air travel in the Pacific. In WWII both ships served valiantly as troop carriers, mostly on the Atlantic side. In this scene, the convoy had been under attack by German bombers. The Monterey survived and rescued over 1600 Canadians from the former Grace Lines troop ship. 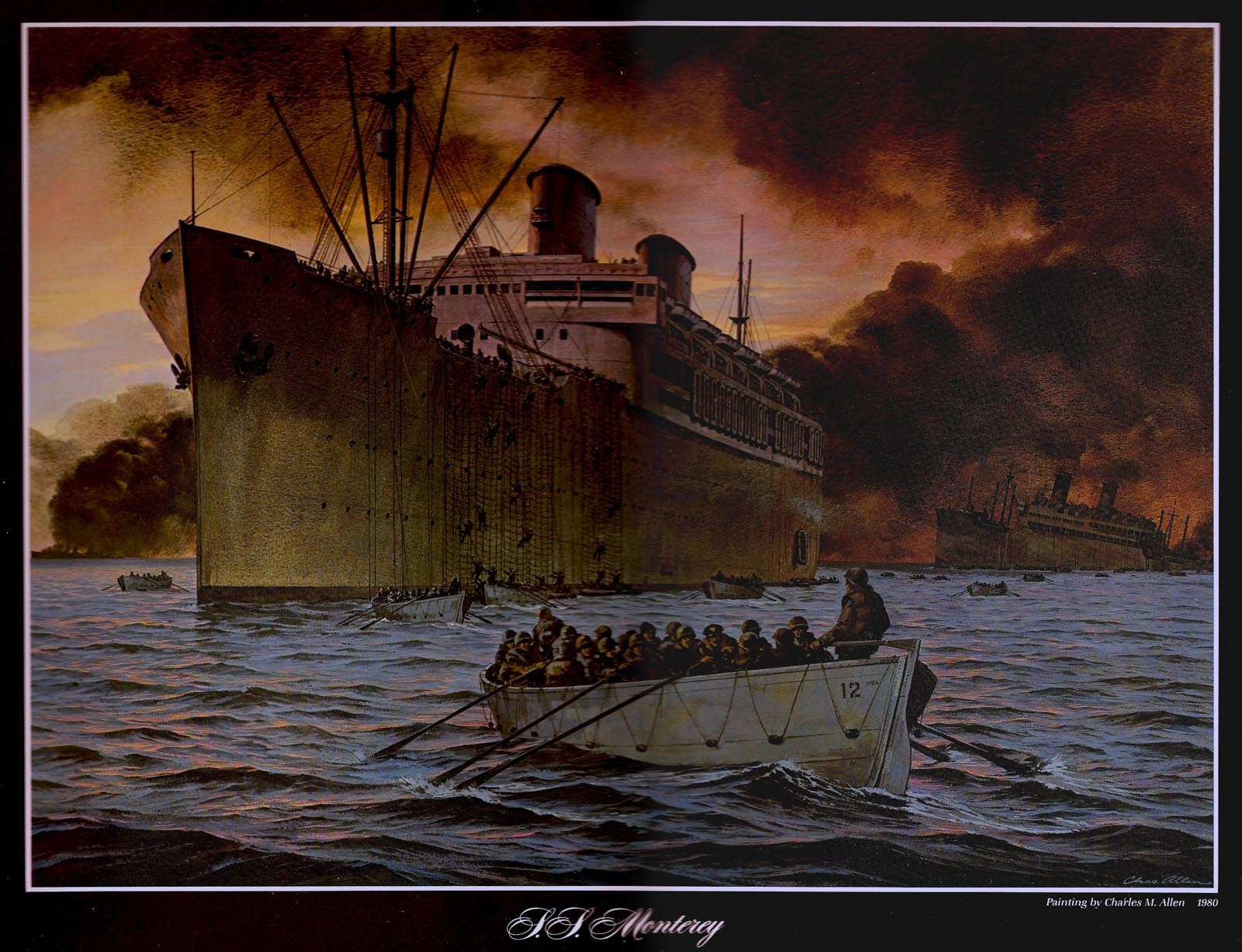 I wanted to illustrate the attack....but the agency stated, 'we don't want to start WWII all over again....just show the rescue!' The smoke screen depicted was put up by escort destroyers in an attempt to protect the convoy. Pencil comps were made and approved by the agency and Matson ad people before the paintings were begun.

Last, the illustration by Carl Evers of the Matson container ship 'Kauai'. 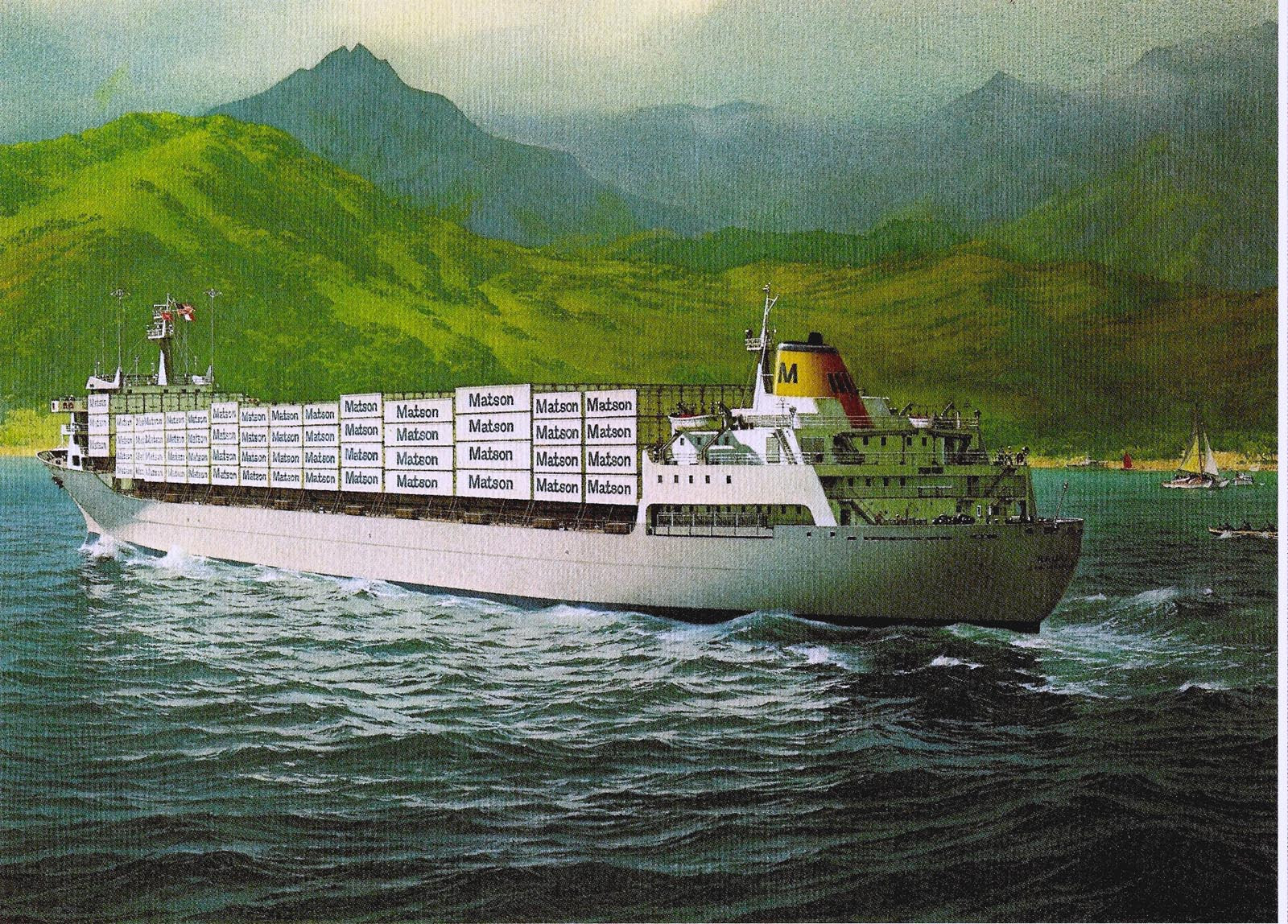 A typically professional and inspiring gouache by Mr. Evers. It was a loss that he didn't complete the second painting. The brochure story will continue in next week's CAWS.

That water is just incredible.

Awesome Charlie. Some of your best. And, as always, the commentary is interesting, fun, and insightful.

Masterful stuff Charlie. What was the third painting?