From the late 60's and early 70's....another post in the series of prints planned to sell, described in an earlier CAWS. We've shown most, if not all, of the antique auto prints and WWI airplane illustrations. The other two 'selected' categories, four in each, were of horses and African animals. All of these, as mentioned, were 'portraits' of the subjects in what I deemed natural settings. And all were crisp but conservative renderings in gouache. Intended for youngsters and consumer sales, my amateur research indicated that the public cared very little for painting techniques....subject and content were the basic objectives. Many folks I had talked to did not differentiate between photos and illustrations. It was the image, impact, and subject matter that counted. These illustrations were done over two or three years....and at the time to be 'serious' about the project, I thought a backlog of illustrations was needed.

The first scan, not one of the intended prints, was our youngest daughter at about seven or eight with our first venture into 'horsedom'....a Shetland pony named 'Trixie'. 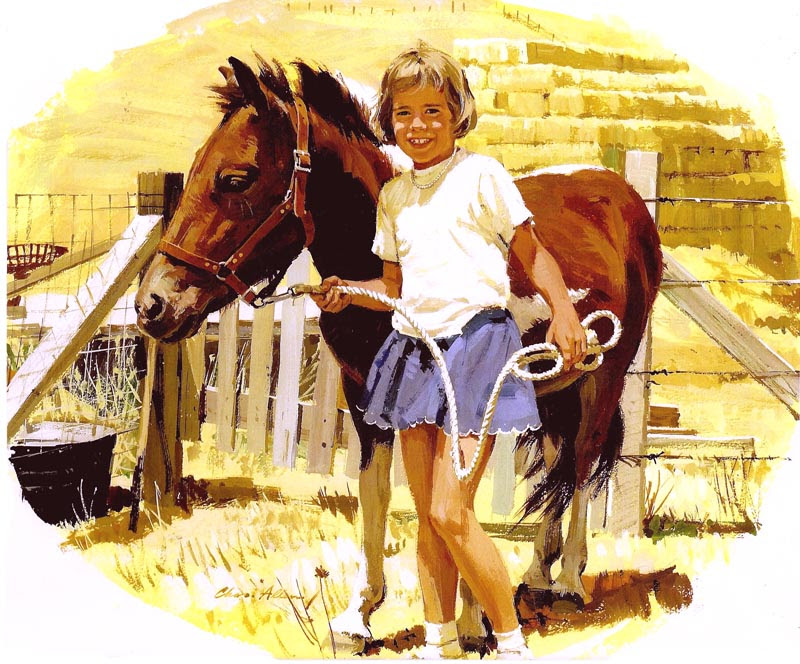 Her only trick, and she was quite adept at it, was a quick shrug or change of pace at a trot....effectively ejecting our daughters onto the ground. She was primarily a 'pettin' pony....combed, brushed, and fed well for several years by our daughters and neighborhood friends. This gouache, in an antique oval frame, has resided on our bedroom wall for many years. 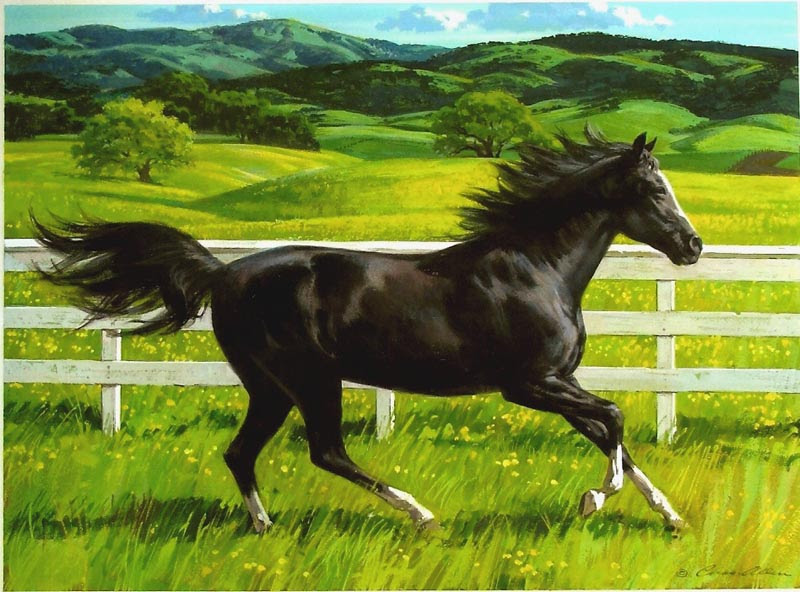 Horses seem to come in as many breeds, sizes, and differences as the canine world. Many we see are a mix called the American saddle horse....somewhat generic. These scans show the purer breeds....each 'designed' to do well for given events or purposes. The scenes were done from B&W photo reference of individual horses plus created locations. 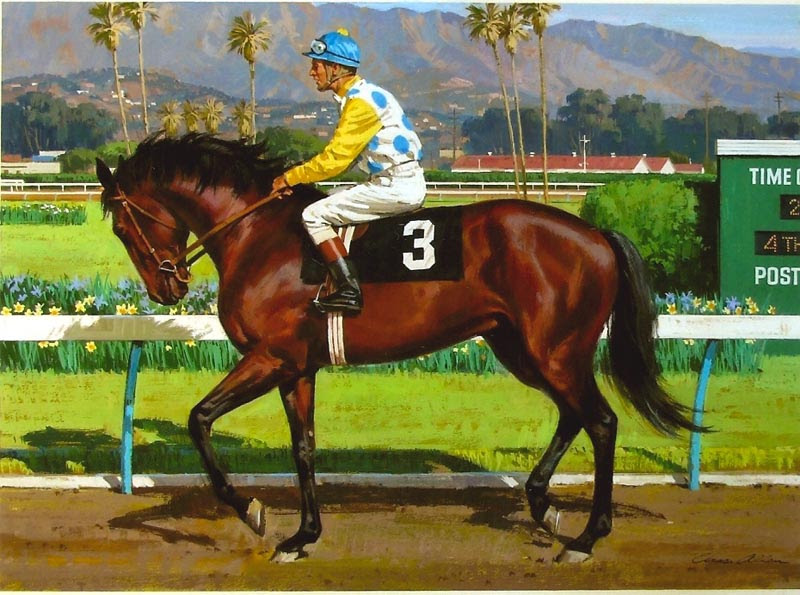 Black and white reference was actually preferable and offered freedom for color interpretation and composition. On the thoroughbred racing scene, I had a good shot of the horse, and separate shots of the modified Santa Anita track in southern California. The San Jacinto mountain range was in the background. The painting of the Morgan horse and the scene ( the English saddled and dressed rider) was made up, with the exception of the jumper....as were the fields and hills behind the corral fenced black Arabian. 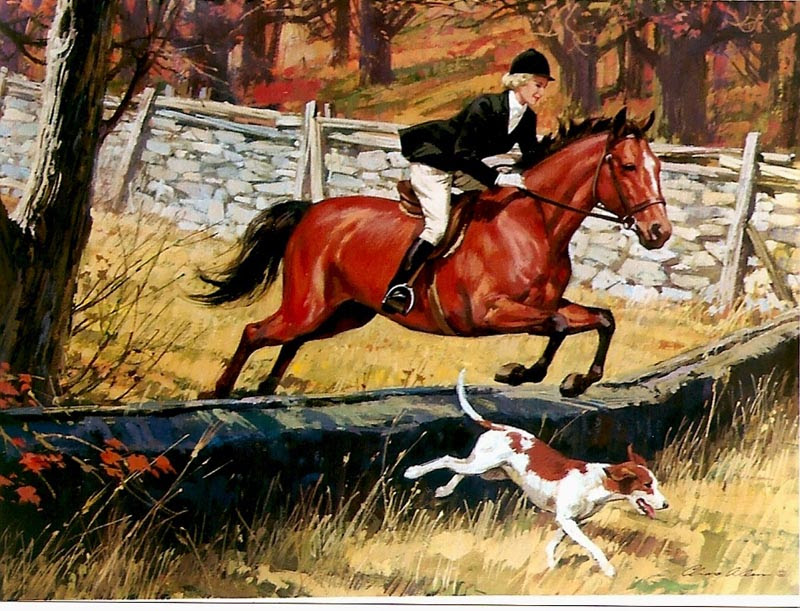 In the 1950's our fields and hills to the south of Walnut Creek were that pristine. Now, and sadly, mostly developed with streets and homes. The rodeo illustration was, again, from B&W reference. Had good reference on the Quarter Horse and calf roper....the buttes and hills were my idea of an Arizona location. 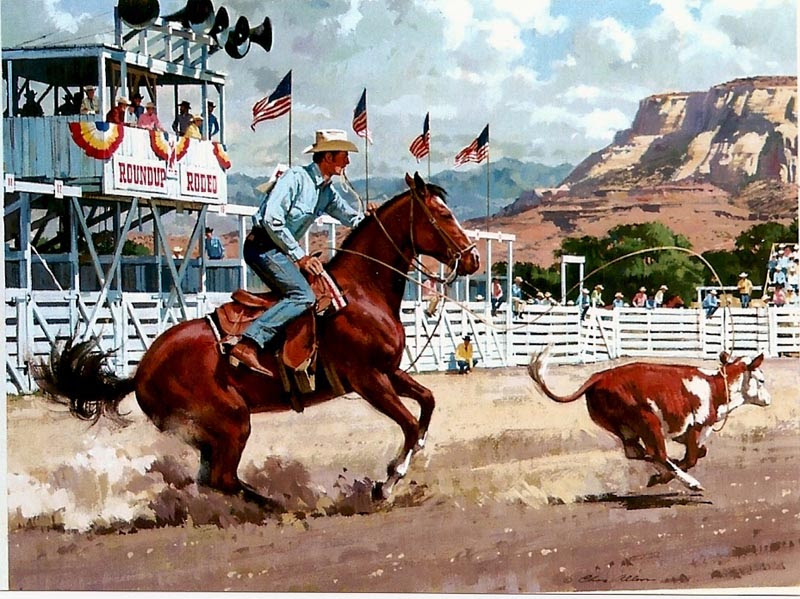 Next week, I have a hunch we'll pay a quick visit to Africa.

Wow...these are fantastic. I've been trying to get a handle on horses lately for a book I'm writing and illustrating.

Wow Charlie, These are great! Chet Patterson (Patterson & Hall) used to tell this old story of a potential client who came to the firm needing an illustration of a zebra. He had samples of some horse illustrations, but the guy wasn't convinced that an artist who could do a zebra, could also paint a horse, so he went elsewhere, only to return later when the other artist couldn't produce. Does that sound familiar?

BTW it's the San Gabriel mountains behind Santa Anita, although they are pretty burned up these days with the recent Station fire.

Thanks, Bruce....and Shane. I never did get those So. Calif. mountain ranges right. It seems that area, and many others in the state, have suffered greatly in recent years from fires. I think it's a combination of too many people populating remote wild areas....that and several years of severe drought. Don't recall the horse/zebra story....but could be. Clients, and even art directors, loved to 'type cast' artists....thinking they were limited to one or two kinds of work.