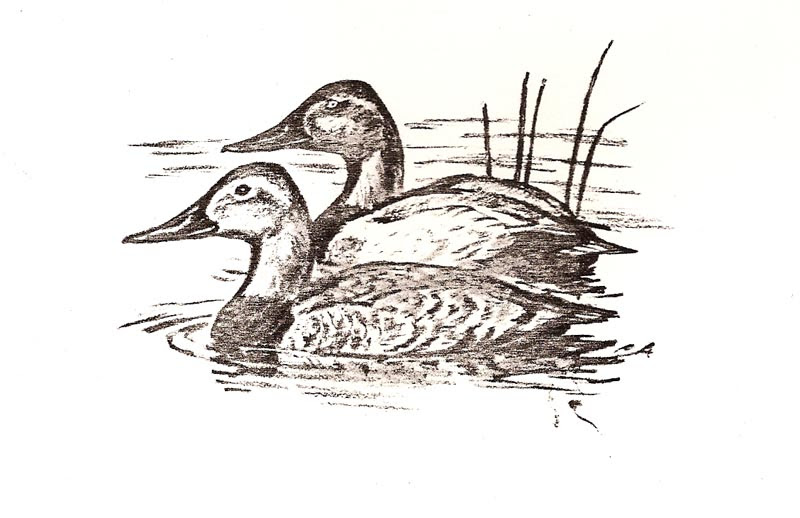 We'll deal with the above title at the end of this....nonsense indeed! Returning to last week's Colorado and Rhode Island duck stamp prints, coming along late in my illustration career. Those were published and sold by Steiner Prints in San Francisco. Bob Steiner is a good friend and a 'boomer' artist who, like many, arrived a bit too late for the advertising and editorial illustration world that was available when I started out. He was interested in the wildlife and duck stamp field....and with a lot of hard work and effort became a successful publisher as well as duck stamp and print artist. 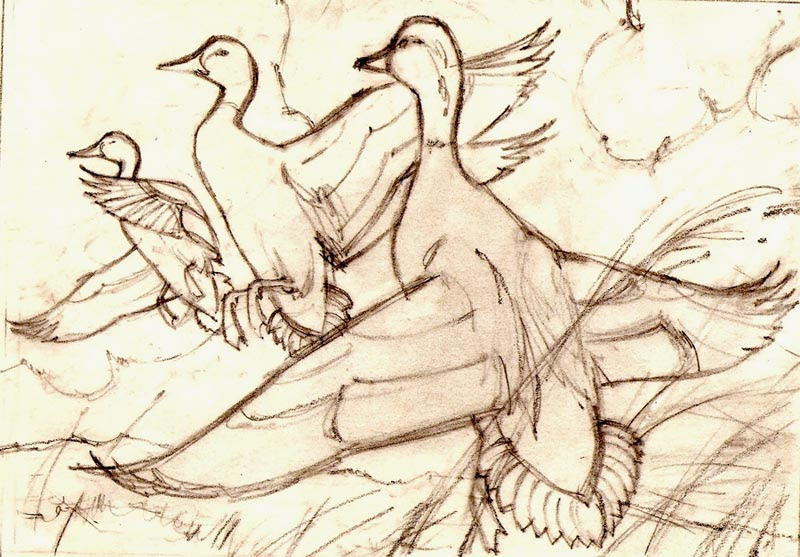 As mentioned last week the business had changed since the early 80's. Almost all states by the 90's had issued revenue stamps required of hunters. Duck stamps and prints multiplied exponentially....multiple states issuing new stamps each year. Result, multiple prints for sale. Soon the collectible phenomenon of the early 80's was a thing of the past....and even sales of the vaunted Federal duck stamp and print, around since the 30's, were greatly reduced. Colorado was the last 'real' competition that I entered and won....over 150 entries, as I recall, judged by a Colorado Dept. of Wildlife sponsored jury. Then, several years later, Steiner Prints invited several artists to submit entries for the Rhode Island competition. Several more entries came from the state. At that time commissions or royalties were greatly reduced....as well as fewer print sales in a small state. Following those, with an obviously old career, and with the exception of a few more commissioned paintings, that was the end of my duck stamp adventures. 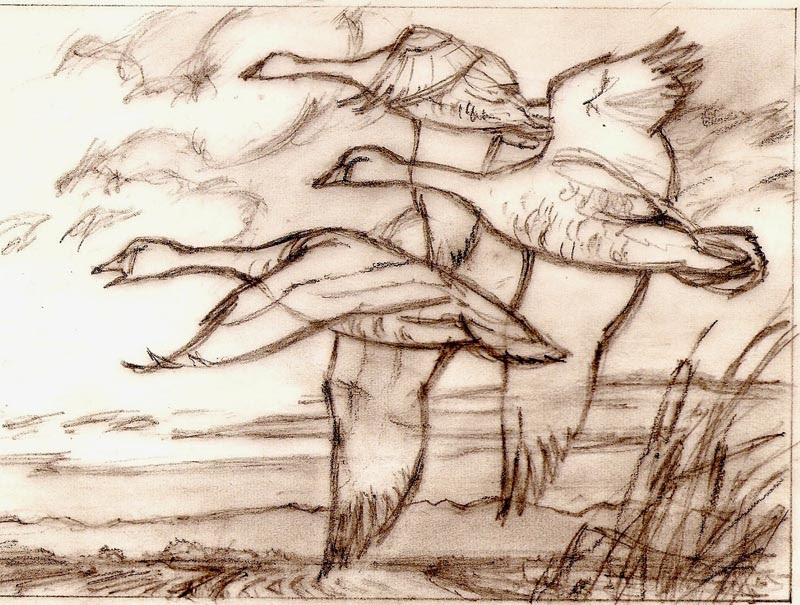 Before proceeding, the pencil sketches posted on these blogs were small comps done for two purposes....possible designs for duck stamp entries, or on most, an outline comp for remarques. Remarques were original color or pencil drawings done just below the print....ordered, for an added cost, by some collectors. Finally....we'll get to the color scans. First, two rough gouache comps, one of mallards... 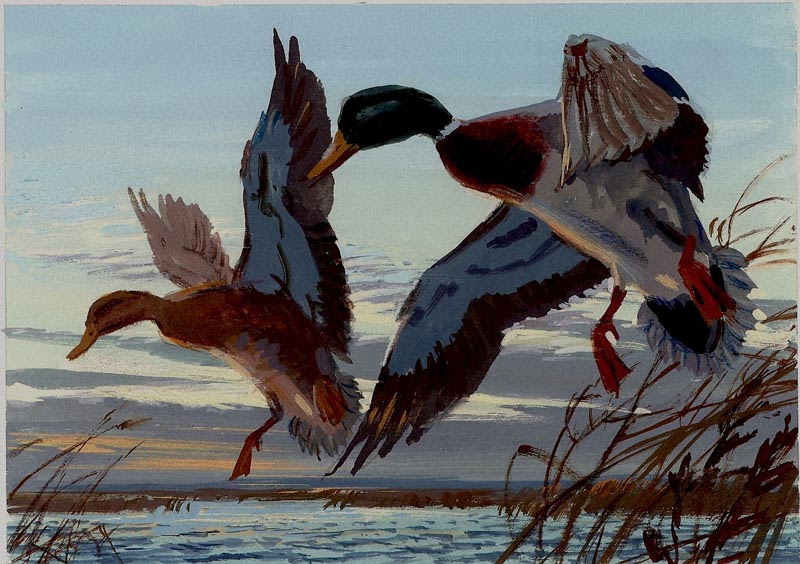 ... and the other of Canada geese, for duck stamp entries. I believe neither were finished or entered. 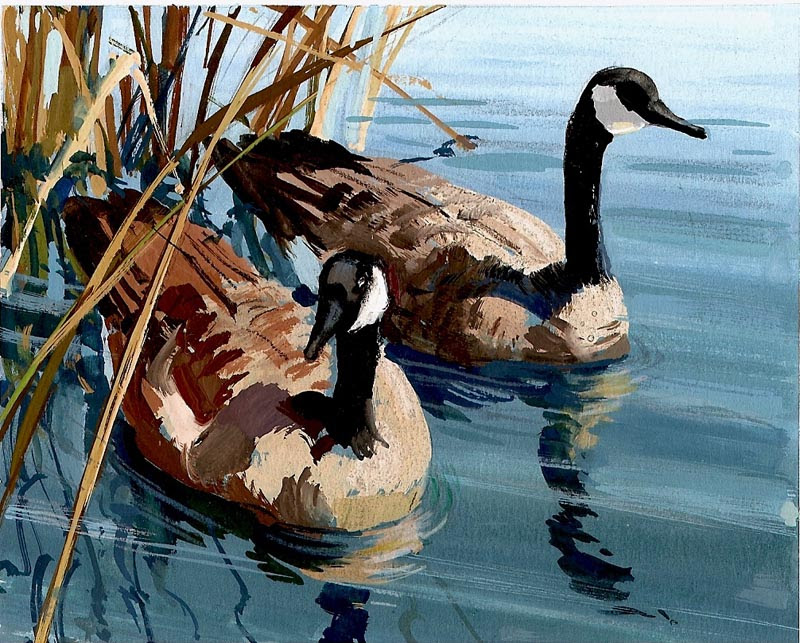 Then a full size entry for, as I recall, a South Carolina competition (it came in high, but no cigar), later framed and sold to a collector. 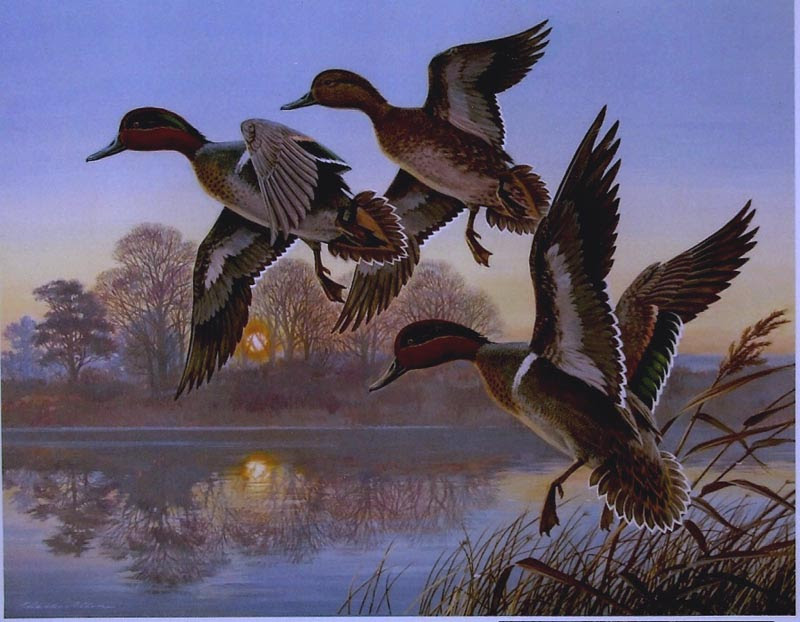 Then a color entry of redheads (ducks!) for a later Nevada competition....showing a typically chilly morning in the Fallon area. 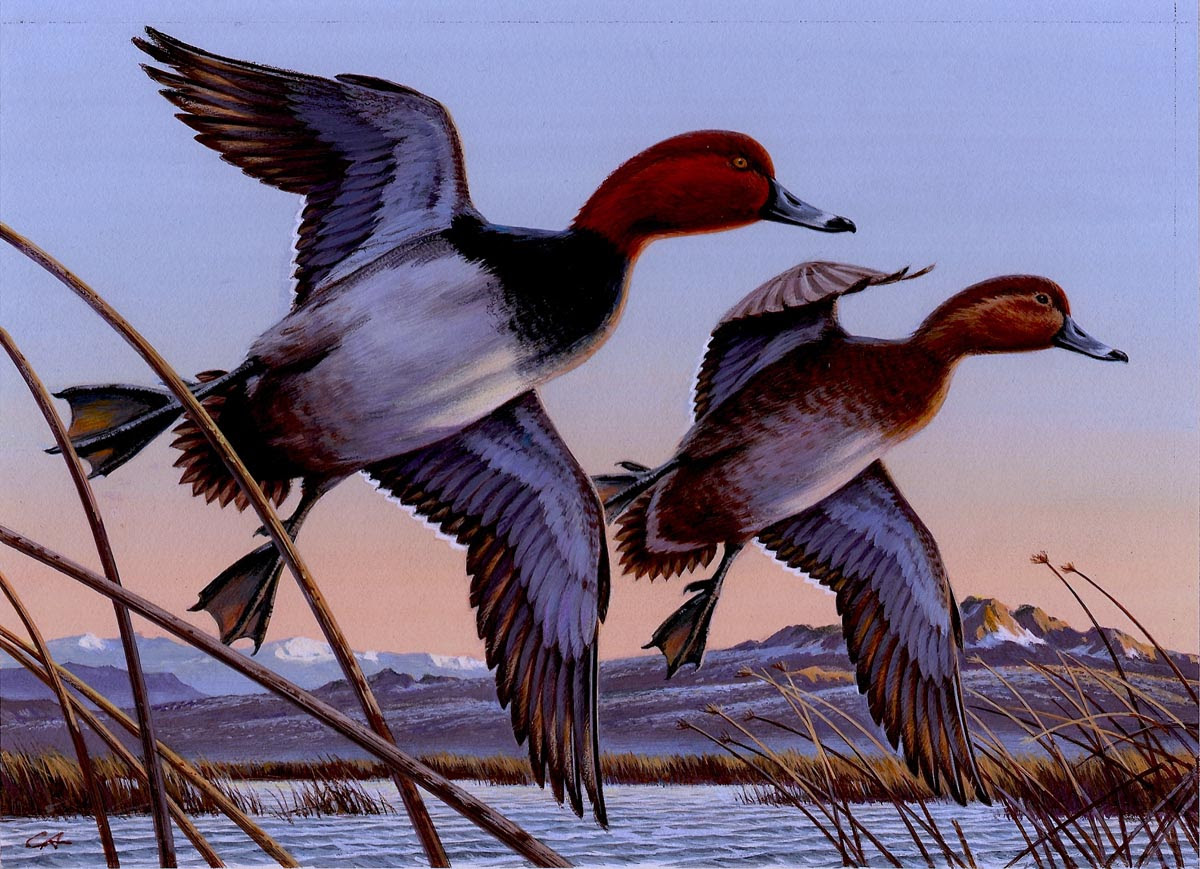 Last, a commissioned painting, a large acrylic on canvas, of a collector's hunting area on the Tejon Ranch in the Southern California mountains. He specified and provided camera shots of the particular lake and hills....in late summer! Instructions....show canvasbacks on a windy, stormy, day with a light snowfall....in December....usually good for canvasback duck hunting. 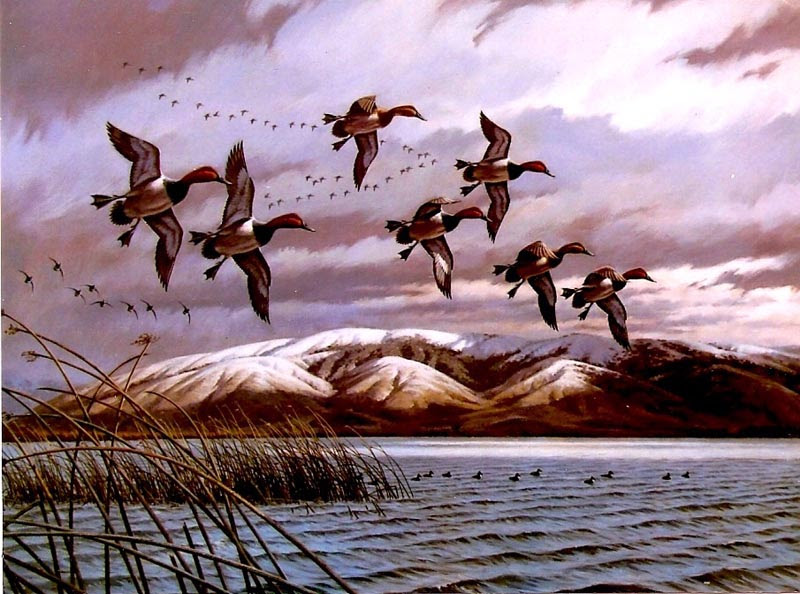 Because it's on the desktop, we'll end the duck stamp era blogs with a pencil comp....portraying three mallards landing in a rice field in the Sacramento Valley. It was an outline comp for a commissioned painting....a large acrylic on canvas. It was completed and delivered....but for some reason, no record of it now in color. 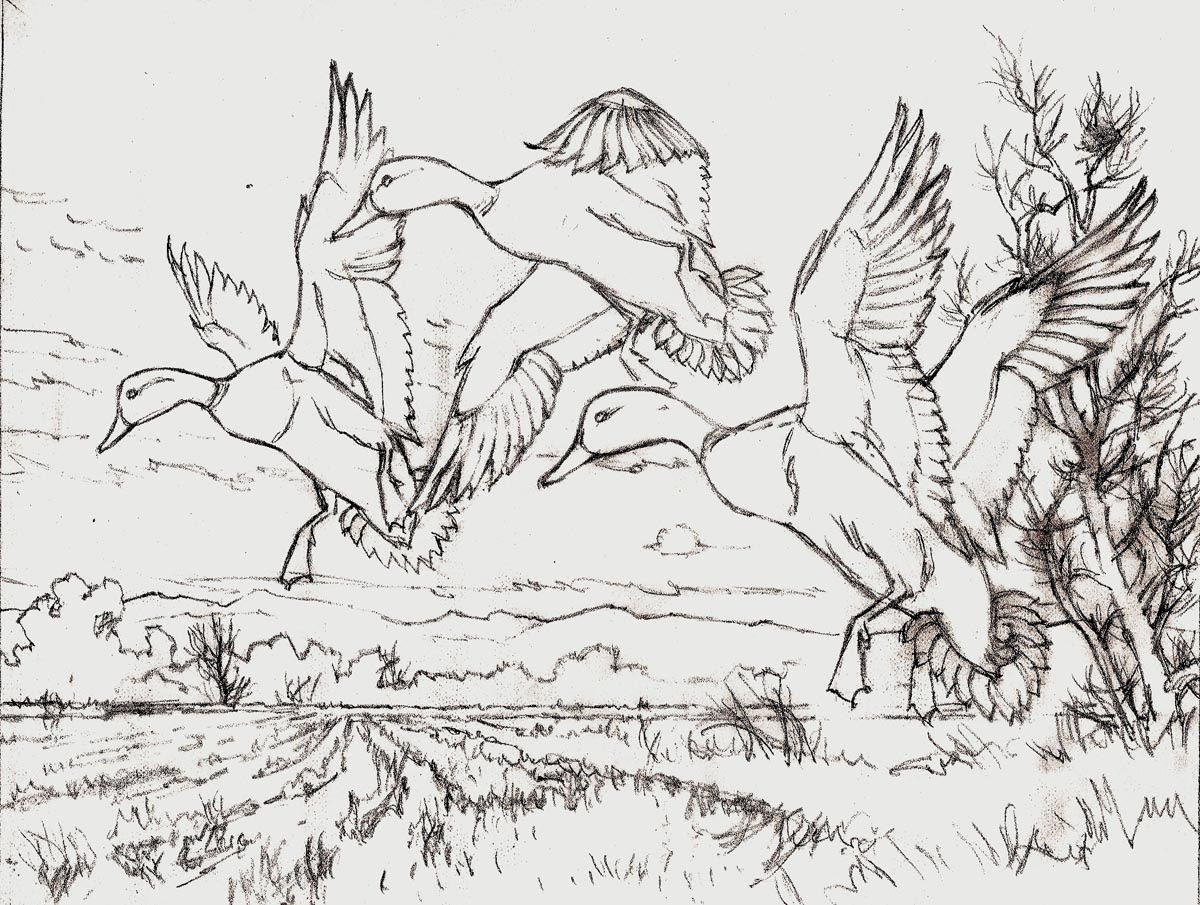 Oh yes.... the 'Blind Noncents' code! Should any viewers have the time or interest in providing an 'English translation' under comments, he or she will receive the exalted title (in keeping with our present administration) of 'Czar of Commenters'. Clue....two 'good ol' country boy' duck hunters, standing for hours in a cold blind with little or no action....a mild argument.

* Charlie Allen's Flickr set.
Posted by leifpeng at 8:31 AM

MR NOT DUCKS
'Em are not ducks!

By the way, I ALWAYS enjoy your writing. Thanks for taking the time to do it!

NESTER.....Haven't seen the comments on this until today. You're close, as in horseshoes. Not quite a ringer! First and second lines, right on. Third, 'Oh yes 'ay are ducks....see 'em wings?' Fourth goes,' hell I be! 'Em are ducks!' Fifth line, right on. No question....you, sir, are king of czars! Be kind to your subjects!

I recently came accross your blog and have been reading along. I thought I would leave my first comment. I dont know what to say except that I have enjoyed reading. Nice blog. I will keep visiting this blog very often.
Alisha
http://sketchingdrawing.com

Sir I have a huge love for the waterfowl life and love prints and drawings of waterfowl and I will say the way these are done is quite amazing love the way that are done keep up the amazing work sir. Nathan