'....OF SHOES AND SHIPS AND SEALING WAX, OF CABBAGES AND KINGS!'

I believe a quote by the 'Walrus' in Frank Baum's great classic, 'The Wizard of Oz'. Meaning here....maybe 'trivial' in most of our lives.... the subjects and product promotions of the huge advertising world. A very necessary part of commerce, of course....and though generally banal....advertising was, and still is, an important venue for writers, performers, and artists who might otherwise wither away!

Had a brief discussion with Leif this week....in which I labeled (not libeled!) one of the old time ad and editorial illustrators as 'square as a bear'. I think I'm qualified (I believe called 'street creds' in today's parlance) to make the square critique, being a prototype model myself. My work didn't loosen up until the 60's and 70's. After that, I retreated back into 'squaredom', as we shall soon see. This week's CAWS will post some 50's ads that will surely verify these musings on 'squareness'. 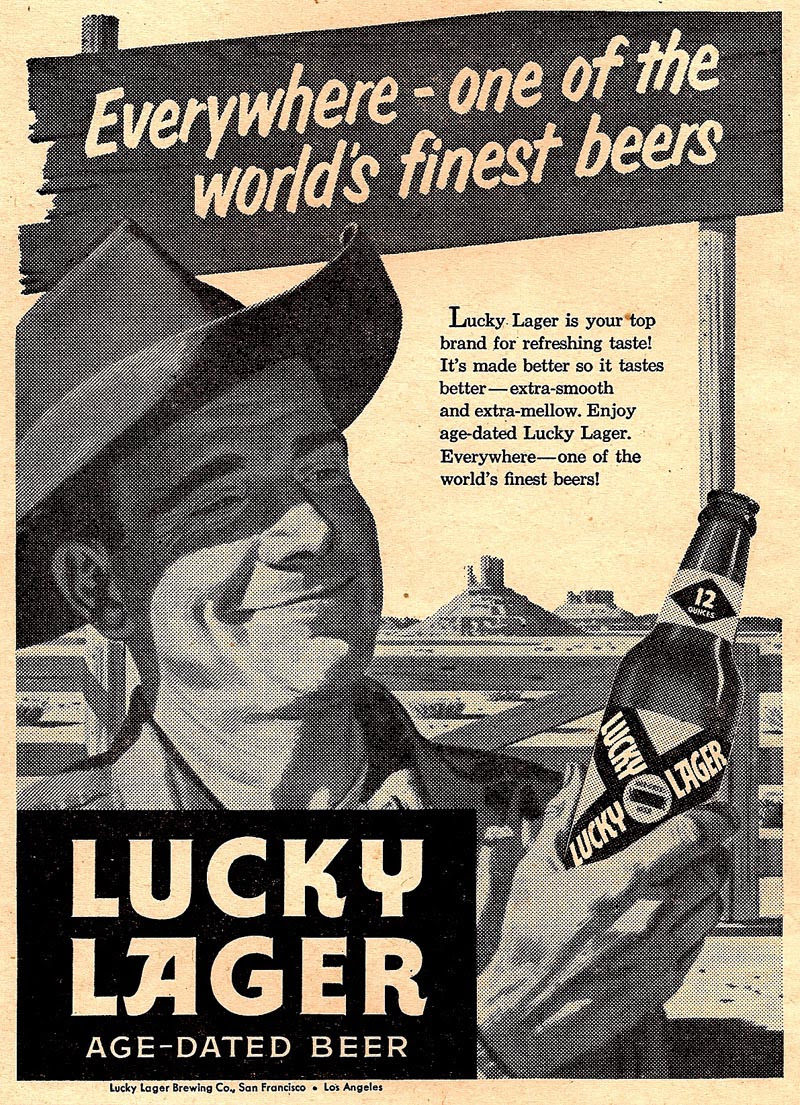 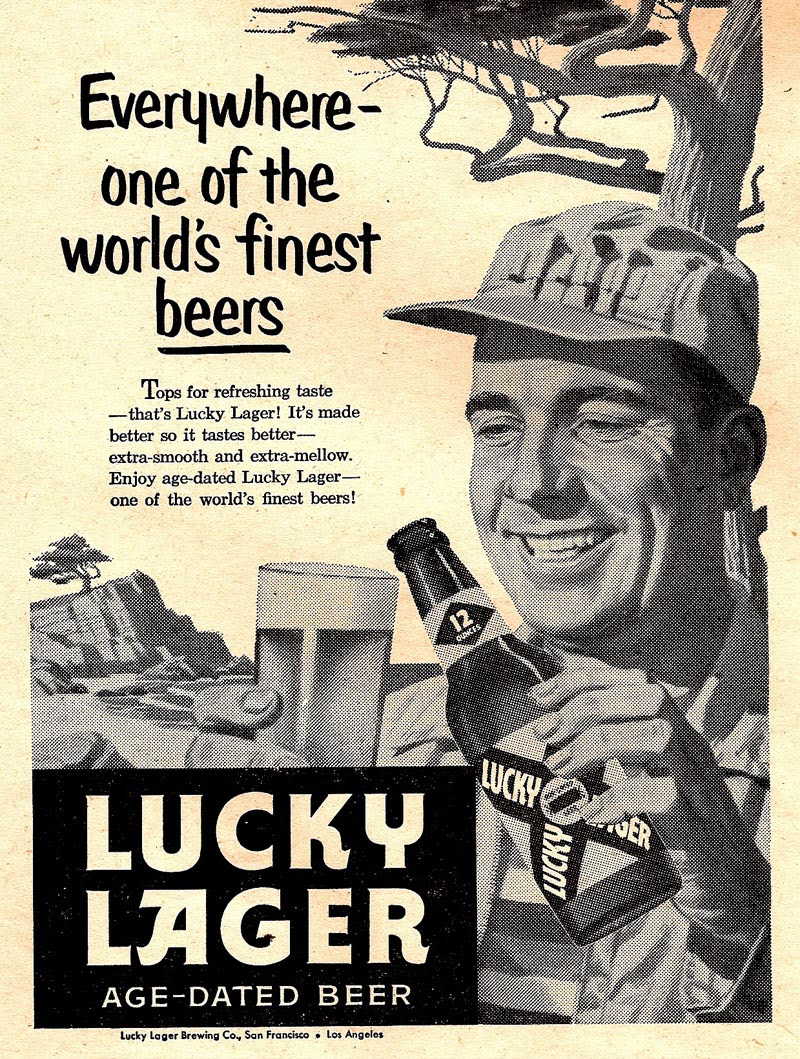 These were done in the Higgins ink wash technique that I preferred for halftones in those days. 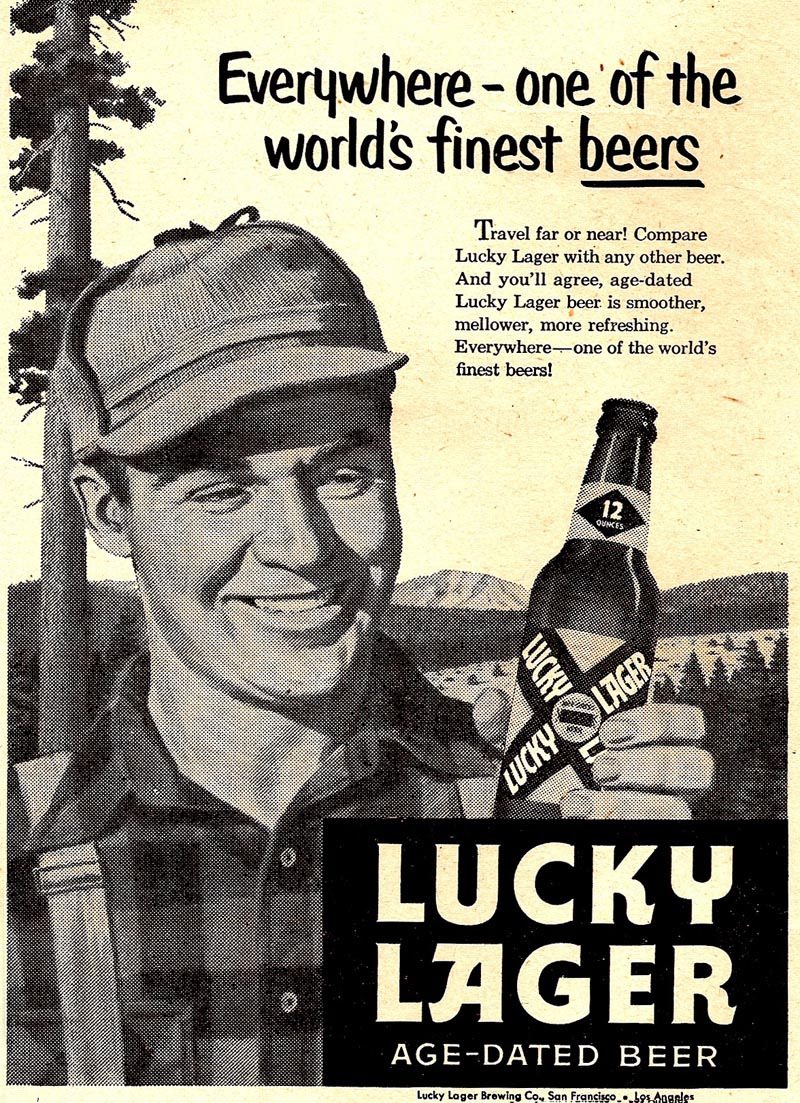 Very square....but that was the era for it. 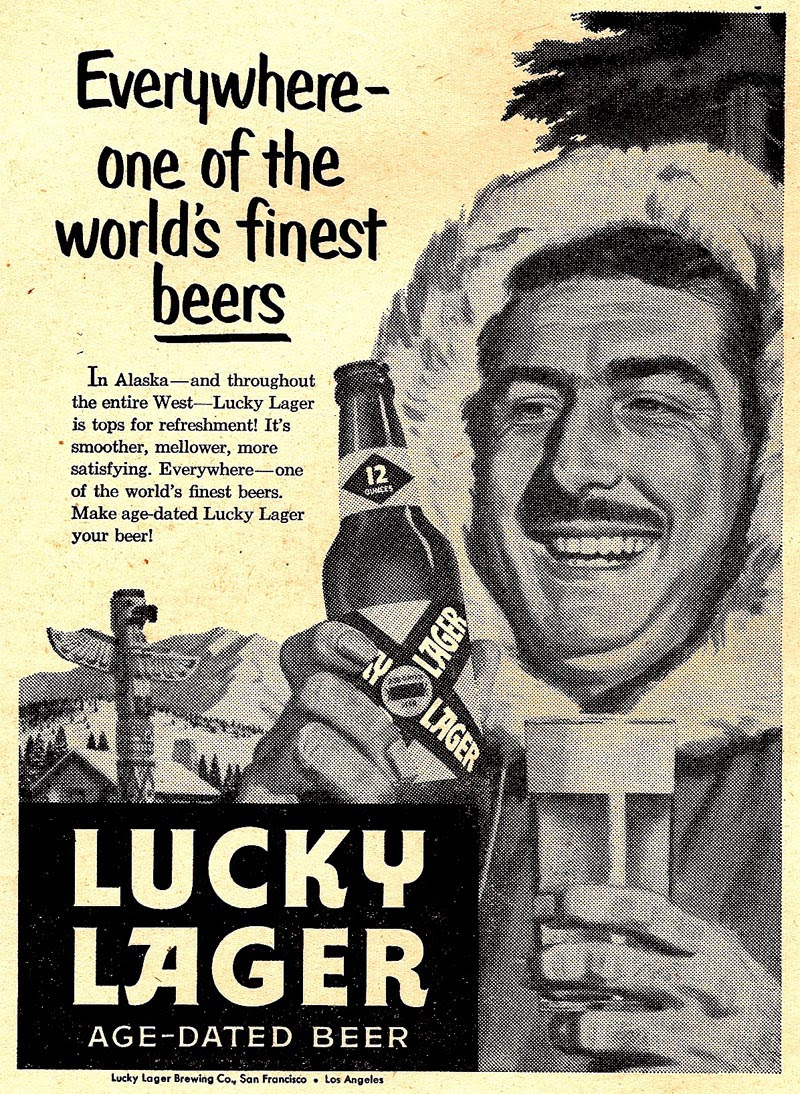 Then a B&W line illustration for 'Morris Plan', a good client in 1950 when the ad was done. Vintage clue....the black cradle phone. The illustration, square as it was, was another 'break through' B&W for a young illustrator....new and other clients were added from this. 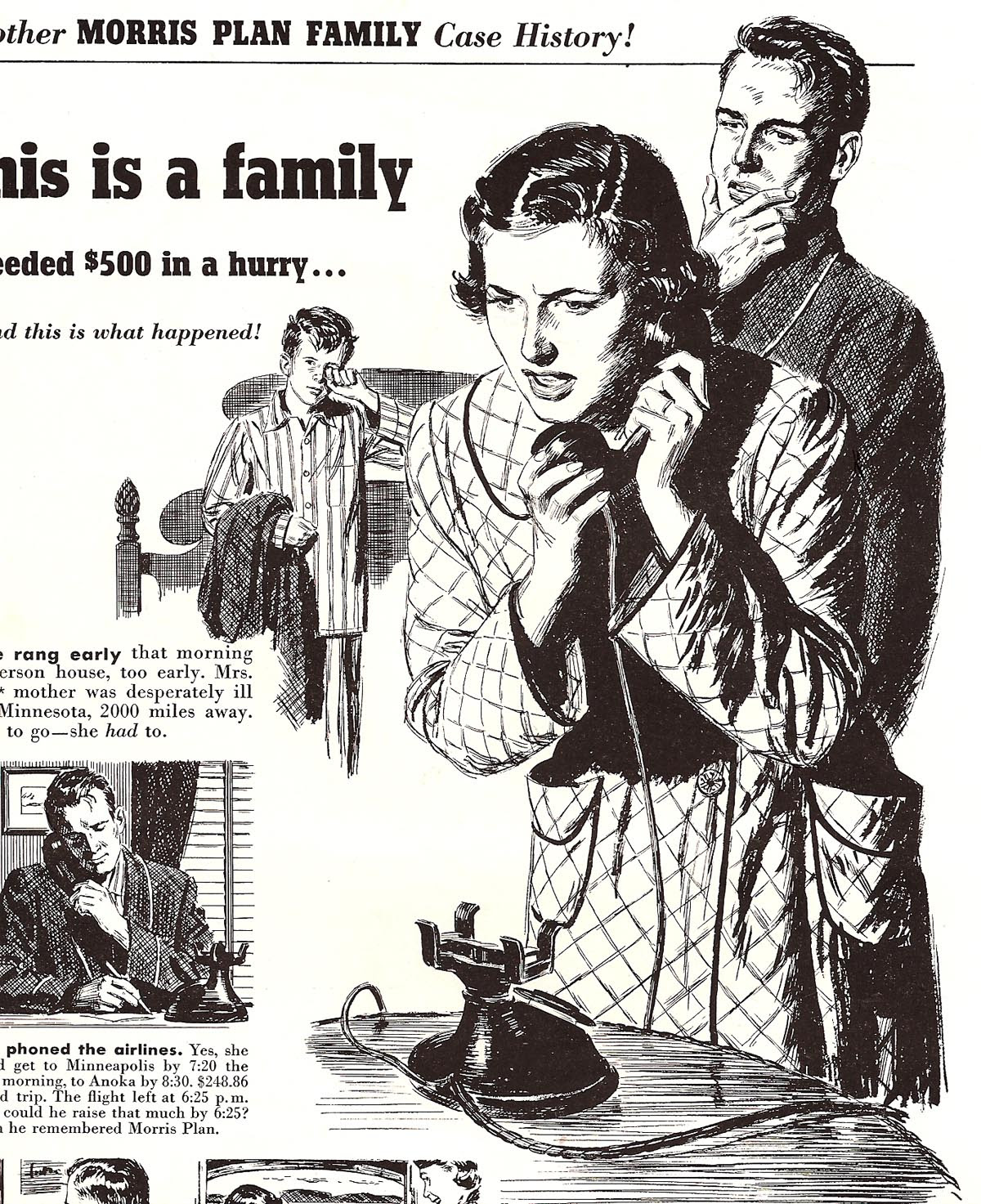 Following that, one of the early 50's line PG&E consumer ads trumpeting low electrical rates in California. No more! Pen and brush and ink, this one of the college town of Chico was scanned from an old newspaper clip. 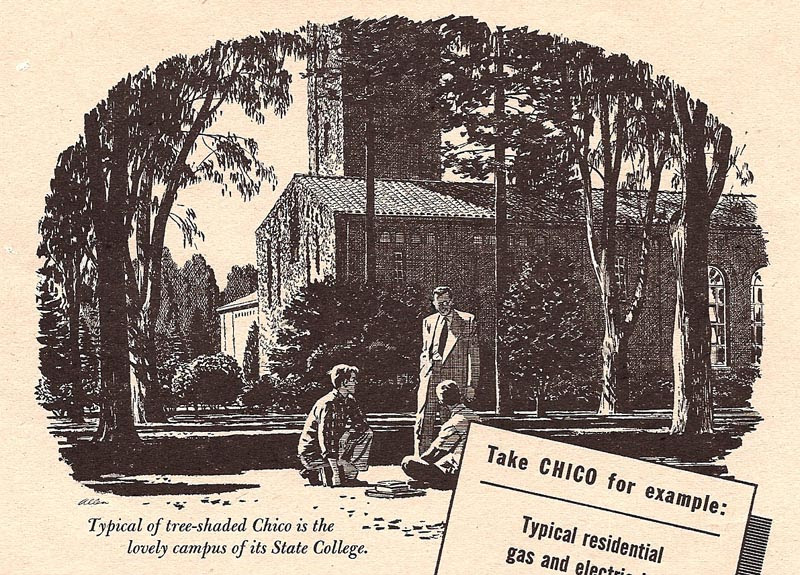 Next, one of the Potlatch Forests ads....a couple of those were posted earlier. This one on 'Presto Logs'....a very popular product in those days. The young model and her German short-haired pointer, and her parents, were good friends. 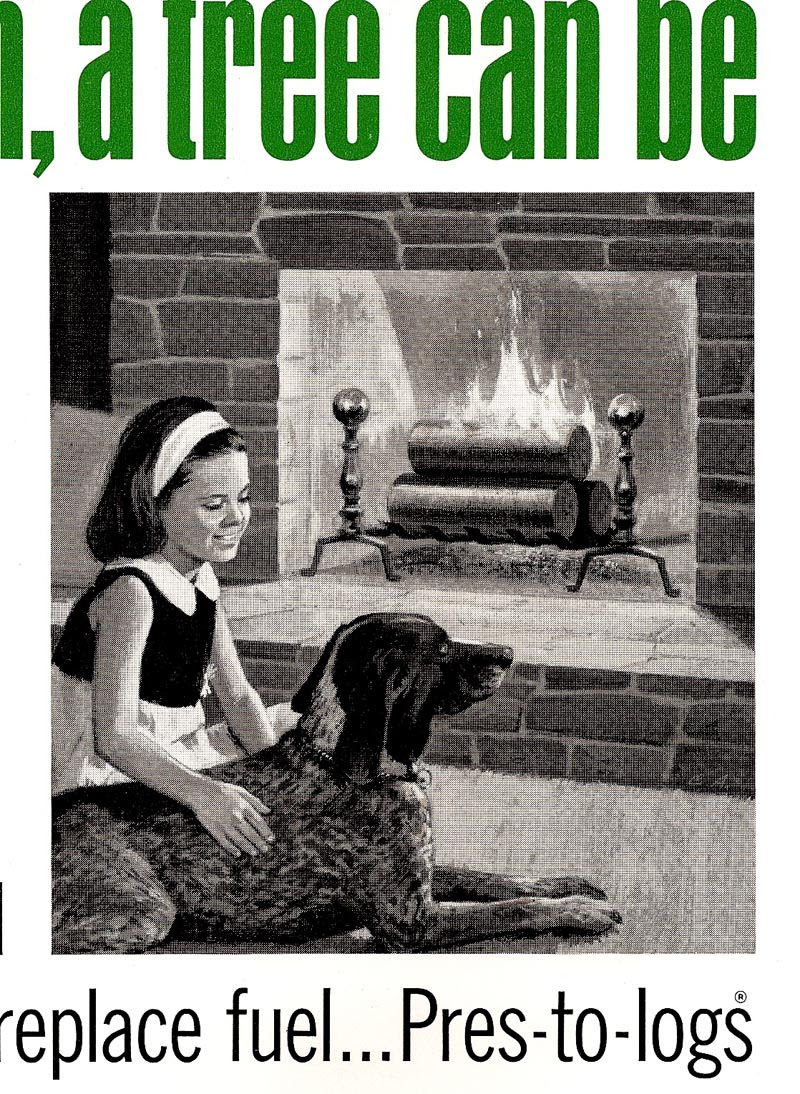 Last....a change of pace....and not sure this fits the 'square' category! Again from a yellowed news clip, a B&W line plus green cartoon illustration for Acme Beer....a seasonal 'bock beer'. My Webster describes 'Bock' as a traditional Bavarian dark beer, drunk in the early spring. Can we assume that after a cold, snowy, Bavarian winter, the dark brew had them feeling a bit like big-horn rams? 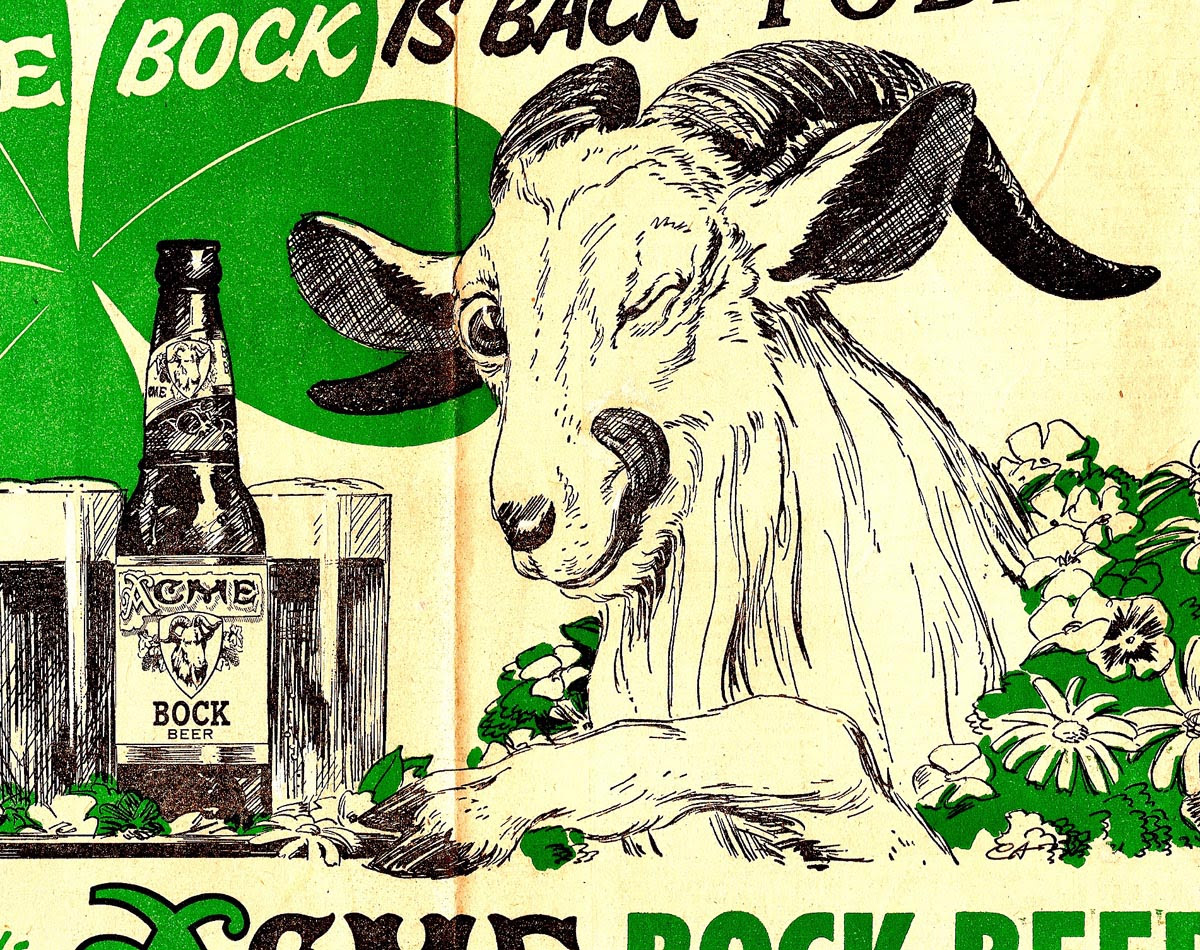 * Charlie Allen's Flickr set
Posted by leifpeng at 5:59 AM

Great site - thanks for all your work on this. I love these old pictures.

Soooooooooooo, you're the dude, Charlie, that warped me wittle mind with the zine art, ehh?

BTW: Methinks that was the "Alice In Wonderland" walrus.

Charlie, good to see those "square" 50's renderings. I was taught that you first need to know how to do the "square" stuff before moving into the "round".. or something like that. ;-) Seems like all the inventive loose and clever direction, didn't save the illustration market from fading away through the 60's and 70's.. and beyond. The theory was that as illustrators, we needed to do something the camera couldn't do. Well, a camera can't and never could do what the human mind can do, and that is to think! A camera is one eye and no brain! I like what your brain did with those illustrations you scanned,
Charlie. ;-)

No criticism of photographers intended,

Boy, oh boy.....Will probably misquote again: Prof. Henry Higgins in 'My Fair Lady' sang about 'letting a woman in your life'....'their minds are filled with cotton, hay and rags!' (sexist, but that was the point). Cotton and hay were in my mind on the blog. Tor Hershman is so correct....the quote and the 'Walrus' were from Lewis Carroll's 'Alice in Wonderland....not Baum's 'Wizard of Oz". Old age is just a barrel of fun! Tom, right on. Some musician said, 'you have to master the fundamentals before can improvise'. It's pretty true in illustration as well.

Not to be a 'control freak', as I'm sometimes accused of around here, let me quote the 'title' a bit more fully....one that I enjoyed as a youngster. 'The time has come, the Walrus said, to talk of many things....of shoes and ships and sealing wax, and of cabbages and kings. And why the sea is boiling hot, and whether pigs have wings!' Sounds like today's political discussions!

Charlie,more great work.But a couple of questions if you have the time: You have shown us a tremendous amount of very high quality art over the months (for which many thanks) as a rough percentage how much would have been based on photographic source material? and did you have to serve a long apprenticeship till you got your chance to fly,so to speak? Thank you.

I think the "square" look was not only appropriate for the time but also for Lucky Lager's brand.

The illustration style you used fits very well with the Lucky Lager logo.

Thanks for posting your work. I visit often without commenting.

Chad, a late reply. Early on, all of the billboards and most figure illustrations required good photo reference. Later, in the 60's and 70's, I shut down the home 'photo lab' (our utility room), pretty much got rid of the trays, drying sheets, etc. and hardly ever used the old Speed Graphic. Poloroid, and just out of head drawing sufficed. No apprentice type work....although pre-war I worked for a Fresno ad agency for three months....good experience. Post war, I worked for the Fresno Bee newspaper for nearly a year....more experience. In S.F. I was thrust into ads really over my head....forced learning curve....and luckily survived!