'WHILE TEARING OFF...A GAME OF GOLF

I MAY MAKE A PLAY FOR THE CADDY....
BUT IF I DO....I DON'T FOLLOW THROUGH
'CAUSE MY HEART BELONGS TO DADDY!'

Song and lyrics by the famous composer, Cole Porter, first performed on Broadway by Mary Martin back in 1938....way back when lyrics were clever, coherent, and had a sense of humor. Golf is the subject this week, however, not music. Chet Patterson, who headed up P&H, was athletic and always an enthusiastic golfer. With a low handicap, he was match play champ at Meadow Wood, his Marin County golf club, as well as a winner in other tournaments. I think his competitive WWll fighter pilot 'nerves of steel' served him well in golf. Chet had friends and contacts with the PGA, and for about four years in the 70's, P&H produced a tournament golf magazine for several major PGA events. Published by the PGA, these had well written articles and ads, very much like consumer golf magazines. I illustrated the covers in 1975, '77 and '78....not sure what occurred in 1976. This week's CAWS will post a couple of the cover illustrations and a few inside illustrations. I always welcomed a change, and these came as near editorial illustration as I ventured. Will again mention the excellent page designs and teamwork with P&H artists....in this case, mainly Jack Martin, but others as well. Next week another CAWS on golf....a few still to go.

As said, the 70's were a time of change in illustratiom. There seemed to be no hard and fast techniques or styles....and most of these were my adaptations to that era. First, the 1975 Players Tournament cover. The original had Jack Nicklaus's hands above his shoulder, the golf club slanting down behind, making for a strong design element and action. For some reason I was told to remove the hands and club. I did....the paycheck mattered! I still have the original art....have meant to repaint the hands and club, but have never gotten around to it. The golfers were rendered in pastel pencil and gouache. In order from the top, Miller, Palmer, Trevino, Weiskopf, Player, Snead, Geiberger, and Nicklaus. 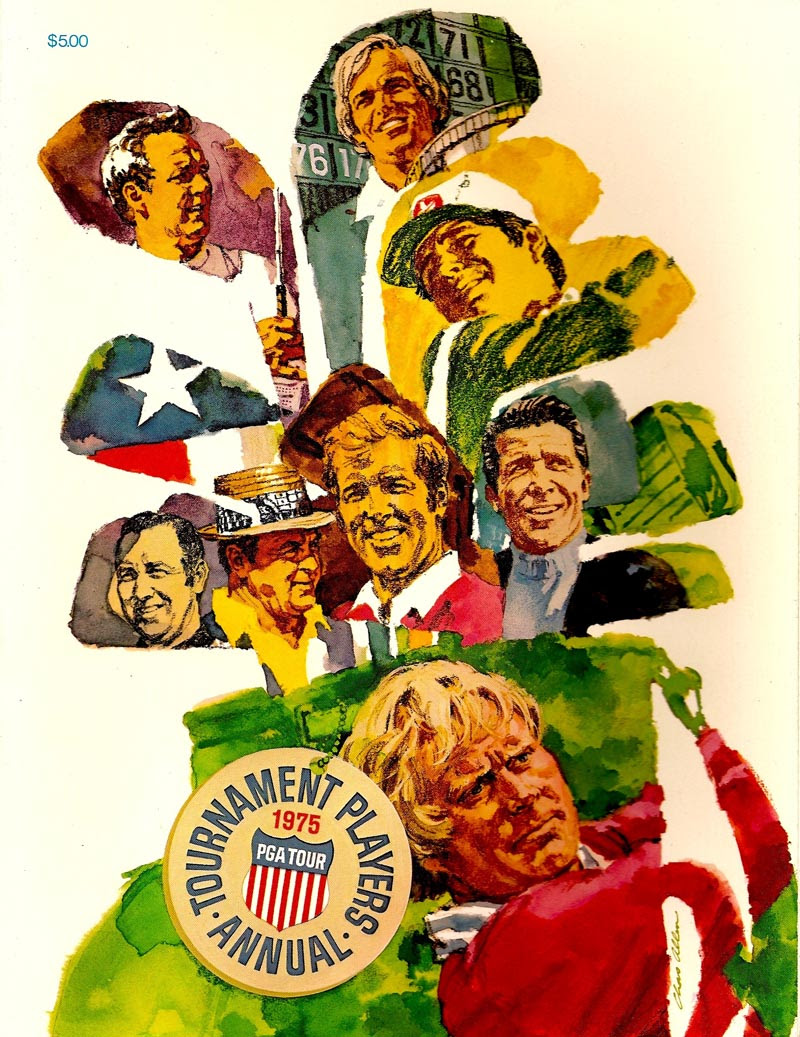 Next, the '77 cover featuring Johnny Miller, Hubert Green, and Jerry Pate. For better or worse, the cover designs were mine. 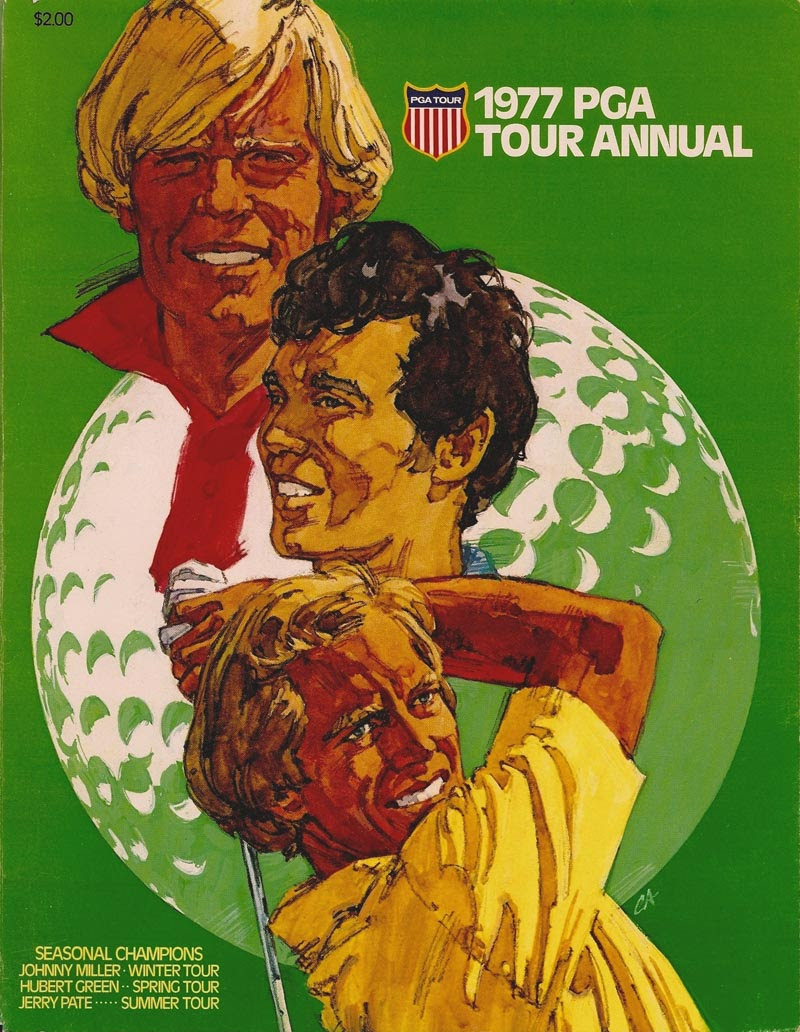 Then for an inside article, two of Lee Trevino. 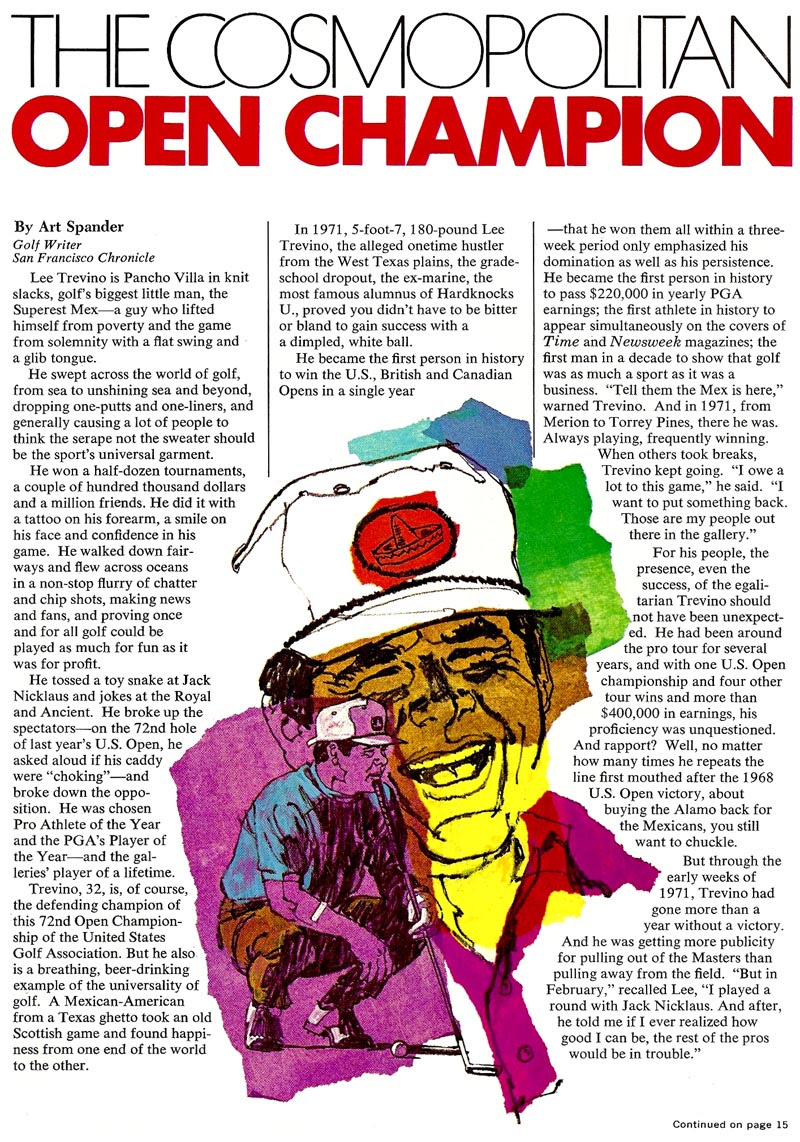 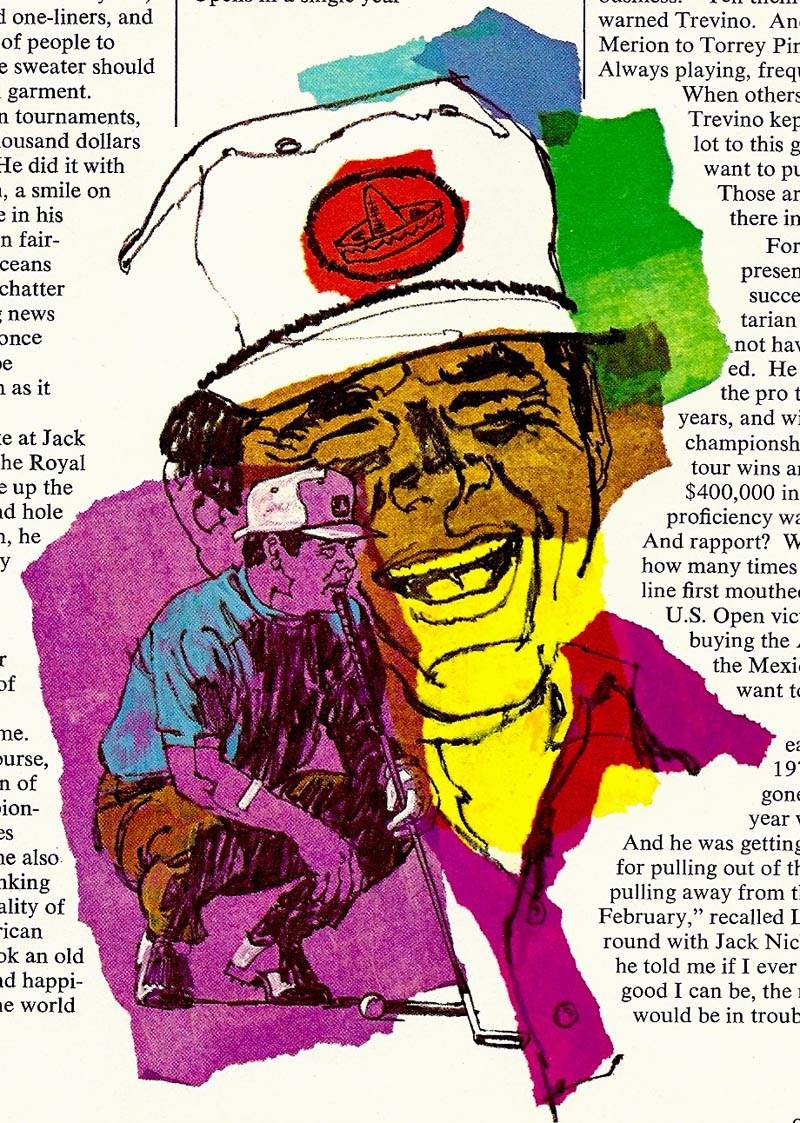 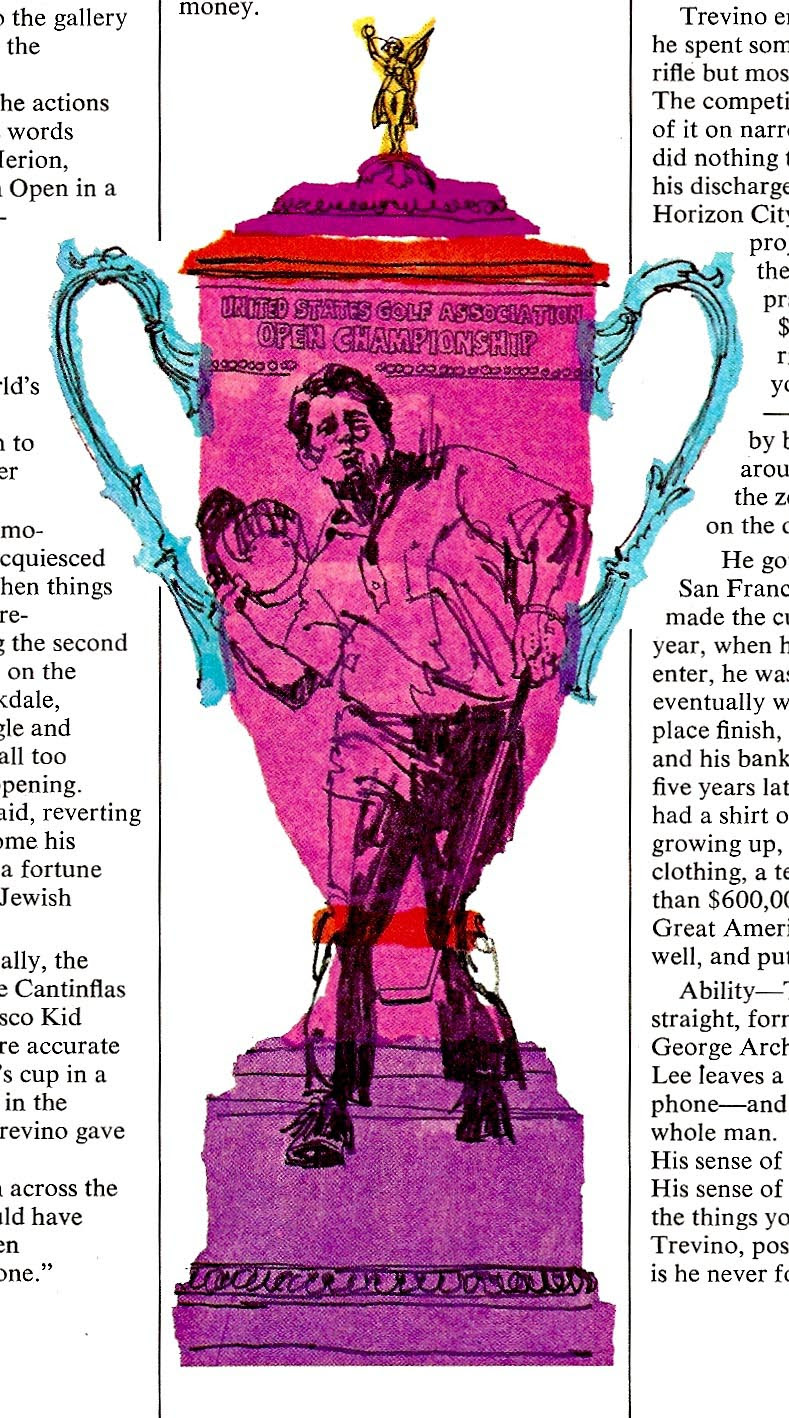 Next from an article on professional caddies, a line and gouache rendition of a caddy... 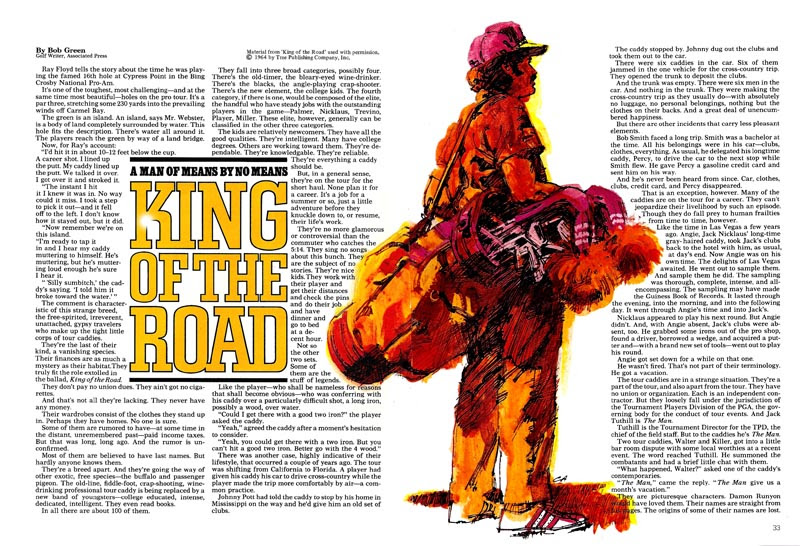 ...and following, the next page showing photos of a few of them. 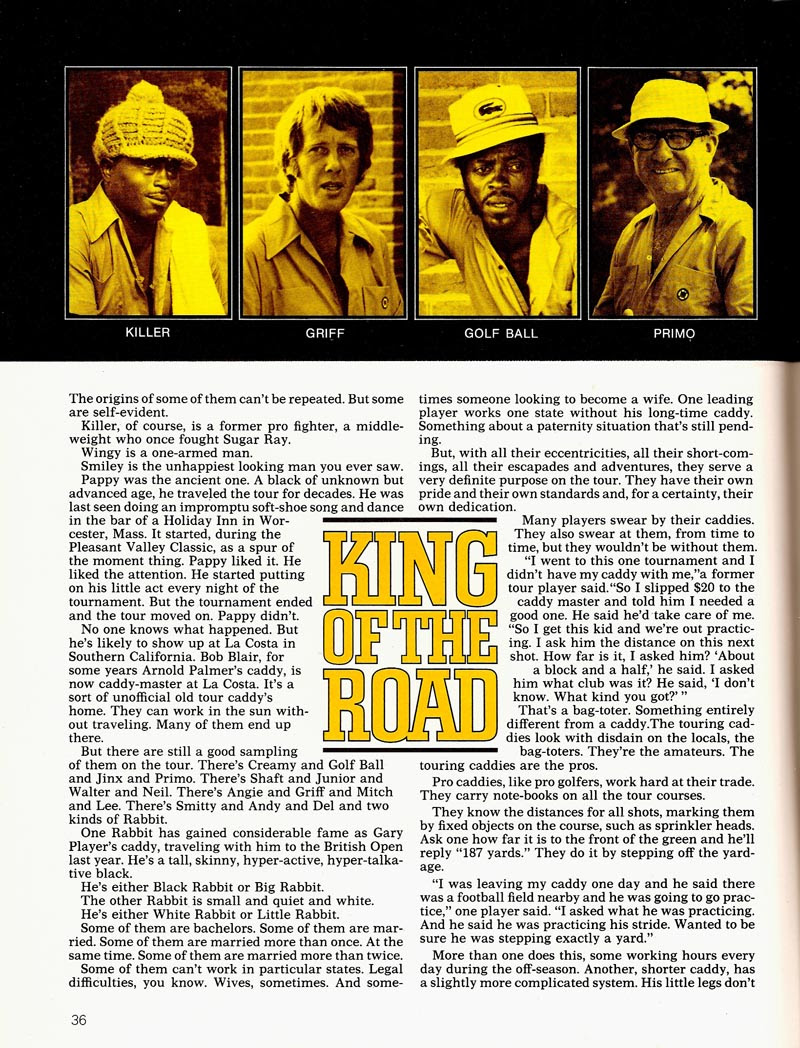 After that, not my work, but a page by one of our decorative artists (can't recall who)....showing a nice variety of editorial illustration. 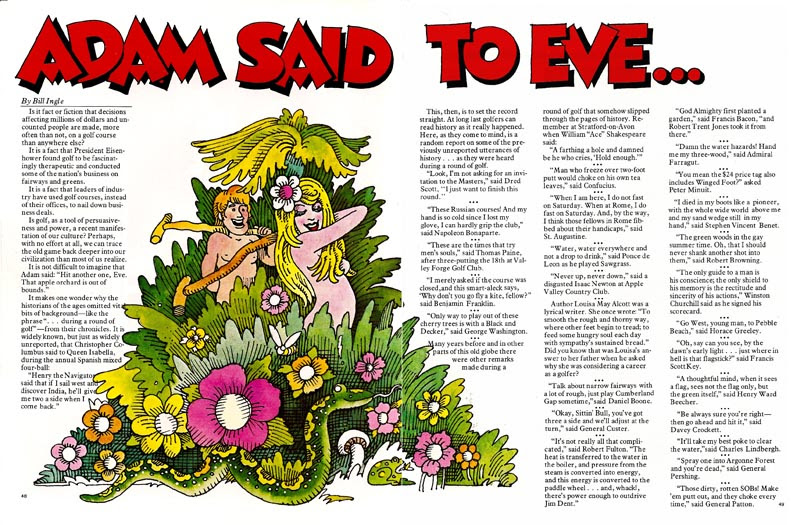 Finally, and admittedly doing a stretch on this blog, a four by nine inch pamphlet for an S.F. mutual fund. A charcoal pencil montage. It does have a golfer in it!

* Charlie Allen's Flickr set
Posted by leifpeng at 10:07 AM

How the hell did we get into a situation where Art Directors would rather use photos than fantastic illustrations like these? I can't stand golf but I'd definitely pick up a magazine on this subject if it had such vibrant artwork on the cover.Well done Charlie, outstanding work,

I completely agree. There's a reason that websites are sprouting up everywhere and design in general is leaning back towards the hand-made aesthetic. Digital work is fine, but it's cold - with little indication of the particular artist's "hand". Plus, a lot of ADs don't know what the hell they're talking about.

Anyway, another great set, Charlie! I really like your linear charcoal work - and added with the vibrant, abstract 70s colors, it's pretty amazing stuff!

Sorry to post again here, but do you have originals or prints for sale anywhere? Having even a postage size CA original framed on my wall would be amazing!

Hi Charlie,
Great stuff again.
I think the Adam and Eve illustration was by Steve Hall. For you illustration fans: Steve was P&H partner Tom Hall's brother, and the son of Haines Hall. He had a very graphic style that fit the era very well. Did a lot of winery posters.

You're right, Bruce....Steve Hall's Adam & Eve. He usually signed or initialed his work. A great decorative artist....did some fantastic space posters for Safeway. Matt, at this age and stage, would rather not get involved with prints or copies. I did put a toe in the 'print waters' back in the 70's....of antique cars. Then did four state limited edition duck stamp prints in the 80's. I'll have blogs about those before long. No prints of ad work, however, which to me are more interesting. Thanks for asking.

The stuff you are writing blows out my mind.
free golf games

Really informative in succession and while all the analysis I have feel that this blog is really great written all those quality that qualify a blog to be an excellent.

Thanks to share these details it’s truly nice.
free slots

I am so glad this internet thing works and your article really helped me. Might take you up on that home advice you gave. Perhaps a guest appearance would be good.
online education in india

This is a really good post. Must admit that you are amongst the best bloggers I have read. Thanks for posting this informative article.
xlri hrm

I'd rather prefer this game instead of golf. Here, even free bonuses are.

Playing your preferred club game is substantially more fun and advantageous when it is delighted in at home in your night wear! Online hyper casino make this conceivable, and are gradually defeating area based gambling clubs in prevalence.