'WHERE ARE THE CLOWNS?'

Well....many are right here in the California State Legislature....and a whole passel more are our elected representatives and senators in the U.S. Congress. And, I might add, are about as sad in performance and demeanor as this weeks' first scan of an Art Center model back in 1947. This was from an illustration class....the difference....he was a real McCoy clown. 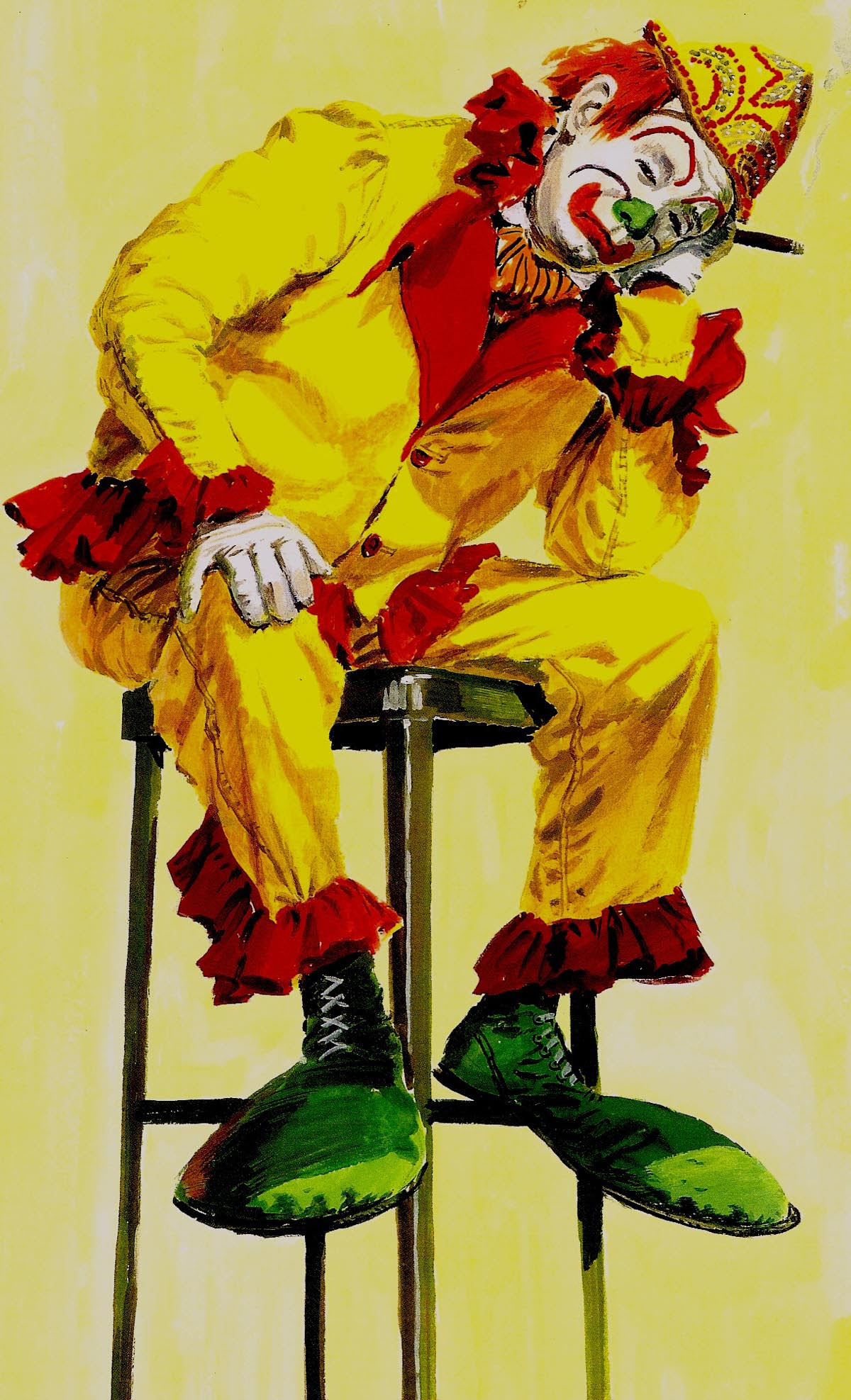 Before proceeding, however, the above lyric title line is from the fine show and popular song composed by Stephen Sondheim, 'Send In The Clowns'. The Broadway musical was called, I believe, 'A Little Night Music', and here recommended if available on DVD or otherwise.

The posed clown study was done in an illustration class, a one half or all day pose, and one of the early gouache illustrations I had tried. The school was fortunate to be located fairly near Hollywood....and in those days there were numerous 'extras' and characters from the film industry available for a days' modeling job at Art Center. Following that, a gouache cartoon done about the same time.

The illustration assignment....portray a person or persons succeeding in spite of difficult or dangerous conditions. I was too busy at the time to try a 'cliffhanger' or serious illustration attempt....so took the easier road with the cartoon. The instructor was not all that pleased, as I recall, but it got the assignment done.

Still going back to 'roots', a small southern California magazine, 'Western Family', used illustrated covers. I made a sketch for this while at Art Center and did the speculative illustration during 1948, my first year at Patterson and Hall. The magazine accepted it....and I was paid the grand amount of $75 for the design. Considering the post-war economy, that was almost to be expected from a publication of that kind. 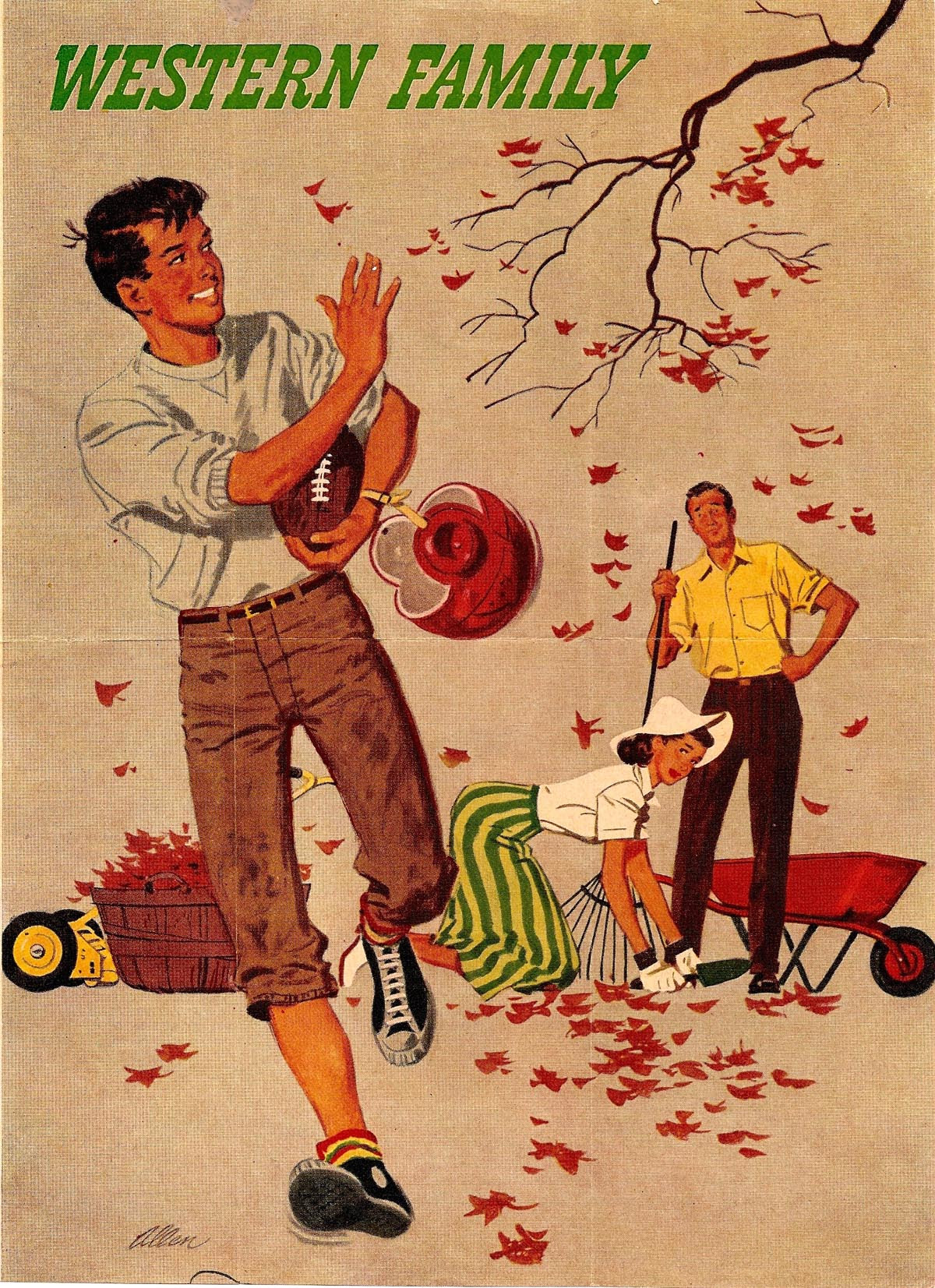 Next, several years later in the 50's, a 'sample' painted during 'down' time....ergo, a slow period. I had clipped a small B&W photo of the glass carriers from a magazine. It fascinated me....and the men were almost as interesting in character as shown in the illustration. I placed them in an industrial setting in color and loosened up....this was the result. 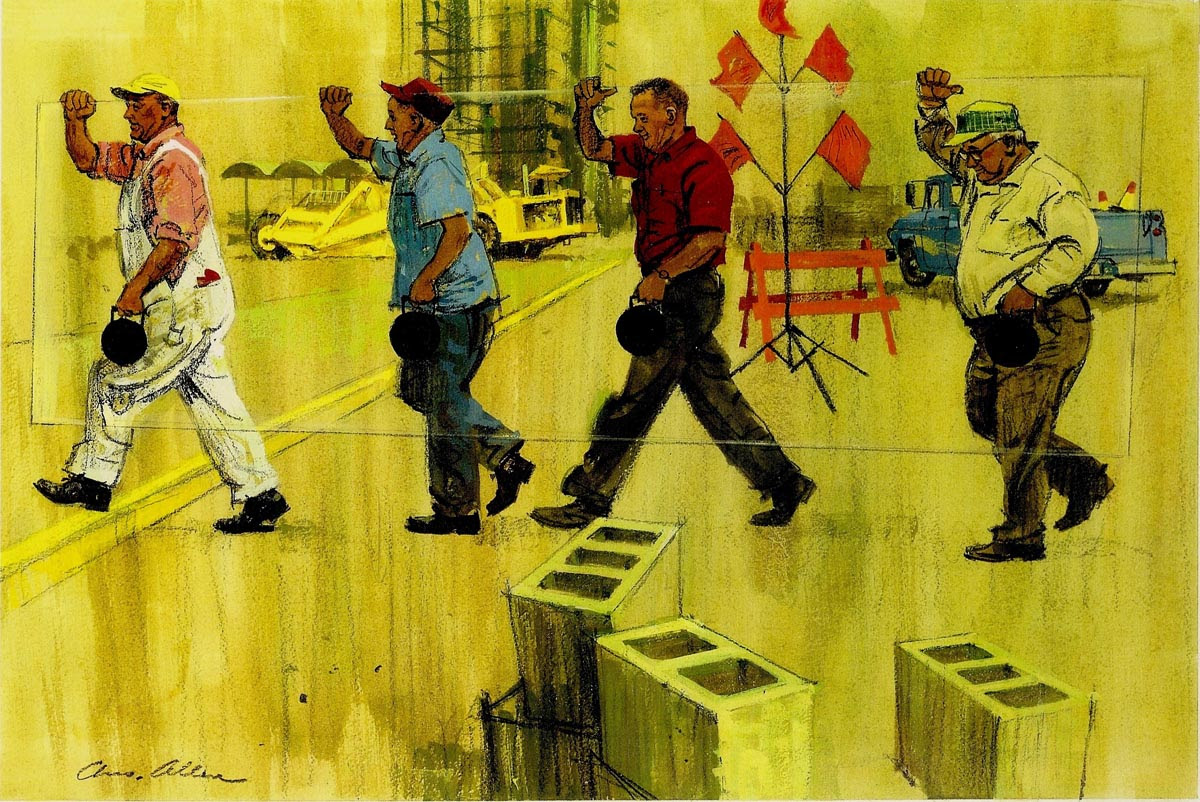 Finally, four small rough concept comps done in the 50's, as a start toward better comps. 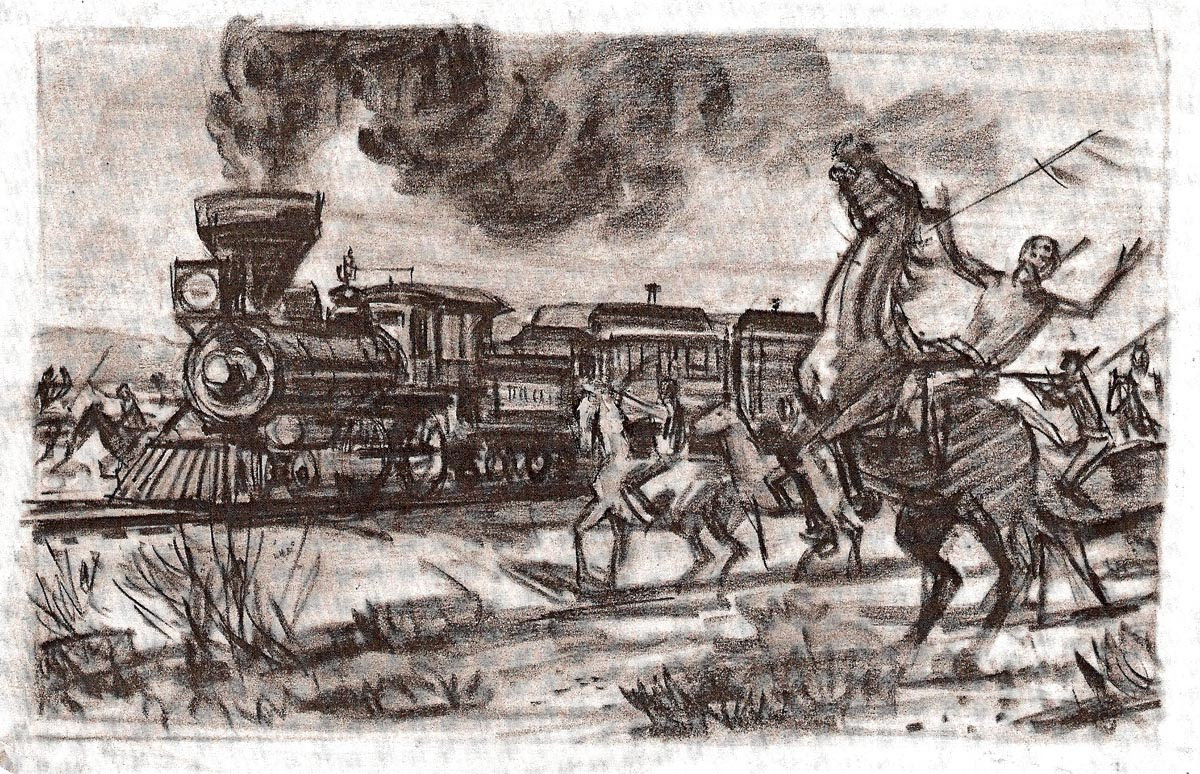 Again, during a slow period....the purpose, a 'western' calendar theme. 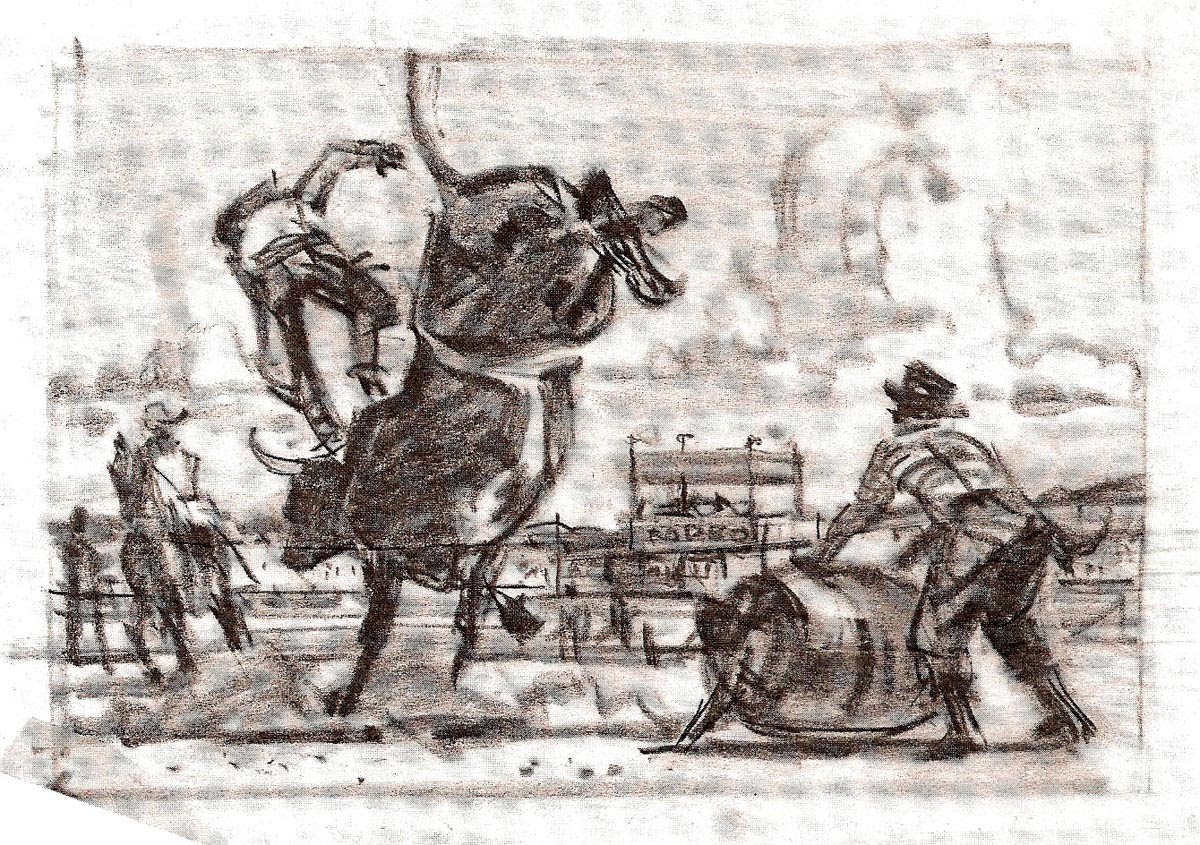 There were theme calendars, and several calendar publishers in those days. 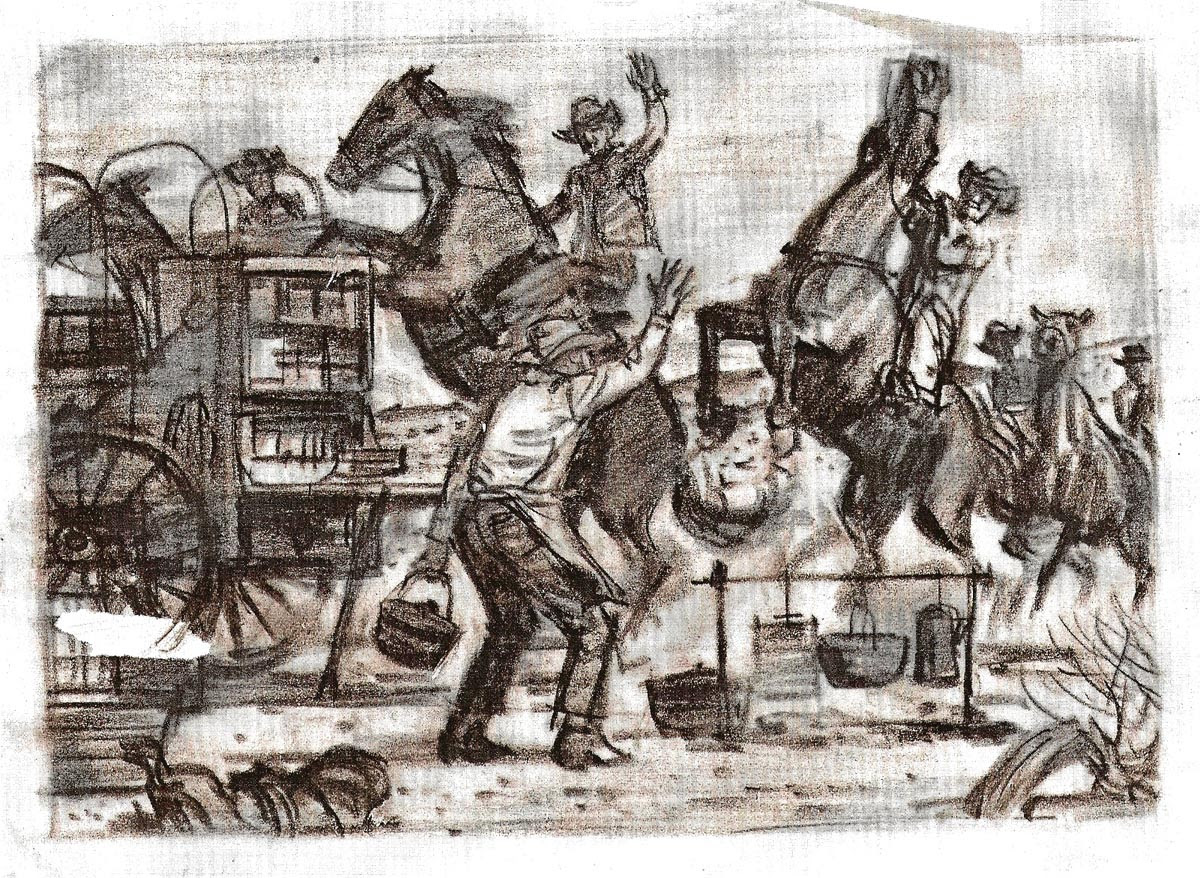 The project was really too ambitious for the time available between jobs. 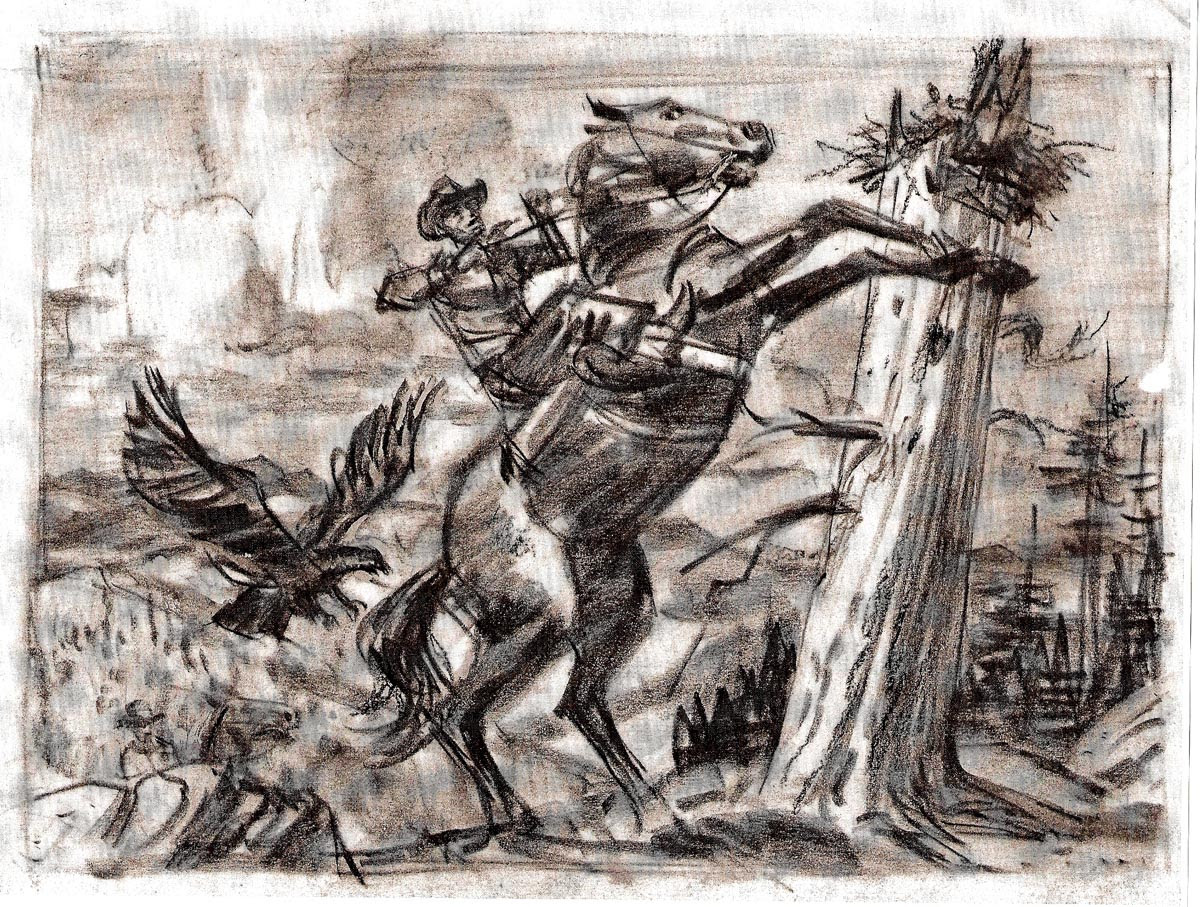 These were pretty much off the top, and a lot more time and research would have been needed to go further.

* Charlie Allen's Flickr set.
Posted by leifpeng at 9:42 AM

Re the football illo.I see a clear Dorne vibe in the execution of the hands,was he a big influence on you then? I love the glass carriers illustration,its a simple idea but beautiful in its realisation. Could you say how long would a piece like that would have taken?

Always liked Dorne's work but it was miles from my interests. I cartooned from childhood on....and college notes are full of cartoons done in boring lectures. To me, cartooning was pictorial comedy....and about exaggerated movements and gestures. Never interested in the political or satirical cartoons....although they are effective. Hargit, I've heard that before. If I were a shrink, I'd say you were taken to the circus when too young and impressionable. Don't think you're serious, though. If you've ever modeled, it's tiring and tedious....and even a clown can't hold a happy face for a whole day! Bandito, the glass carriers took maybe a day and a half....a fast technique. Done in gouache before acrylics came along.

Were are the Clowns?
Thanks for reminding me of a song which I had completely forgotten. This beautiful simple piano harmony and its major minor variations. Barbara Streisand's version is not bad - I just Youtubed it out.

Nowadays they are talking about admitting Rugby to the Olympic Games. Your nice cartoon says it all:
YES!